A Look At Ladies' Shawls In Classic 19th Century Literature 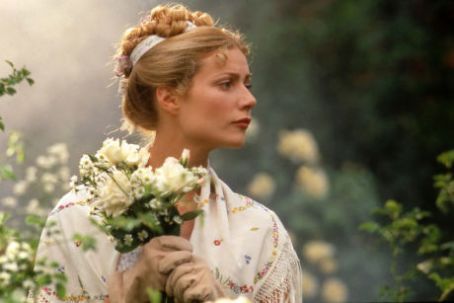 From the Regency era to the end of the 1860s, there was no fashion accessory as versatile and ubiquitous as the shawl. Available in all weights of fabrics, including silk, lace, muslin, and cashmere wool, and priced for all budgets, shawls graced the shoulders of women in every strata of society. They were no less well-represented in art and literature of the day. Shawls were referenced in the novels of such literary luminaries as Elizabeth Gaskell and William Makepeace Thackeray. They were also featured in countless portrait paintings, draping the figures of fashionable 19th century ladies of every age. 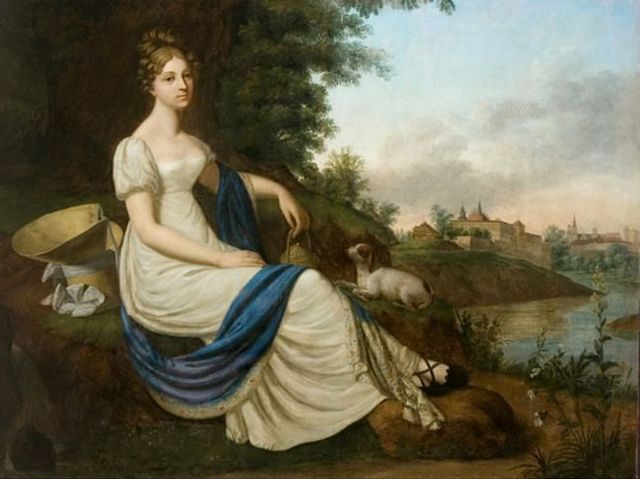 The lightweight Empire-style gowns of the Regency era provided little protection against the elements.  As a result, shawls and wraps were a practical necessity. In Jane Austen’s novel Emma (1815), Miss Bates insists that her mother wear a shawl when she goes visiting. Miss Bates and her mother are not wealthy by any means. For them, the shawl as an accessory is purely utilitarian. As Miss Bates explains to her guests:

“I made her take her shawl—for the evenings are not warm—her large new shawl— Mrs. Dixon’s wedding-present.—So kind of her to think of my mother! Bought at Weymouth, you know—Mr. Dixon’s choice. There were three others, Jane says, which they hesitated about some time.” 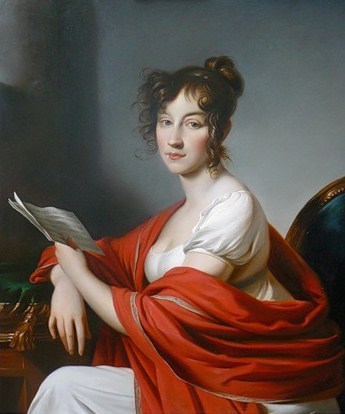 Portrait of an Unknown Woman by Alexander Molinari, 1800

For those ladies of means, a shawl could be as fashionable as it was eminently practical. The 1806 edition of La Belle Assemblée describes the current fashion in shawls as follows:

“Large shawls of silk or mohair were also much worn, and in various shapes; some in the form of a flowing mantle, appending from the shoulders, with a hood; others à la Turque; others again square.  But the most elegantly simple style of either the shawl or Egyptian mantle that arrested the fancy, were those of plain or japanned white muslin, with a large Egyptian border of deep green, in tambour or embroidery.” 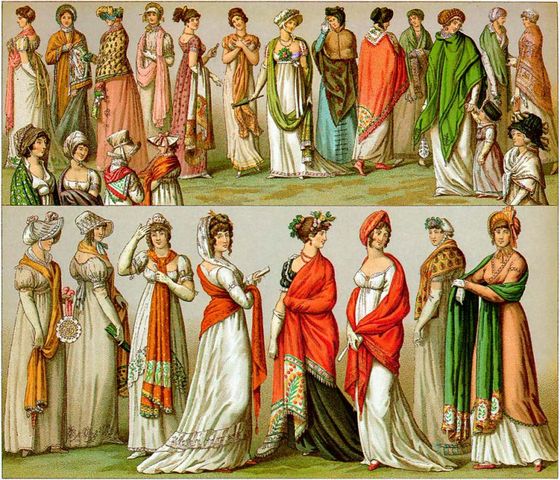 A Variety of ways of Wearing Shawls in early 19th century France, Lithograph, 1802-1814

The fashion in shawls changed little over the years. A plain background with a variegated border was still the ideal. The 1812 issue of La Belle Assemblée reports that for winter dress fashions:

…a fine cashemire [sic] shawl, with brown background, and richly variegated border, is generally thrown over the dress, in which is united both comfort and elegance.”

And for the spring dress fashions:

“…over these is thrown, in elegant drapery, a long Indian shawl of the scarf kind, the colour of the palest Ceylon ruby, the ends enriched by a variegated border…” 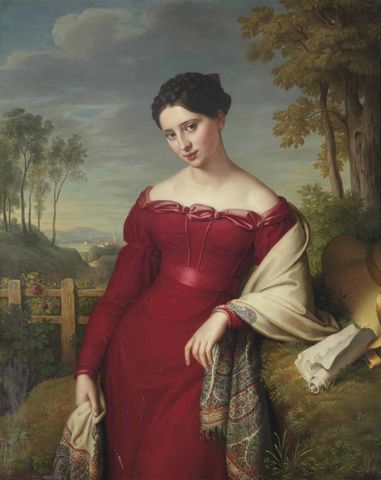 Portrait of a Young Lady in a Red Dress with a Paisley Shawl by Eduard Friedrich Leybold, 1824.

Throughout much of the 19th century, cashmere (or Kashmir) shawls were at the forefront of elegant fashion in scarves and wraps.  Made from the wool of the sheep in the Kashmir region of India, they were as luxuriously soft as they were warm. In William Thackeray’s novel Vanity Fair (1848), Amelia Sedley’s brother Joseph brings her back two white cashmere shawls from India. These shawls are much coveted by Becky Sharp. Thackeray writes:

“When Rebecca saw the two magnificent Cashmere shawls which Joseph Sedley had brought home to his sister, she said, with perfect truth, ‘that it must be delightful to have a brother,’ and easily got the pity of the tender-hearted Amelia for being alone in the world, an orphan without friends or kindred.” 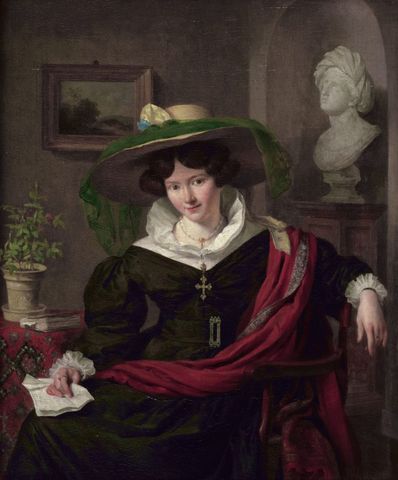 As the century progressed, ladies' fashions evolved. Skirts grew bigger and so did sleeves. Waistlines lowered, and instead of a single petticoat, a lady now wore several. One might expect shawls and wraps to have become less popular. Women were surely warmer now in all their layers. However, as a fashion accessory the shawl continued to be as vitally important to a woman’s dress as it ever had–and those shawls and wraps from India still reigned supreme.

“[Margaret] touched the shawls gently as they hung around her, and took a pleasure in their soft feel and their brilliant colours, and rather liked to be dressed in such splendour— enjoying it much as a child would do, with a quiet pleased smile on her lips.” 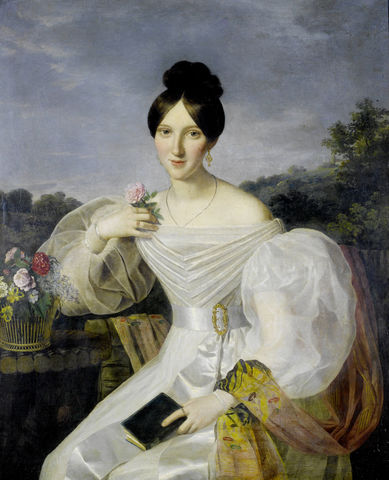 A lady in a white dress and shawl before a Viennese landscape by Ferdinand Georg Waldmüller, mid-19th century

“Helen had set her heart upon an Indian shawl, but really when I found what an extravagant price was asked, I was obliged to refuse her.  She will be quite envious when she hears of Edith having Indian shawls. What kind are they? Delhi? with the lovely little borders?” 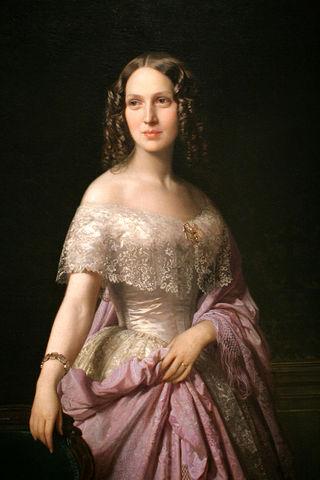 Shawls and wraps are well represented in all the works of Charles Dickens, from the “pinched bonnet and poor little shawl” of Miss Flyte in Bleak House (1852) to the grand aspirations of Herbert Pocket in Great Expectations (1860). In the latter novel, Pip relates a conversation with Herbert which gives us some insight into the continuing popularity of the Indian shawl:

"I think I shall trade," said [Herbert], leaning back in his chair, "to the East Indies, for silks, shawls, spices, dyes, drugs, and precious woods.  It’s an interesting trade."

"And the profits are large?" said I.

I wavered again, and began to think here were greater expectations than my own. 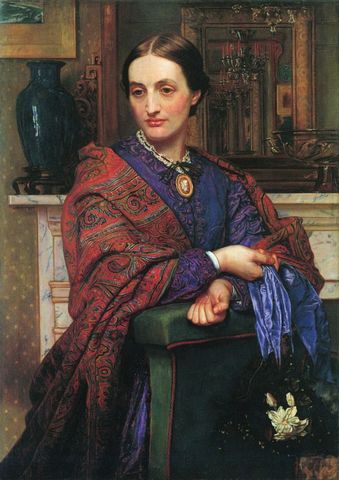 By the 1870s, the popularity of the cashmere shawl was in decline. This had less to do with the dictates of fashion and more with global politics and famine. As Sir Walter Roper Lawrence writes in his book The Valley of Kashmir (1895):

“The shawl industry is now unfortunately a tradition—a memory of the past. The trade received its deathblow when war broke out between Germany and France in 1870, and I have been told by an eye-witness of the intense excitement and interest with which the Kashmiri shawl-weavers watched the fate of France in that great struggle—bursting into tears and loud lamentations when the news of Germany’s victories reached them.”

He goes on to write that any hope of the shawl weaving industry being revived was dashed when famine visited the Valley of Kashmir in 1877-1879. According to Lawrence, none suffered so greatly during that famine than the poor shawl-weavers.

This did not mean that shawls and wraps as a whole were unpopular. Whether made of gauze, silk, or lace, a well-draped shawl was still an integral part of women’s fashions well into the 20th century. Even today, shawls and wraps have their place in the wardrobe of any well-dressed lady. And as you can see from the portraits I have included, precious little about the patterns and draping of shawls has changed since the early Regency. 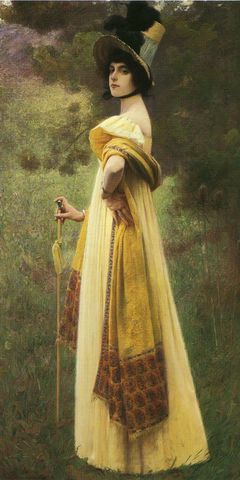 The Shawl by Charles Sprague Pearce, 1900

In closing, I will add that for an author of historical romance a shawl can be a wonderful prop. How many times has a critical conversation been overheard by a young lady who has returned to a room to retrieve the shawl she had left behind? And how many times has a gentleman been sent out to the carriage or back into the house to fetch his lady’s forgotten wrap? There are impoverished characters who disguise an old gown with a decorative shawl and wanton characters who greet their lover wearing a shawl and nothing else. Classic literature provides us with countless examples of how to utilize a shawl as a prop or plot device and historical romance novels provide us with many more. The only limit is your imagination.

The History of the "Confidence Man"

Tags: history , fashion , 19th century , Mimi Matthews , fashion, , history
Support Feminist Media!
During these troubling political times, independent feminist media is more vital than ever. If our bold, uncensored reporting on women’s issues is important to you, please consider making a donation of $5, $25, $50, or whatever you can afford, to protect and sustain BUST.com.
Thanks so much—we can’t spell BUST without U.