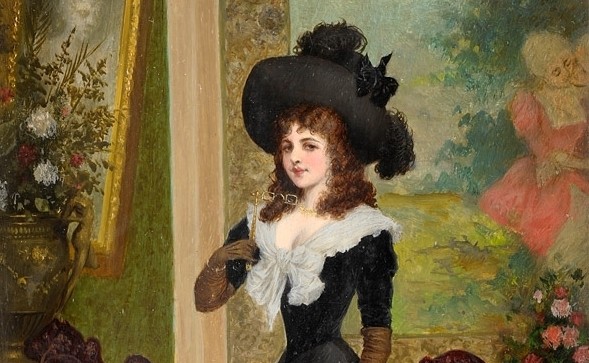 A lorgnette is, quite simply, a pair of spectacles mounted on a handle. The precursor to modern opera glasses, lorgnettes were a common sight during the 19th century at the theater as well as the opera. And since the name lorgnette derives from the French word lorgner—meaning “to ogle” or “to eye furtively”—one can only imagine the many uses to which a curious socialite in the balcony might have put them. Whether employed to sneakily spy on a rival across the way, stealthily investigate a young gentleman down in the pit, or to merely watch the action on the stage, a lorgnette was an indispensable accessory for the 19th century lady about town.

Until the 17th century, optical aids were primarily the province of men. However, with the invention of the lorgnette, women became much more involved in the world of eyeglasses. Feminine interest in the lorgnette inspired many new designs, including the “jealousy lorgnette.” Author Kerry Segrave describes the jealousy lorgnette in her book Vision Aids in America: A Social History of Eyewear and Sight Correction:

“Like all the early lorgnettes, it was constructed for one eye only and resembled one half of a fair-sized modern opera glass. Besides having a lens at each end, the jealousy lorgnette contained an oblique mirror through which, when looking into it from a hole hidden in a decorative part in the side of the device, one could see who was behind or to one side of the viewer.” 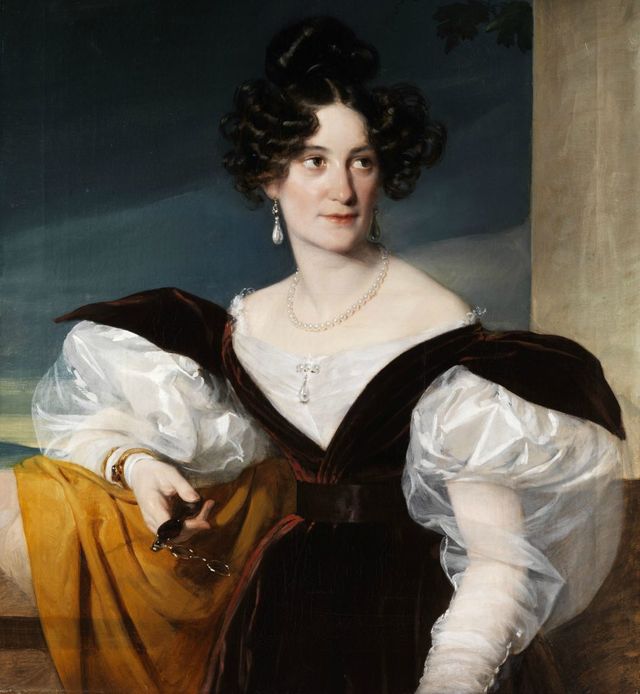 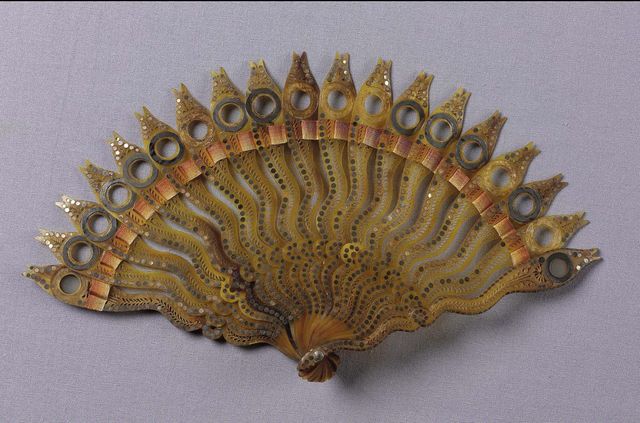 The lorgnette was at its most controversial during the 18th century. Marie Antoinette is credited with inventing the “fan lorgnette,” wherein the hidden lorgnette was placed within the fan itself. According to Segrave, soon lorgnettes were hidden in meshes of lace and “in any spot the imagination could devise.” Women flirted through these hidden lorgnettes and, in his book The Eye in History, author Frank Joseph Goes states, “The lorgnette was part of the elegant games of high society, in the same way as the ‘language’ of the fan.”

The early 20th century magazine, Hygeia, explains the effect of the controversy and scandal surrounding the 18th century lorgnette:

“…the more aroused and controversial public opinion became, the more popular grew the lorgnette of every type and in every conceivable form; and whoever laid even the least claim to distinction or style sported a variety of them.” 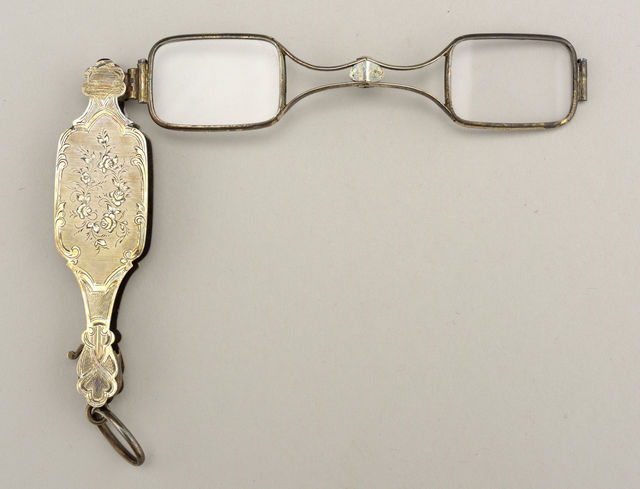 Lorgnette of Gold and Glass, mid-19th century. (Courtesy of The Smithsonian Design Museum.)

By the 19th century, the lorgnette had become more practical and fashionable than scandalous. Fashion historian C. Willett Cunnington even declares that in 1893, “Nearly every smartly dressed woman wears a lorgnette.”

Early prototypes of the lorgnette were made with an unjointed handle. Later incarnations had a jointed handle and, by the 19th century, a spring had been added which allowed the lenses to fold together within the handle, which also served as a case. The 1915 American Encyclopedia and Dictionary of Ophthalmology states that:

“Such a device, manipulated with one hand, can be quickly placed before the eyes and is convenient for momentary use by presbyopes, who thus avoid being burdened with other glasses.” 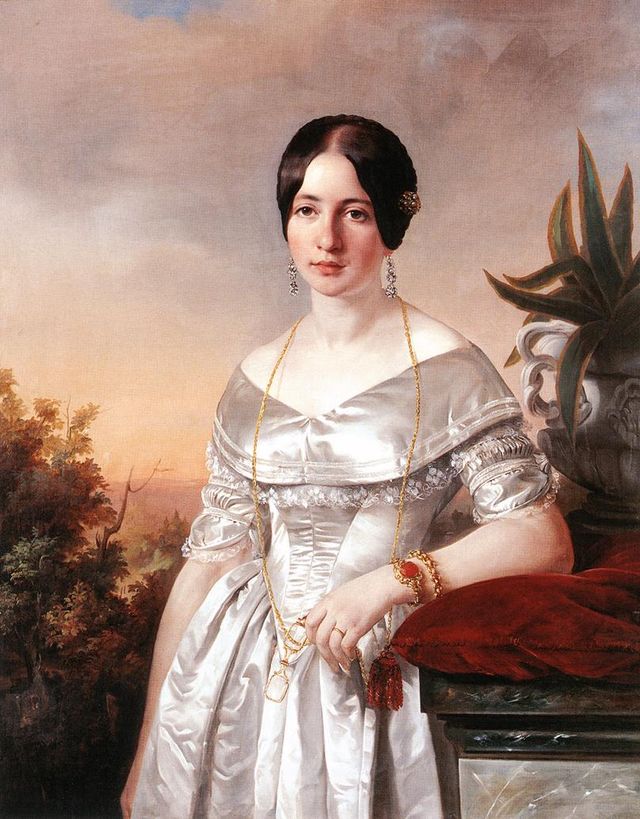 Lady with a Lorgnette by Jozsef Borsos, 1856.

In this way, the lorgnette transcended its role as an accessory for the theater or opera, becoming instead an accessory of daily, practical use. Many 19th century figures kept a lorgnette permanently on their person. Alexander I, for example, was known to hide his lorgnette in his pocket. Because he lost it so frequently, he ultimately tied it to a button on his sleeve and was observed, by many contemporaries, to constantly bring up to his eye “a gilt lorgnette that was hanging from his right hand.”

For 19th and early 20th century ladies, a folding lorgnette was also frequently hung from a chain around the neck or worn as a brooch. And in the 1930s and 1940s, it was quite popular to wear a dress clip worn on the front of a dress neckline, a pocket, or lapel which concealed a lorgnette inside. 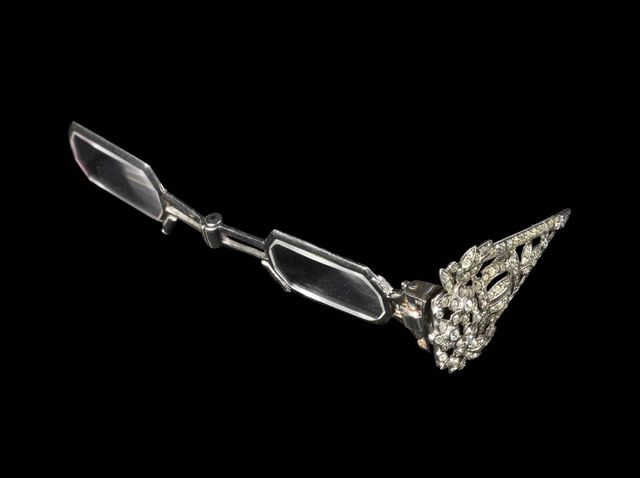 It should be noted that the word lorgnette is often used to describe both the “miniature telescope” or “prospect/perspective glasses” of the 17th and 18th centuries as well as the 19th and 20th century folding spectacles, which snapped into a protective case or handle. The invention of the latter variety of lorgnette is credited to Englishman George Adams in 1785. Adams original design was meant to be carried in the pocket. Later improvements in design were made in 1825 by English optician Robert Betell Bate who patented handled spectacles. According to author J. William Rosenthal in his book Spectacles and Other Vision Aids, Bate’s design included a hinge in the bridge which allowed for the two lenses to be folded together as one and used as a magnifying glass. Later, a spring would be added so that “…moving a small lever in the lorgnette handle would unlatch a catch and allow the lenses to spring apart.”

Rosenthal also notes that “…although popular with women as a fashion accessory and as a necessity for clarity of vision, public use of the lorgnette was decried as poor decorum because it was often used for ogling neighbors or strangers.” 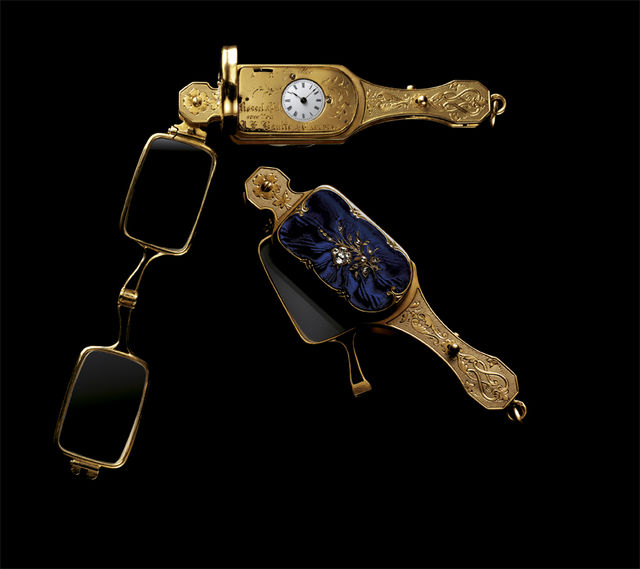 Lorgnettes were made of a variety of materials including tortoiseshell, horn, bone, ivory, metal, enamel, mother-of-pearl, silver, gold, and jewel encrusted. Rosenthal describes lorgnette cases of the early to mid-19th century as being “beautifully decorated.” Cases often contained a “silver cartouche” and some of the tortoiseshell cases were “protected on the edges with a band of silver.” Further embellishments included cases with “enameling of decorative designs or pastoral scenes” which were encrusted with precious stones. 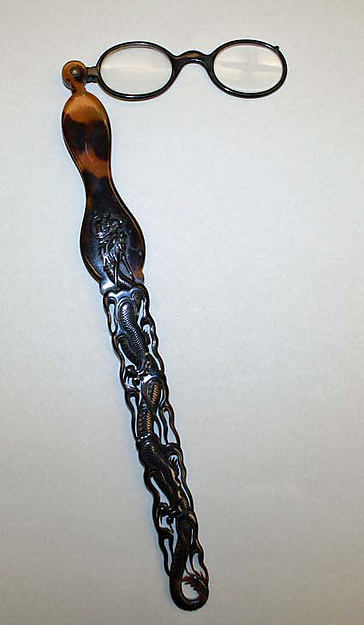 From the mid-19th century to the end of the 1800s, Rosenthal reports that lorgnettes typically had longer handles, measuring as much as 20 to 30 centimeters in length. The handles were either straight or curved and they were often heavily embellished. Handles were made of real and imitation tortoiseshell, mother-of-pearl, and silver. The real tortoiseshell might be carved or plain, while the imitation was frequently molded to a design. The silver lorgnette handle might be embossed or ornately engraved.

The era of the lorgnette is not at an end. When attending the opera or theater, one can still occasionally see lorgnettes mingled amongst more contemporary varieties of opera glasses. Recently, while shopping, I even encountered a sales associate who wore a single lens lorgnette around her neck on a chain to enable her to see the labels of make-up products. That is a purely anecdotal way to close a fully cited article, I know, but it struck me how much in the present, despite all our modernity, the remnants of 18th and 19th century life still manage to pop up in purely practical ways. So next time you are out and about wearing your Regency era shawl, don’t forget to bring along your 19th century lorgnette. It is yet another historical fashion accessory which can be easily incorporated into your 21st century wardrobe today.

Tags: lorgnette , history , mimi matthews , 17th century , 18th century , 19th century , opera , theater
Support Feminist Media!
During these troubling political times, independent feminist media is more vital than ever. If our bold, uncensored reporting on women’s issues is important to you, please consider making a donation of $5, $25, $50, or whatever you can afford, to protect and sustain BUST.com.
Thanks so much—we can’t spell BUST without U.