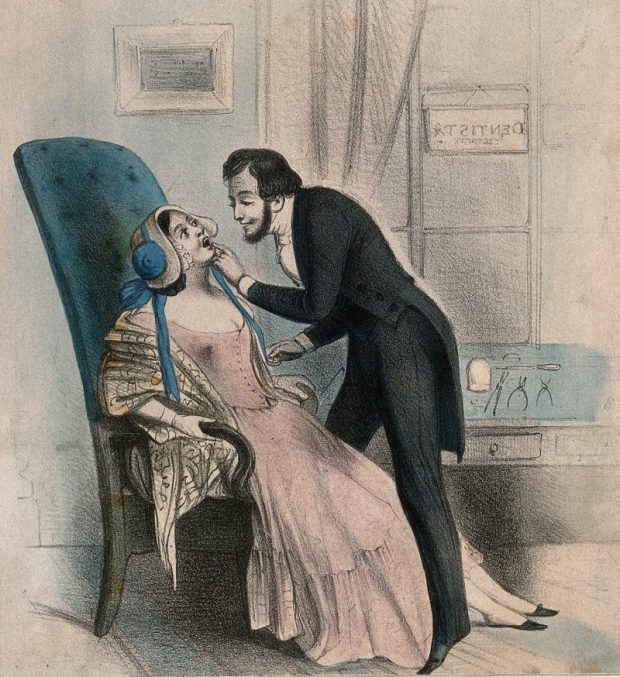 I like to make my historical novels as authentically Victorian as possible. However, when it comes to the subject of dental health, I’m guilty of fudging the facts. The truth is, not everyone in the 19th century had strong white teeth. Rather the opposite. In an era with no Crest Whitestrips, no veneers, and somewhat primitive dentistry, you were more likely to encounter a hero with brown or missing teeth than one with a gleaming white smile.

That’s not to say that the Victorians were ignorant of proper dental hygiene. In fact, some Victorian publications advocated brushing as many as five times a day. As the 1873 book The Teeth and How to Save Them states:

“To secure proper cleanliness, pleasant taste and purity of breath, the teeth ought to be cleansed five times a day; once after each meal, once before retiring and once during the morning ablutions.”

When brushing, Victorians were advised to use castile soap, or a paste, powder, or liquid dentifrice. Dentifrices were widely available at local chemists’ shops. Some were flavored or scented with essence of roses, mint, or vanilla. Others were made from popular recipes, containing such ingredients as chalk, camphor, or quinine. The more abrasive the mixture, the better it was considered for the purpose of whitening the teeth. 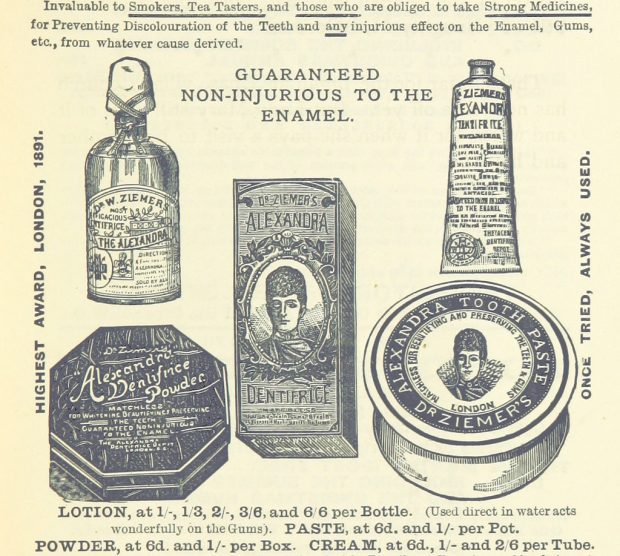 Many Victorian methods for whitening the teeth were less than ideal. Charcoal, ground into a paste, was one of the most popular of this variety. The 1860 edition of Mackenzie’s Five Thousand Receipts in All the Useful and Domestic Arts provides a recipe for a teeth whitener made of charcoal and honey. In the short term, such a mixture did a creditable job of whitening the teeth; however, in the long term, charcoal inflamed the gums and often led to periodontal disease.

Bleaching was another option for whitening the teeth. Oxalic acid had been in use for just such a purpose from as early as 1830. Other methods of teeth bleaching involved the application of solutions of diluted nitric acid, chloride of soda, or cyanide of potassium. These solutions could be quite injurious to the teeth and any surrounding tissue, which was why it was recommended that they never be applied except by a qualified dentist. 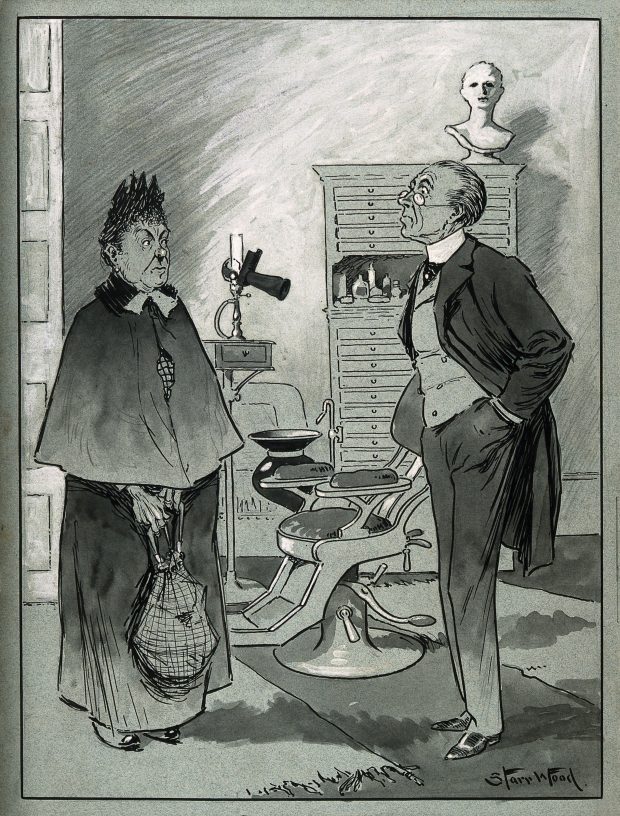 There are many horror stories of Victorian teeth whitening gone awry. For example, in his 1848 book A Popular Treatise on the Teeth, dental surgeon Mayo Smith relates the tale of two “peregrinating dentists” who passed through town selling a solution for whitening the teeth. At each house, the dentists applied the solution to the resident’s teeth and:

“As the article certainly did whiten the teeth in a most expeditious manner, and as their charge was less than that of the regular dentist, many persons were induced to have their ‘teeth cleaned.’”

Unfortunately, after a few days had passed, the treated teeth “grew black, were denuded of the enamel, and became so extremely sensitive, that they had to be extracted.” Upon analysing the solution, it was discovered to be diluted sulfuric acid, one of the most “pernicious substances which could come in contact with the teeth.” 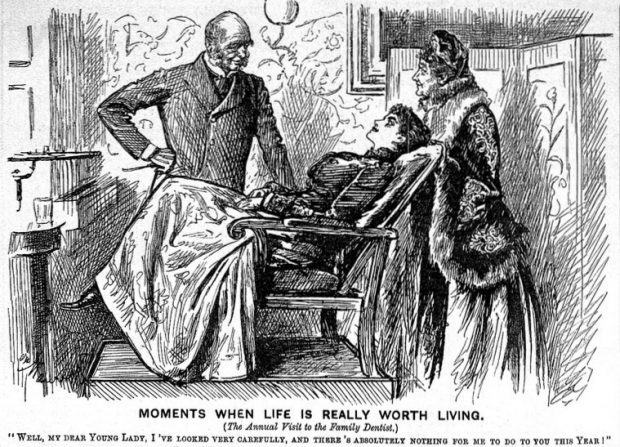 Caricature: Moments when life is worth living, Punch, 1891. (Wellcome Collection. CC BY 4.0)

“A young lady who had white teeth would look as if she were about to bite when she showed them.”

Instead, Belgravia advocated avoiding all “pastes, lotions, and powders which profess to make the teeth white” and leaving teeth the color that nature had made them—even if that color was not as brilliant as one might desire. 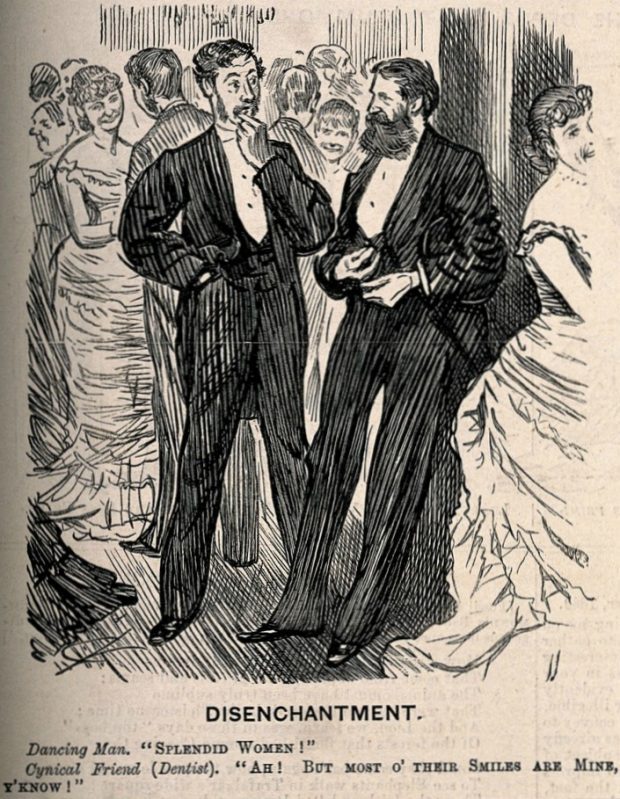 A man commenting on the beauty of women at a ball, his friend (a dentist) implies that the perfection of their smiles is due to him. Wood engraving after C. Keene, c.1882. (Wellcome Collection. CC BY 4.0)

Today, we know a great deal more about dental hygiene and we have countless ways to improve the appearance of discolored or damaged teeth. Still, I can’t help wondering if future generations will find some of our methods as barbaric and dangerous as we find those of the Victorians. What do you think?

Top photo: A dentist looking at a tooth of a patient, 19th century. (Wellcome Collection. CC BY 4.0)

Tags: Victorian era , teeth-whitening , toothpaste
Support Feminist Media!
During these troubling political times, independent feminist media is more vital than ever. If our bold, uncensored reporting on women’s issues is important to you, please consider making a donation of $5, $25, $50, or whatever you can afford, to protect and sustain BUST.com.
Thanks so much—we can’t spell BUST without U.