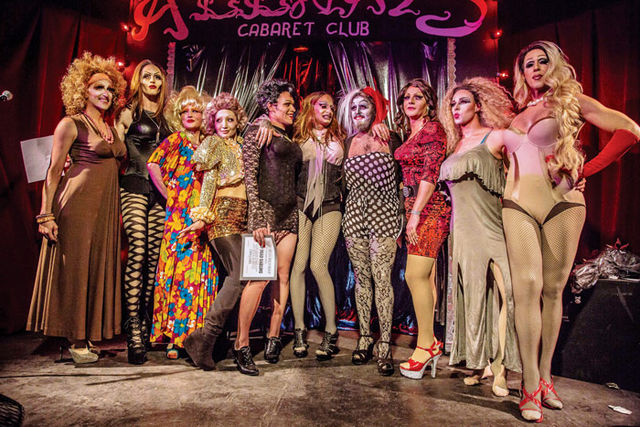 I’ve been obsessed with drag for as long as I’ve known it existed. I remember watching The Adventures of Priscilla, Queen of the Desert as a tween and loving it. So when I found out that one of my favorite local New Orleans performers, Vinsantos, offered a program that would teach anyone the art of drag, I was in.

I enrolled in Cycle 2 of the New Orleans Drag Workshop in 2014 (Cycle 8 is about to start), along with 11 gay men and one other woman. The eight-week program is free, but you have to apply and prove you’re serious. Exploring gender is a big reason people do the workshop, but performance art and self-expression also play huge roles. Vinsantos puts a big emphasis on performance. Each participant chooses a song to lip sync to at the final “draguation”—mine was Carol Burnett’s “Little Girls” from Annie. We also learned to do drag makeup (Raja, of RuPaul’s Drag Race, taught us), studied costuming (we built fake boobs with pantyhose and carved mattress foam into hip and butt padding), and created drag personas (mine is Glamdromeda Strange).

A woman performing as a woman, à la Victor/Victoria, is often referred to as a “faux queen” or “bio queen,” though I prefer simply “performance artist.” After my draguation, I was the first cis woman to be a paid drag performer at the now defunct Bourbon Street drag club Lucky Pierre’s. And there are a growing number of us. Fauxnique (aka Monique Jenkinson) is one of the most well-known female drag queens. Want to know more? Female drag queen Brandi Amara Skyy literally wrote the book on the topic: Faux Queens—Fauxing the Real: Biological Women, the Art of Drag, and Why the Real is Drag. Unleashing your inner drag queen is a little like tapping into your inner superhero. It can be incredibly empowering and confidence boosting to give yourself permission to embrace your weirdness and express the deepest parts of who you really are. You better work.

By Mallory Whitfield
Photo by Roy Guste; the author as Glamdromeda Strange (third from left) at Draguation
This article originally appeared in the August/September 2018  print edition of BUST Magazine. Subscribe today!

"RuPaul's Drag Race's" Peppermint Is Making A Documentary About Being A Trans Drag Queen: BUST Interview