A Queer Catholic On The Met Gala And "Heavenly Bodies" 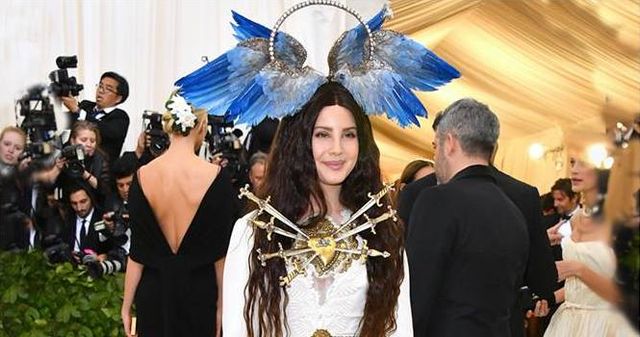 The Met's exhibition on Catholic fashion, "Heavenly Bodies: Fashion and the Catholic Imagination," is on display through October 8th. Here, a queer Catholic shares their thoughts on "Catholic fashion" and the Met Gala.

I love the Met Gala. It combines everything I love: fashion, judging celebrities, and incredibly specific themed parties. When I was little and flipped through magazines covering it with my mother, she would tut at the cutouts and exposed skin and remind me that modest was hottest. I took that to heart, going so far as wearing thick wool tights to my southern Catholic high school every day.

Once I traded Catholic school for women’s college and plaid skirts for crop tops and bermuda shorts, it was a whole new world. I experimented with my own fashion, and I experimented with girls as well. As it happens, when I’m given the freedom to dress and present anyway I like, I have the space to realize how fluid my gender and sexuality truly is. I’ve evolved so much, and luckily, so has my mother. She’s come around to my eclectic style. She even bought me a vintage Czech side cap for my birthday.

So when the Metropolitan Costume Institute announced the title of their new exhibition, “Heavenly Bodies: Fashion and the Catholic Imagination,” I immediately asked her opinion. She was very cautiously optimistic, as was I. But I was hoping for something different. As a queer Catholic, I wanted something that made a statement but paid homage to the culture I grew up in. What I got was...hit or miss, but what I saw could be grouped into a few categories:

Okay, we knew this was happening going in. Everyone does Sexy Nun. There are more nuns at a Halloween frat party than at a mid-size Catholic school. But the results were so varied. We had Bella Hadid, who went straight up latex fetish with it, and Misha Nonoo, who went Quaker schoolmarm. The most accurate take was probably Greta Gerwig’s billowy The Row ballgown, simulating the uniform and humble looks of Carmelite habits. Then there was Lily Collins, whose dress was sheer and structured. She accessorized it with a single tear down the cheek, a reference to the Weeping Madonna story/legend/folktale (depends on who you ask.) Of course, in between, you had edgy snoozers like Liza Koshy’s Wednesday Addams getup.

Our Lady of Sorrows, Met Ball edition. Blood, sweat, tears (and glam!) by @FionaStiles and @GregoryRusselHair. Details by @Cartier and @GivenchyOfficial...

Sexy Nuns’ partying cousin Sexy Vestments is here to make a statement. Of course, Rihanna springs to mind in her pearl-encrusted mitre (aka the “pope hat”) and robes. Taylor Hill went with a Cardinal-esque approach, wearing a black dress trimmed with red. In a more casual take, Tessa Thompson wore a Roman collar-inspired choker, looking like a cool youth pastor in the most glamorous diocese.

But the best interpretation, and the best menswear look by far, was Chadwick Boseman, who wore a cream cape, like the white vestments worn at Easter and Christmas. Sexy Vestments was the most controversial of the categories, but was perfectly on theme and taught quite a few people about the difference between cultural appreciation and appropriation. After all, Rihanna consulted with actual clergy throughout the design process. While my mother didn’t love it, I thought the conversation it raised was absolutely necessary.

The Joans of Arc

One of the weirdest trends this year was the sheer number of people who came dressed as some interpretation of Joan of Arc: she is, after all, probably the best-known saint, and she has an iconic look to boot. The first look came from Riverdale’s Lili Reinhart, who chose a short silver dress with a long organza train. The only real Joan touch was the metalwork bodice. I thought it was a nice homage, but ultimately a juvenile choice. Then, Shailene Woodley arrived looking like a Spanish conquistador, in a armor-style short dress with a high neck, long sleeves, and ruffles at the cuffs to boot.

thank you @ralphlauren. not going to lie about how fierce i felt wearing them boots and this epic custom number. shout out to the design team and tailoring team: what you do and how seamlessly you do it continues to blow my mind. #MetGala #metgala2018

I thought it was an embarrassing coincidence, but then Michelle Williams walked the runway in a structured silver dress with studded leather shoulder details, I realized it was a trend. This was only further confirmed by Zendaya, Heir Apparent to the Met Gala (behind Rihanna) who wore a dress that bordered on full saint cosplay. She even had the blunt bob and short French bangs. She kept to the theme and didn’t skirt around who she was emulating.

I went to da met and was super Italian

I’ve never heard my mother respond to an outfit like she responded to Ariana Grande’s Vera Wang gown. Printed with images from the Sistine Chapel and covered with an airy nude tulle, my mom cooed over it and told me I should have worn something like that to prom. Meanwhile, I was in love with Lana Del Rey’s look: just like the Catholic Church, it was ripe with representation. There was a pierced heart, wings from her head (as we are taught angels have no bodies), and what could best be described as “eyes on a stick,” in reference to St Lucy, most commonly portrayed holding her eyes on a plate.

We both also had a soft spot for Mindy Kaling, whose baroque crown resembled that of Our Lady of Cobre, the patron of our hometown parish. Olivia Munn had the best Easter egg in her gold dress: the pattern of the chainmail headdress was the same pattern of the screen that separates the parishioner from the priest in a confessional.

The Met knew going in this theme was a challenge, and the participants either rose to it or went simple. But like anyone who watches any reality competition show will tell you, playing it safe is actually riskier than taking a risk. Just like last year with the technology-themed Gala, people were hesitant to go too out there, but time and time again the courageous ones take the cake. Hopefully, this means we’ll see more ambitious looks next year, educating the masses on another aspect of our world through fashion.

This Tour Of The Met Highlights History's Nastiest Women

Dais Johnston is a junior theatre major at Agnes Scott College. They wear a lot of hats both literally and figuratively, the favorites of each being bowler and theatre director, respectively. They tweet too much and need a nap. Follow them on Twitter and Medium @thegoodolddais.