In The Victorian Era, Women Sent Secret Love Messages With Their Fans 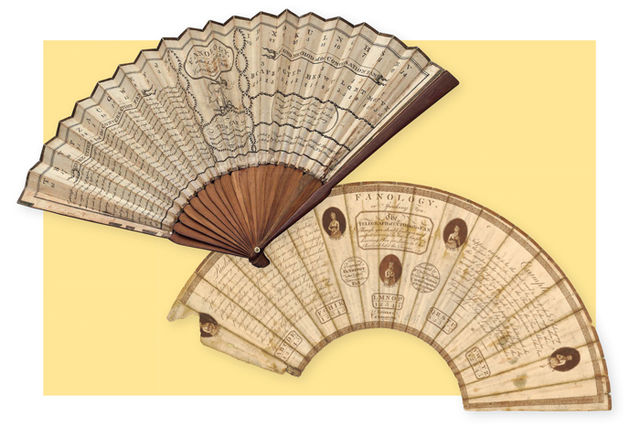 Though Victorians can be credited with helping to popularize—and commercialize—Valentine’s Day, when it comes to holiday fashions, their contribution to history is somewhat lackluster. There were no heart-printed gowns or heart-shaped hats. Instead, as noted in an 1880 edition of the Staffordshire Sentinel, ladies were encouraged to don “something pretty and useful.” In 1880, the most popular variety of that “something” was a richly ornamented fan.

Victorian fans were accessories of great beauty. Most often paired with an evening dress, they could be made to match a lady’s gown—or her mood. There were painted paper fans, feather fans, and fans with sticks made of delicately carved ivory or mother-of-pearl. There were fans illustrated with birds, flowers, or lush pastoral scenes. There were even fans that doubled as dance cards, allowing a gentleman to reserve a waltz or a Scotch reel by writing his name on one of the leaves.

In addition to being beautiful, Victorian fans were also quite practical. It was easy to become overheated amidst the press of bodies at a ball, and the warmth generated by candlelight and gaslight increased the temperature even further. Their beauty and utility made fans popular year-round, but it was their unique relationship to romance that made them particularly suitable as a Valentine’s Day accessory.

Fans’ romantic history long preceded the Victorian era. In the late 18th century, Francis Badini designed a fan which was called the “Fanology, Or Ladies’ Conversation Fan” (above, left). The leaves were inscribed with instructions for various movements a woman could make with it which corresponded to the letters of the alphabet. As an 1891 edition of the Cosmopolitan reported, “With these fans, ladies may converse at a distance on any subject without speaking.”

Though ostensibly made as a novelty item ladies could use to communicate with their female friends, the language of fans also encompassed movements by which a lady might signify her amorous interest to a lover. For this reason, some varieties of conversation fans were known as “Telegraphs of Cupid” (above, right). But the love language of fans was not universal. The movements and corresponding meanings varied slightly, depending on whether one was Spanish, Italian, French, or English. In his 1910 book, History of the Fan, George Rhead explained that, in Spain and Italy, if a lady pressed her half-opened fan to her lips, it meant “you may kiss me.” And if a lady placed the shut fan near heart, she was declaring, “You have won my love.”

Today, there is not much need for a richly ornamented fan. Environmental concerns prevent us from purchasing products made of feathers, ivory, or mother-of-pearl, and air-conditioning obviates the need for manual air circulation. But perhaps, on Valentine’s Day, we might still find a use for the once popular conversation fan. Whether employing it as Cupid’s telegraph or merely to send messages to a friend, it is definitely one historic accessory that could make a 21st-century comeback.

Tags: history , fans , from the magazine , Mimi Matthews
Support Feminist Media!
During these troubling political times, independent feminist media is more vital than ever. If our bold, uncensored reporting on women’s issues is important to you, please consider making a donation of $5, $25, $50, or whatever you can afford, to protect and sustain BUST.com.
Thanks so much—we can’t spell BUST without U.