Behind The Symbol Of "International Women's Year," 1975 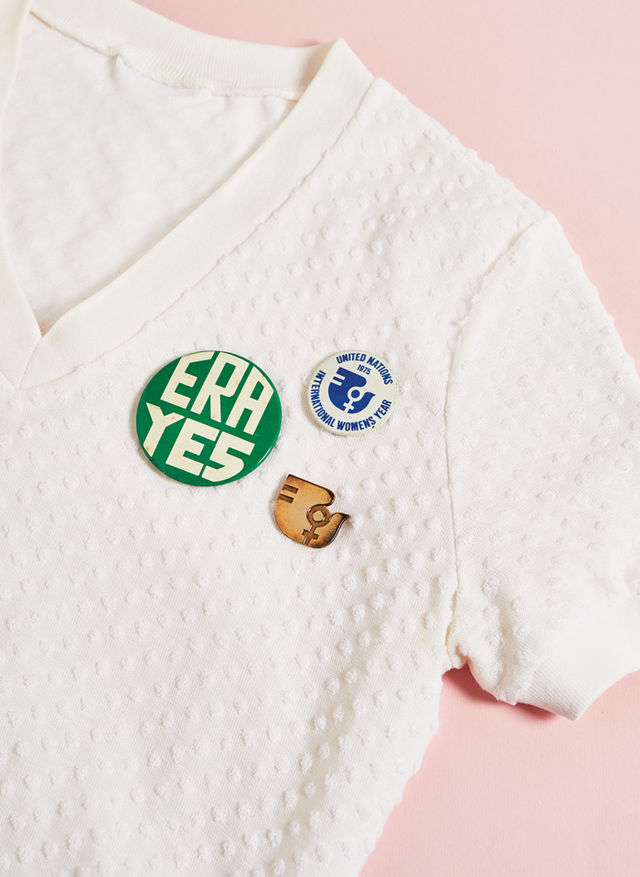 On December 18, 1972, the United Nations General Assembly designated 1975 as International Women’s Year, taking as its themes equality between men and women; the “full integration of women” in economic, social, and cultural development efforts; and peace. It was a hopeful moment for women’s rights in the United States; in 1972, the Equal Rights Amendment passed both houses of Congress and went to the states for ratification, and Title IX was signed into law, barring gender discrimination at federally funded schools.

President Gerald Ford signed a proclamation in January 1974 declaring the following year as International Women’s Year (the press frequently used the acronym IWY), and an official emblem was selected that May. Described by a female New York Times reporter as “a plumpish peace dove with the mathematical equal sign where its tail feather should sprout,” as well as the biological sign for women, the design was the work of Valerie Pettis, a 27-year-old ad agency graphic artist.

The emblem was quickly emblazoned on items available for purchase, including postage stamps, pin-back badges, pendants, and needlepoint canvases. Tiffany even sold a sterling silver version of the dove priced at $18 (about $80 in 2017 dollars). The merchandizing was necessary because IWY was underfunded, both by the U.S. State Department, which gave a paltry $40,000 to the National Commission for IWY, and by the United Nations itself, which allocated only $350,000 for an IWY conference in Mexico City. By contrast, Canada’s budget for its national IWY effort was $5 million, while U.N. funding for the previous year’s non-IWY-related population conference was $3 million.

But the commercialization of IWY also made it resemble “those hard-sell promotional campaigns that are supposed to motivate consumers to buy more doughnuts because it’s doughnut month,” the Times reporter continued. The pins, posters, and stamps were seen as “gimmickry.”

Women’s liberationists used still stronger words. “In the interest of ‘uncovering the problems of women,’ IWY groups will form all over the country to sell IWY jewelry and to get governors and mayors to proclaim 1975 as IWY. They will fill their PTA scrapbooks for 1975 with IWY clippings and pictures,” scoffed the radical publication off our backs before dismissing the whole event as “anti-feminist.”

“What bunk! What irony! Another rip-off, another Madison Avenue token gesture as commercialized as Mother’s Day!” wrote another feminist in Frontiers: A Journal of Women Studies. She namechecked the Tiffany pin as an example of IWY’s “Madison Avenue approach.”

When interviewed by The Times, United Nations staff defended the swag as part of a “consciousness-raising” effort to keep IWY in the public eye. Faced with headlines like the one that appeared in a Pittsburgh newspaper in March 1975, “Apathy Greets World Women’s Year,” this may have been a real concern.

On the other hand, the Tiffany pin may best have symbolized the rifts that became apparent at the Mexico City conference between delegates from the U.S. and other rich countries, and those from less developed nations, where ending poverty was a greater concern than breaking glass ceilings.

From The Museum Of Femoribilia column, by Lynn Peril

Peggy Olson's Got Nothing On The Real Women Behind Maidenform's "I Dreamed..." Ads

Tags: Museum of Femoribilia , Lynn Peril , from the magazine , history , herstory , Internatioanl Women's Year , ashion , fashion history
Support Feminist Media!
During these troubling political times, independent feminist media is more vital than ever. If our bold, uncensored reporting on women’s issues is important to you, please consider making a donation of $5, $25, $50, or whatever you can afford, to protect and sustain BUST.com.
Thanks so much—we can’t spell BUST without U.