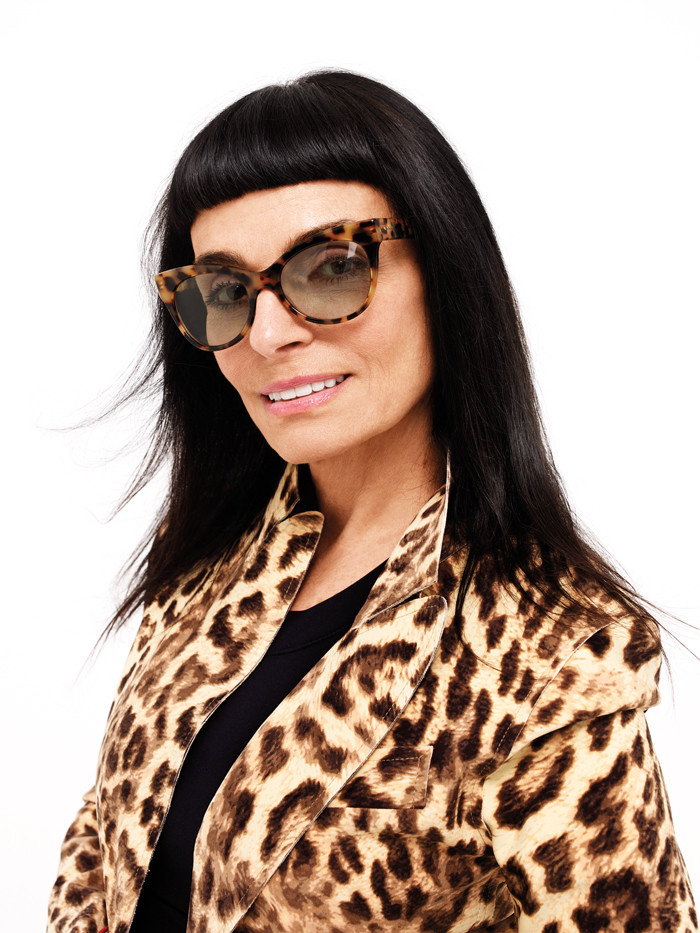 She’s Got The Look

Fashion legend Norma Kamali has been making stars, scenesters, and streetwise city girls look the part for 50 years. Here, the ultimate trendsetter opens up about a life spent ahead of every curve.

Mention the name Norma Kamali in certain fashion-forward circles and everyone will start telling you about the first piece of clothing they ever bought from her namesake label. For 50 years, Kamali has been defining style and doing it all on her own terms. Born in New York in 1945, she longed to be a painter, but instead, studied fashion illustration at the Fashion Institute of Technology. An early job for an airline—where she worked on the first iteration of computers—enabled her to travel and that’s what she did, getting on a plane to London almost every weekend to soak up the new ’60s styles. Inspired by these looks, she brought them home, and in 1968, opened her first boutique in midtown Manhattan. It wasn’t long before she was making and selling her own clothes, quickly attracting the attention of New York’s scenesters. Punk pioneers the New York Dolls came in for tight, stretchy pants. Bette Midler fell for Kamali’s gold lamé. Ian Schrager, impresario of Studio 54, dressed his bouncers in her sleeping bag coats while his dancers inside writhed freely in her form-fitting outfits (she practically invented spandex). And whether you loved or loathed them, shoulder pads in the ’80s were her doing. Her use of gray sweatshirt material for a 1981 collection pre-dated the idea that athletic fabric and styling could easily be worn with heels for a night out—an innovation that’s now a dominant style. Here, I talk with the celebrated 71-year-old about her work on behalf of women, and the fire that keeps her blazing her own trail. 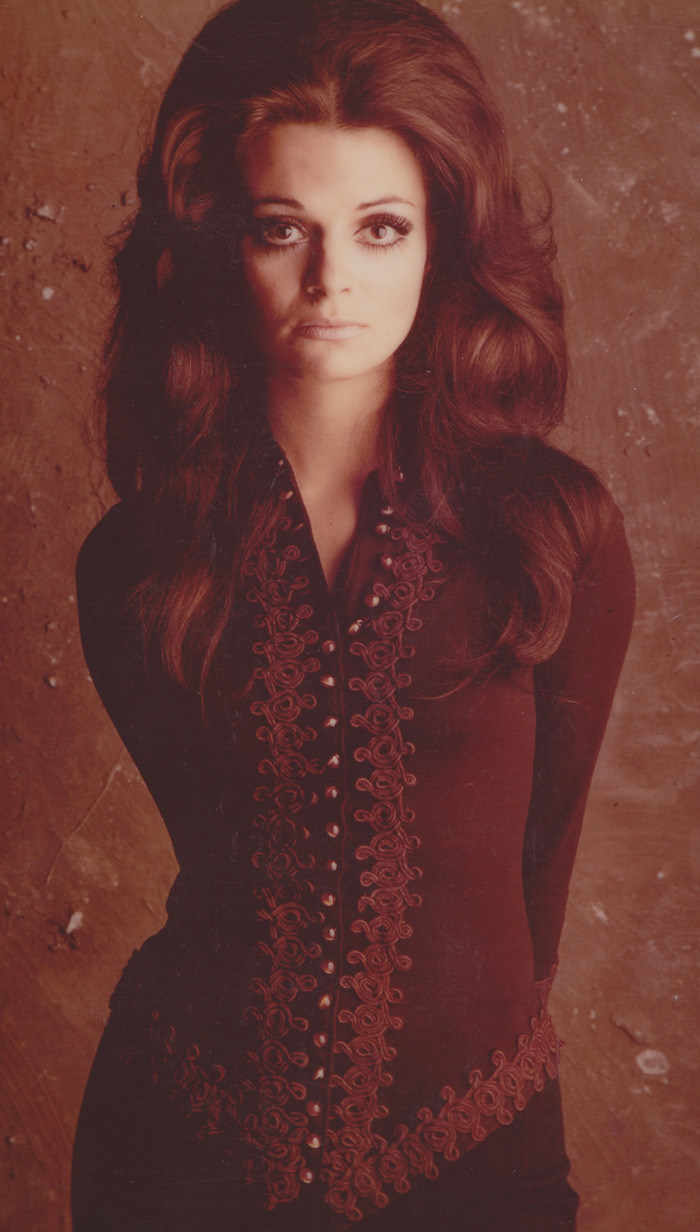 You look incredible! Have you always taken good care of yourself?

In the ’60s and ’70s, you never thought about taking care of yourself because you never thought you were going to die. But in the ’80s, people started to think more about health because our friends were dying of AIDS. My mother was always into fitness and health when I was young, but of course at the time, I thought she was a freak and I didn’t get it. I never did drugs and I don’t drink. As a survival instinct, staying healthy was one of the things I just thought I had to do.

You have a website called StopObjectification.com where you encourage women to “tell their stories of objectification, cleanse their emotional souls, and inspire others to do the same.” What compelled you to start this project?

I’ve been surrounded by women intensely since 1967, and everything I’ve done is for women and about women. I realized that when it comes to how women look in clothes, there is such a heavy psychological cloud that exists over our heads. I started to think about my own experiences having a business at 24 and trying to run things and being in this world in the ’70s when women just didn’t up and start their own business. You just didn’t do that. I understood objectification to the nth degree. This was Mad Men time, and it was OK for someone to pat you on the butt or kiss you on the lips in an office setting. When I walked into my first job interview in the garment center, I had my portfolio that I’d worked so hard on and I had the outfit on that I’d thought about over and over and this guy was there with his feet up on the desk, eating a tuna sandwich. He offhandedly tells me to put down my portfolio, come forward, and turn around for him. It was humiliating. It was devastating. I remember running out in tears. I never told a soul and I never went back to the garment district. But I didn’t realize why until later. All experiences either put us on a course we shouldn’t be on or on a course we should be on. The trauma of that event pushed me to pursue my dreams in London. 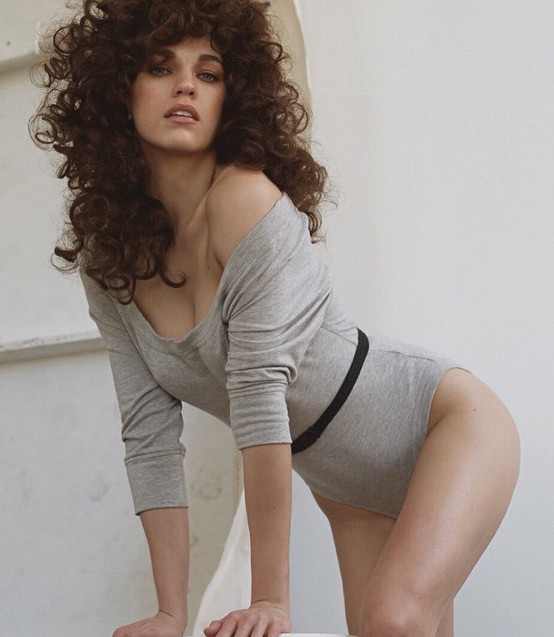 After 50 years in the business you have so many female fans. Why do women love your clothes?

There is something relatable about how you feel in the clothes. There is a time in a woman’s life where that is super important to the development of who she is. It is more of a female thing than anything to do with the clothes. It’s saying something about you. I designed my All In One Dress in 1973. I’d been wearing vintage clothes for years and I wanted to design the vintage clothes of the future, and that was one of those dresses. I understood it couldn’t be stylized and it had to be very versatile and simple and the fabric had to evolve through the years. It had to be a knit and easy to take care of. It’s that feminine thing where you are not beholden to a dress that has to be dry-cleaned or has to be treated special. The more modern we are, the less we want to think about clothes controlling us. I do what I authentically want to do. I am not a copier. 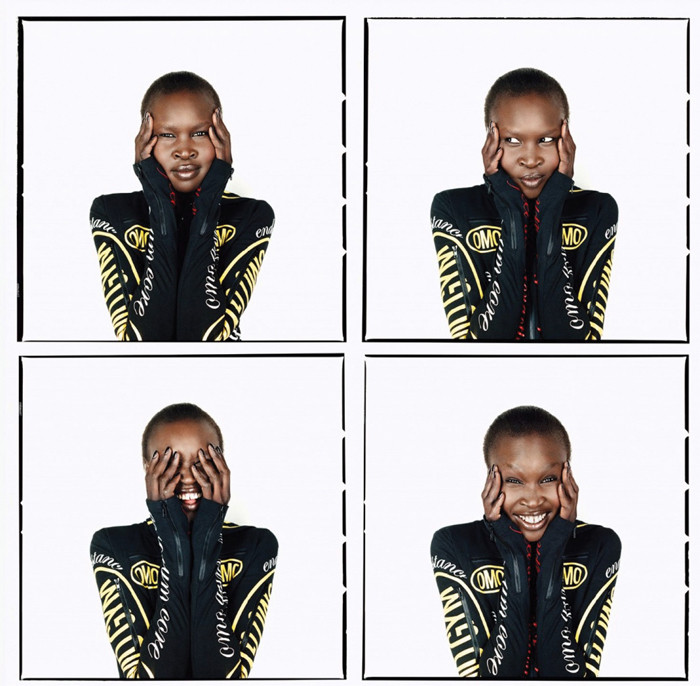 You recently held a vintage sale of your work dating back to the ’70s. Looking over the styles, what strikes you the most?

When I turned 50, I discovered 20,000 pieces of my work in a storage warehouse. I decided that my possessions possessed me and I got rid of everything. I sold things, I donated things, and I just wanted to not be controlled by anything I had done in the past. I thought some of them were gorgeous. With others, I thought, “What were you thinking?” But I was able to look at them unemotionally. I can tell you about each piece because I poured so much of myself into each one, but my instinct and my intuitive sense is to look forward. There are, however, a few things in vintage that I am still doing today, because I also believe that if something is good, you don’t stop doing it. 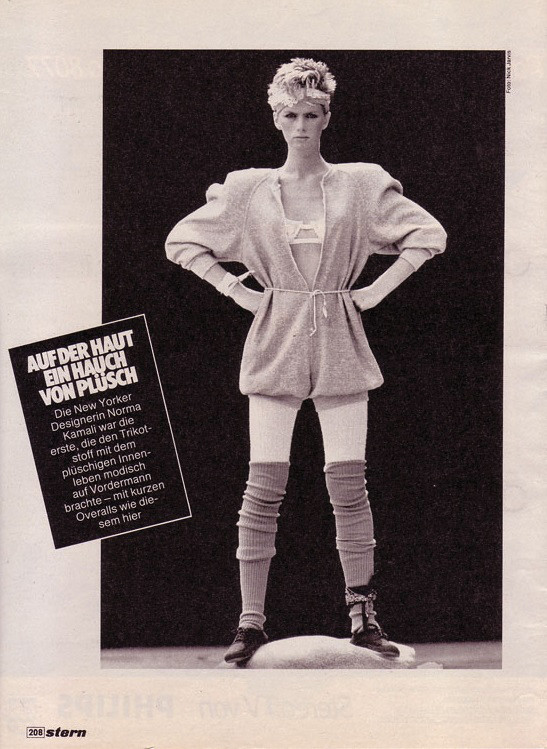 Tell me about the swimsuit you designed that Farrah Fawcett famously wore in her iconic 1976 poster.

I asked Farrah why she chose that suit and she said she loved the red color, and it happened to be in her bag, so that’s what she put on for the photo shoot. Now it’s in the Smithsonian. In fact, that was not one of my favorite swimsuits. There were only a couple that I made to test, but I never loved the fit.

A Victorian jacket with full skirt from 1974's Parachute Collection, made from real parachutes

Who were your early role models?

I think the biggest impact any woman has had on my life is probably my mother, mainly because we didn’t get along that well. I would try every way to understand her, try to figure out how to make it work with her. As a result, there was never a woman who came into my store—celebrity or whatever—who I couldn’t work it out with, who I couldn’t have a relationship with, because the hardest is your mother. My mother was like basic training for how to work with women. 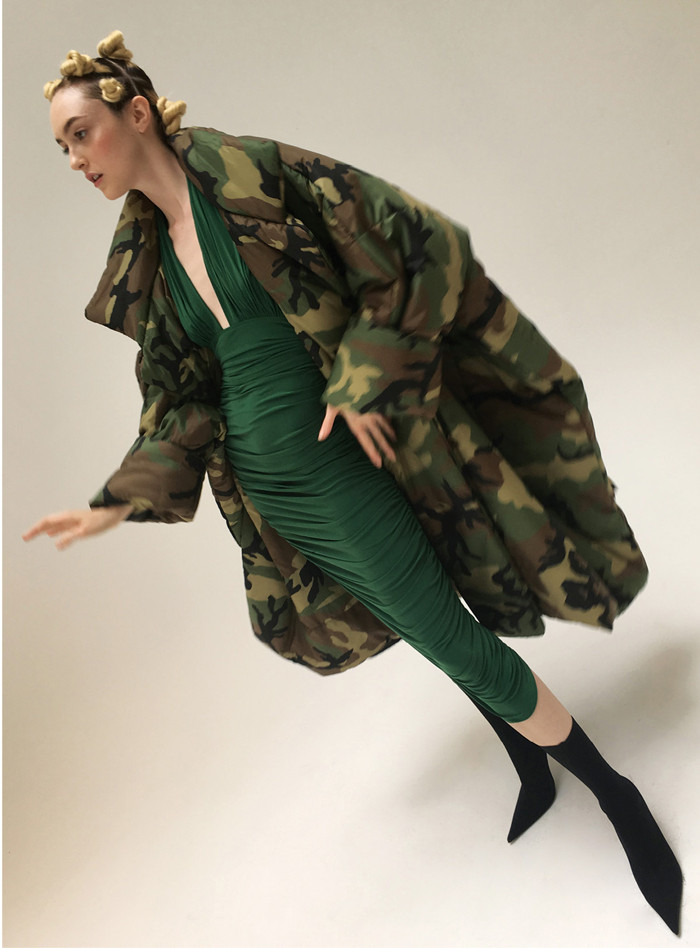 Your flagship store in New York opened in 1982—a lot has changed in retail since then. How are you imagining the future of shopping?

I think it’s inevitable that the luxury of having a selection you can look at from around the world while you’re in the car or in bed is unbeatable. The service is much better than any service you can find in a retail store. But having said that, I do believe there is a time when we have to come together [in-person]. Coming together, especially for women, is supportive and empowering. It’s what we need for the soul. 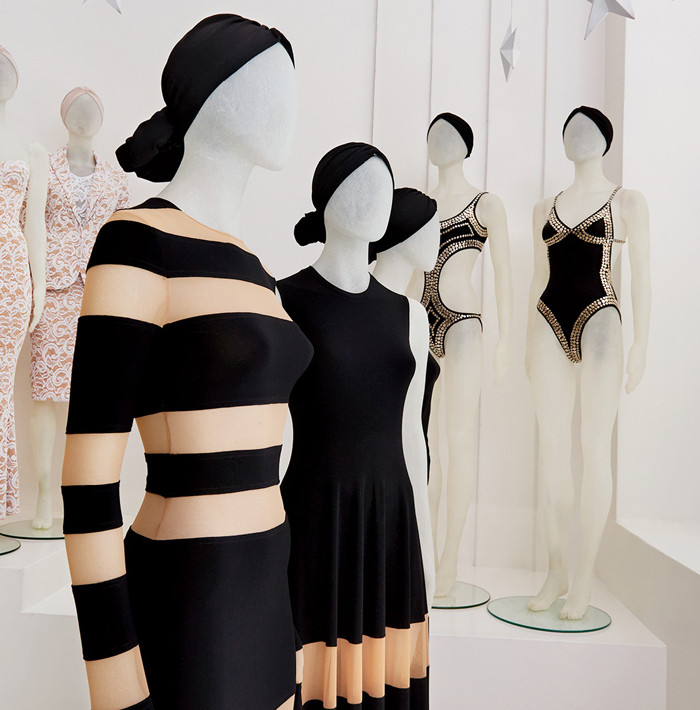 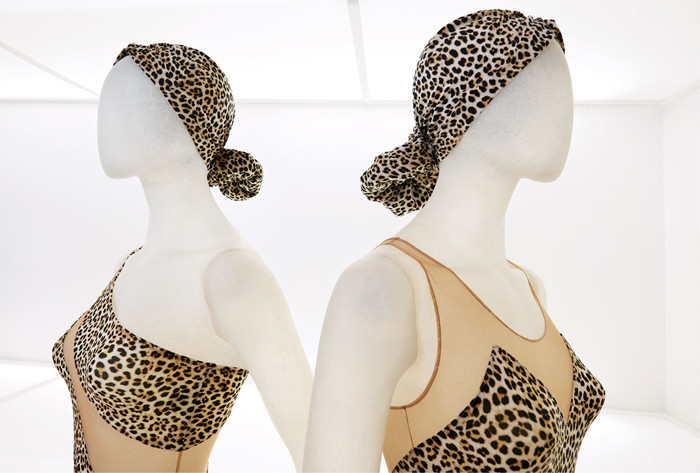 How do you relax?

I think we are all so overstimulated in every way, especially with our phones. It’s put us on this treadmill, like a little mouse running in a circle, and we are all going faster and faster and not getting anywhere. I’m still running on this treadmill. And we’re all feeling that way. I think it is critical that there is a meditation of sorts and for some people it’s prayer, for some people it’s taking quiet time. I will go into the bathroom, turn off the light, sit on the closed toilet lid, and breathe. Thanks to the ’70s Transcendental Meditation movement, I can get into it in a nanosecond. I also think acupuncture is super helpful. For me, it’s such a great reboot. Massages, too. Even if it’s just going to the nail salon and getting a neck massage for 15 minutes, I say do it. It’s money well-spent. 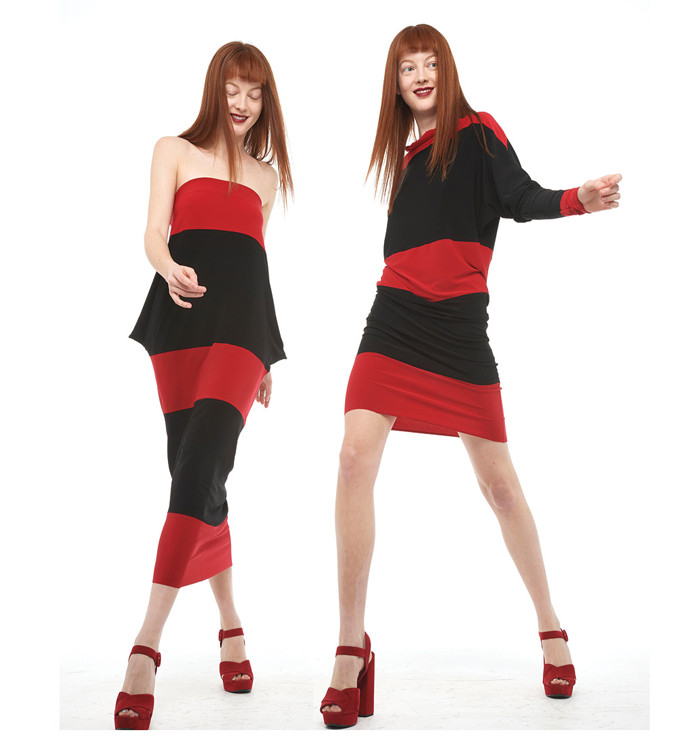 The All In One Dress, originally designed in 1973, can be styled 12 different ways

Issa Rae Is The Newest CoverGirl, And We're Freaking Out (And So Is Issa Rae)

How (And Why) To Host A Clothes Swap Party

9 Bicycle Accessories To Let You Ride In Style

Tags: Norma Kamali , fashion , style , design , interview , BUST interview , from the magazine
Support Feminist Media!
During these troubling political times, independent feminist media is more vital than ever. If our bold, uncensored reporting on women’s issues is important to you, please consider making a donation of $5, $25, $50, or whatever you can afford, to protect and sustain BUST.com.
Thanks so much—we can’t spell BUST without U.