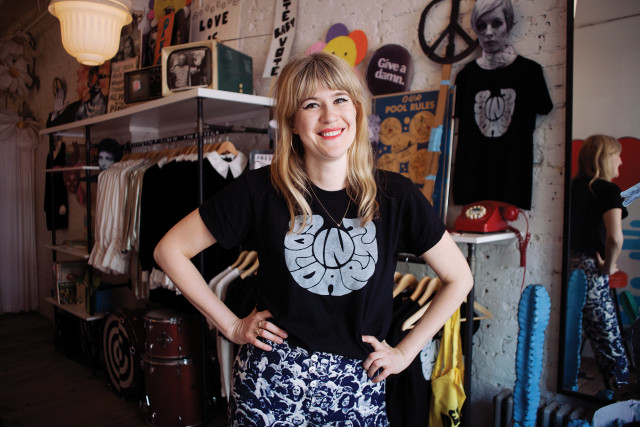 Up in the Club

Buried in the heart of N.Y.C.’s East Village is a gem of a shop called The Deep End Club, dedicated to the political, social, and sartorial ethos of the ’60s—an era close to the heart of British-born owner and designer Tennessee Thomas. The 31-year-old, an original member of the now-defunct alt-rock band the Like, has been collecting ’60s memorabilia for years, and plays ’60s soul and girl group music when she DJs around town. But it’s the activism of the decade she perhaps finds most inspiring. “When I moved to New York, the Occupy movement started, and it was like I was living through the actual ’60s,” says Thomas, who helped host teach-ins and used music to raise awareness about the issues being protested. Subsequently, she thought it would be fun to continue the conversation: this time, in a shop. So she snagged a space in the East Village for $500 a month. “Even though I had no products, I just took it and then had to fill in the gaps,” she says.

Thomas did that by reaching out to the neighborhood to see if anyone had anything they wanted to sell—which is why you’ll find friendship bracelets and mushroom earrings made by local teens next to well-curated racks of vintage wares—and in the meantime, held art shows and pop-ups, building a Deep End Club community. Soon after, Thomas began designing her own T-shirts—the first, and most famous, says “Give a Damn” across the chest—and simple shift dresses, beloved by the likes of Tavi Gevinson and British model Alexa Chung, who became the face of her first collection. Thomas’ newest designs—a pale pink velvet suit and a Bernie-inspired T-shirt that reads “In Solidarity”—are part of her “election collection,” which she named as a joke but that truly evokes the shop’s political fervor. (During the primaries, The Deep End Club was a Sanders headquarters of sorts, and Thomas’ new band NAF (Nice As Fuck), with Rilo Kiley’s Jenny Lewis and Au Revoir Simone’s Erika Forster, played at Sanders’ rallies.) “I’m a huge fan of Vivienne Westwood and how she started a shop and tied music, politics, and fashion together,” Thomas says, about the iconic U.K. boutique, Sex. Clearly, Thomas is following in her footsteps.

Jenny Lewis Will Take You On A Musical Voyage

Tags: Tennessee Thomas , Fashion , Activism & style
Support Feminist Media!
During these troubling political times, independent feminist media is more vital than ever. If our bold, uncensored reporting on women’s issues is important to you, please consider making a donation of $5, $25, $50, or whatever you can afford, to protect and sustain BUST.com.
Thanks so much—we can’t spell BUST without U.