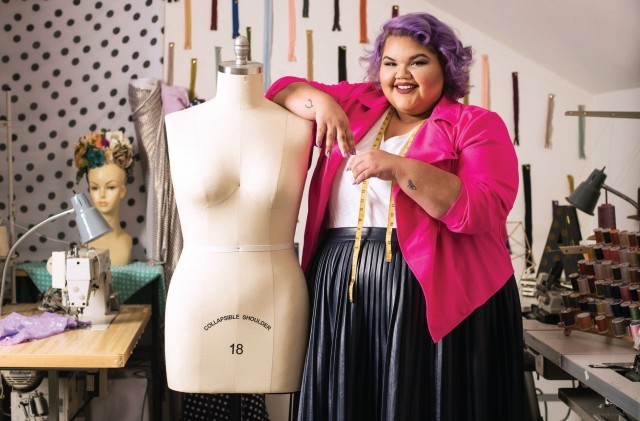 “Are you sure?” That was Ashley Nell Tipton’s first reaction to hearing Heidi Klum announce her as the winner of the 14th season of Project Runway last November. “I was standing up there on stage and my whole body is locked and I can just feel my heart pounding,” she says over the phone from her home base in San Diego. “I feel like you could almost see it pounding out of my chest.”

Like most high-achievers, the 24-year-old graduate of SD’s Fashion Careers College didn’t quite grasp her big break. “You kind of have to take a step back and be like, ‘You just won Ashley.’ I had to constantly remind myself for weeks after that,” she says. There’s a reason Tipton caused such a stir when she won reality TV’s most influential contest, and it’s not only because she’s the first plus-size clothing designer to claim the coveted prize. It’s also because Tipton is really freaking talented. With her bright colors, body conscious shapes, and revealing crop tops and lace bras, she’s showing the world that whimsy isn’t just for straight sizes.

Tipton’s interest in fashion blossomed while she was  working a high school job at the plus-size store Torrid, and her knack for innovation evolved when she didn’t see her playful sense of style represented in brands that offered options above size 12. “I always wanted the poufy tulle skirts. I wanted to feel like a princess,” she says. All the attention Tipton and her designs have received is a signal that plus-size clothing is in the midst of a revolution. Her frilly-but-not-fussy short shorts, modern uses of lace and crochet, and mix-and-match patterns provide a refreshing alternative to the bland hues and shapeless silhouettes of the plus-size fashion of yore. “I want women to be able to show who they are through their style,” she says. “Being a woman and everything that means; I put that into my clothing.”

Soon we’ll all have a chance to get Tipton’s signature style: Her own line is due out this summer and she’s working on two big time collaborations (though she’s not yet at liberty to say who they’re with). In other words, she’s super busy. “It’s a new journey,” she says, “and it’s everything that I’ve always wanted.”

Who Approved These Fat-Shaming Photos For Plus-Sized Clothing?