The True Price of Fast Fashion 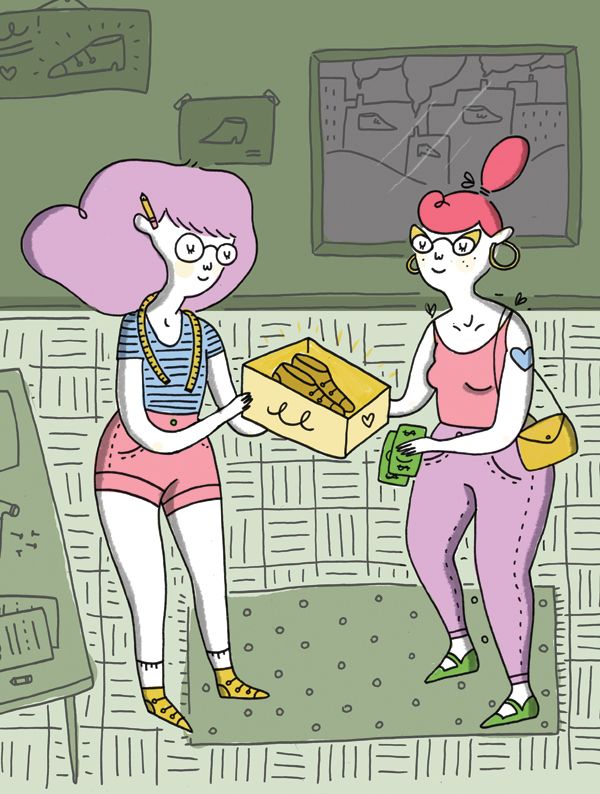 Why does a handmade sweater cost $250, while the knockoff version costs less than a grande latte? The answer is complicated, and after reading this, you may change the way you shop—forever.

Buying clothes is all about choices: the jeans or the printed capris? The green sweater or the pink? And during that process, you’re faced with another, more impactful decision: how much of your hard-earned cash you’re willing to spend. When you’re hunting for a pair of overalls, do you buy the $15 ones at H&M or spend 10 times that much on a handmade pair by a local designer? It’s not an easy choice. Sure, you know all about the exploitation in the fashion industry that goes into making your cheap clothes so cheap, but why is the alternative so expensive? When it comes to the clothing in our closets, what do we actually get when we buy indie?

Professor Elizabeth Moreno, a lecturer on the history of fashion at New York University and Parsons School of Design, says that ultra-cheap clothing has its roots sometime around the middle of last century. “American clothing used to be made in American factories,” she says, “with union regulations and an emphasis on construction.” Look at the inside of a piece of clothing from the ’40s or ’50s, and you’ll probably see a “Union Made in the U.S.A.” tag, along with invisible hems and additional fabric in the seams, which allowed for the customer to have the garment taken in or let out. These pieces were designed to be durable, the kind of items that’d stay in the wearer’s closet for decades. That approach to dressing started to change in the 1960s, when mod designers like Mary Quant introduced disposable garments, literally: she designed paper dresses that could be thrown away after a single wear. “Cheap, simply constructed fashion became a badge of honor that was a signal of youth rebellion,” says Moreno. “[Young people] rejected the buttoned-up appearance of their parents’ generation in favor of their own aesthetic. Cheap clothing became a hallmark of counterculture.” Here-today, gone-tomorrow trends became king as U.S. family incomes increased. That was the same decade in which huge discount retailers like Target and Walmart started to spread across the country, catering to the burgeoning middle class. And in the 1970s, massive textile mills started opening across the developing world, offering retailers the chance to abandon their U.S. operations and save millions of dollars.

These days, seeing “Made in the U.S.A.” on a piece of clothing is rarer than catching a cab in a thunderstorm; as of 2011, only 1 percent of footwear and 2 percent of apparel is made inside the U.S., down from about 50 percent in 1990. But while overseas factories are superefficient, they’ve also introduced some undeniably unsavory business practices. Workers in Bangladesh, where 80 percent of the country’s exports are apparel, currently earn the lowest minimum wage in the world, taking home about $43 a month. Chinese factory workers make slightly more: $117 to $147 a month. In contrast, American garment workers earn about $9 an hour, taking home $1,660 a month. (This salary, compared with wages in other countries, seems almost extravagant, yet it still hovers at the American poverty line.)

In countries with lax labor standards, factories often sacrifice worker safety in order to maximize turnaround. Sometimes, employees aren’t paid until they meet a ridiculously high quota of pieces they must finish daily. This means 14-hour days without access to water, basic bathroom facilities, or any breaks. And although the November 2012 fire in a Bangladesh factory—in which 112 employees died because the exit doors on their floor were locked—made international news, stories like that aren’t uncommon. From 1990 to 2012, there were at least 33 major fire incidents at garment facilities in Bangladesh, which claimed 500 lives in total. It’s not just adults toiling away in overseas sweatshops, either: it’s estimated that 55 million children (ages 5 to 14) in India alone are working full-time, some having been sold into labor slavery.

Still, there are signs that the dominance of sweatshop-made fashion is reversing. Over the past decade or so, there has been an increase in the availability of indie clothing lines and fair-trade labor practices, as well as a passion for DIY everything and by-hand production. Project Runway, a high-profile celebration of indie fashion, is in its 12th season, and three million Singer sewing machines were sold in 2012—double the number sold a decade earlier. All across the country, dressmakers, purse designers, and shoe labels are hand-creating goods and opening online stores in which to sell their creative, quirky wares. But while these indie items offer uniqueness and style in spades, they usually cost a whole lot more than their mass-produced doppelgängers.

So what goes into the construction of one of these “slow clothing” pieces that justifies its high price? In short, considerable time and attention. Look at the work of an Etsy success story like Yokoo Gibraan, who sells complex hand-knit scarves and hats, some of which cost as much as $200. While that price tag may make you wince, it buys a 10-foot long, handmade piece of fiber art and pays Gibraan fairly for the hours she put in. And as any knitter will tell you, even the simplest projects may take countless hours to complete. Brooklyn-based Tennille McMillan is another designer who hand-makes her wearables—she has been selling vibrant leggings, dresses, and swimwear since 2009 under the name Nakimuli. McMillan finishes each of her pieces with techniques that assure a long-lasting garment: smaller and stronger lines of stitching, nonrolling elastics, and perfectly straight seams. After designing a piece and sourcing her fabric, it takes McMillan at least an hour to construct each dress. “I feel like in America, we’ve lost the concept of what quality clothing is,” she says. “Everything is so fast and so quick that people don’t know quality when they see it anymore.”

McMillan acknowledges that better-made products often cost more, but she’s not willing to skimp on materials. “Stores price the fabrics according to the quality,” she says, “so the fact that we go to places that are a little bit more expensive is cool, because I know I’m going to get the kind of fabric that I want.” Quality fabrics are superior to cheap ones in the consistency of their weave and knit, and even their dyeing; they are also inspected more carefully for irregularities. McMillan’s fabrics, which include printed stretch spandex and thick neoprene, start at $15 a yard; basic jersey knit, by comparison, runs about $4 a yard. On higher-end fabrics, an original design she sends to a digital printer can run upwards of $90 a yard. Since a pair of leggings uses a yard and a half of fabric and a dress can use two to four yards, these expenses start to add up quickly—she prices most of her skirts at $65 and dresses at around $150. Plus, McMillan can’t order fabric in mass quantities, like the big manufacturers do, and reap the benefits of bulk pricing, which can knock the price down by 80 percent or more.

Weirdly, although large retailers end up paying less for fabric, they still may not make much of a profit on each individual item. In the retail industry, the standard markup on an item is double the wholesale cost. So if a retailer pays $5 for a piece made in a Bangladesh factory, it’ll sell the item for $10. But an international chain like H&M may slash prices even further, knowing that while such low pricing cuts into its bottom line, it also makes it easier to sell more pieces. Therefore, it doesn’t matter if the company makes less profit on each item, because it’s selling at such a high volume. An H&M shirt might be priced only four percent more than the cost of manufacturing, but that four percent could mean a profit of millions of dollars, when you consider how many pieces are sold each year. But if an indie designer adopted that sort of pricing model, she’d go out of business pretty much instantly.

Oftentimes, the choice between a higher-priced ethically made piece and a factory-made garment comes down to principles or the size of your wallet. Brooklyn-based designer Magdalena Fox knows her customers ultimately need to make that decision. She’s been selling colorfully printed booty shorts through her one-woman operation, Booty and the Geek, since March 2013. After she sources her fabrics and designs her pieces, she makes each item by hand, a process that takes about an hour to complete, from tracing to cutting fabric to sewing and finishing. “My customers know that they’re supporting a small business, and they’re supporting a woman,” says Fox. “I think that means a lot to them. Now people are more willing to say, ‘I’m getting something that’s made by one person, by hand, and it’s going to be a quality item. So I’m gonna spend $30 or $40 instead of going to Forever 21 and getting something not as nice—but that can pass—for half the price.” In fact, a similar pair of spandex shorts costs around $10 at Forever 21; McMillan says customers have asked why, essentially, they should pay more for her pieces. “I love H&M, and I love Zara,” she says, “but people see their stuff and they’re like, ‘Why are yours so much more expensive?’ But [those retailers] have people in Bangladesh dying in factories, and they’re paying them nothing. It’s a totally different ball game. People don’t think about that, though—they’re just like, ‘If it’s not $2, I don’t want it.’”

So should we spend our dollars only at small businesses and avoid the cheap, often-exploitative brands altogether? It’s a nice sentiment, but it’s still idealistic and financially inaccessible for most. Elizabeth L. Cline, in her 2012 book, Overdressed: The Shockingly High Cost of Cheap Fashion, proposes some solutions to worker exploitation and overconsumption, such as teaching proper mending and laundering techniques, sewing one’s own clothing, buying vintage, and shopping at local stores. Cline also suggests “shopping less and with more intention.” In 2013, the average American bought 70 pieces of clothing a year—more than one piece a week. But instead of buying four cheap tops each month, we could spend that cash on one well-made shirt by an indie designer. It’d require a shift in the way we think about our wardrobes, but it’s not an impossible goal.

Cheap clothing comes with the baggage of cheap construction and, often, questionable morals. While paying more for ethically produced wearables means a hit to your wallet, you also get higher-quality, long-lasting stuff produced in better working conditions. It may not be easy to implement all the time, but it’s something to remember when you’re pulling out your credit card. Of course, buying a $7 T-shirt shouldn’t send you into a guilt spiral; if that’s all you can afford, it’s hard to argue otherwise. But if everyone cut back on the dollars we spend on sweatshop-made fast fashion, it could make a huge impact. Opting for that hand-sewn dress on Etsy instead of a knockoff from one of the big chains? That one decision won’t change the world, but it’s a step in the right direction.

This article originally appeared in the April/May 2014 issue of BUST.  Subscribe!