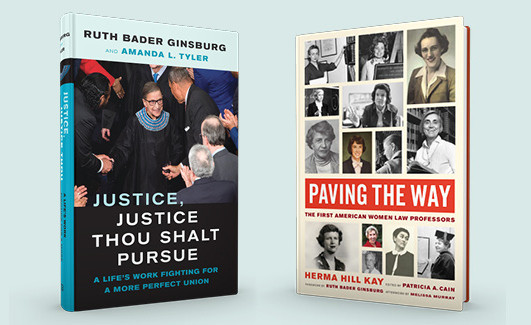 In a decades-long career, Ruth Bader Ginsburg was an advocate and jurist for gender equality and for ensuring that the United States Constitution leaves no person behind. As revealed in her final book, Justice, Justice Thou Shalt Pursue, in the area of gender rights, Ginsburg dismantled long-entrenched systems of discrimination based on outdated stereotypes by showing how such laws hold back both genders.

In Justice, Justice Thou Shalt Pursue, co-authored by Amanda L. Tyler, a Berkeley Law professor and former Ginsburg law clerk, Ginsburg shares details from her family life and long career. These include notable briefs and oral arguments, some of Ginsburg's last speeches, and her favorite opinions that she wrote as a Supreme Court Justice (many in dissent), along with the statements that she read from the bench in those important cases. Each document was chosen by Ginsburg and Tyler to tell the story of the litigation strategy and optimistic vision that were at the heart of Ginsburg's unwavering commitment to the achievement of "a more perfect Union."

When it comes to breaking down barriers for women in the workplace, Ginsburg’s name speaks volumes for itself—but, as she clarifies in the foreword to the long-awaited book, Paving the Way, there are too many trailblazing names we do not know. Herma Hill Kay, former Dean of UC Berkeley School of Law and Ginsburg’s closest professional colleague, wrote Paving the Way to tell the stories of the first fourteen female law professors at ABA- and AALS-accredited law schools in the United States. This is not just a collection of individual stories of remarkable women but also a well-crafted interweaving of law and society during a historical period when women’s voices were often not heard and sometimes actively muted. This is a decidedly feminist project, one that Justice Ruth Bader Ginsburg advocated for tirelessly and admired publicly in the years before her death.

The passing of Justice Ruth Bader Ginsburg in September 2020 as both books were nearing production was met with a public outpouring of grief. With her death, the country lost a hero and national treasure whose incredible life and legacy made the United States a more just society and one in which “We the People,” for whom the Constitution is written, includes everyone.