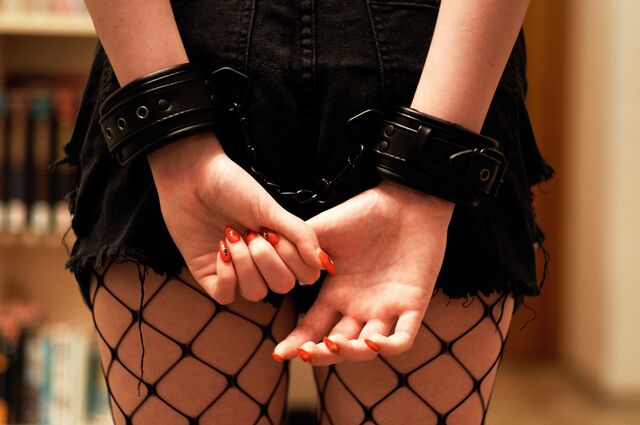 The hashtag #KinkTok currently has more than 3.5 billion views on TikTok. Some #KinkToks are harmless reflections of a sex-positive world in which individuals are free to share their unorthodox sexual desires without shame: Dudes dressed up as French maids! Harry Styles licking his lips! A girl listening to “WAP” while eating a breakfast sandwich for some reason! But many others are more sinister in nature, entering a violent territory that may be dangerous for young people coming to terms with their sexuality. The result, i-D reports, is that “the line between sex positivity and sexual violence is being blurred.”

In one viral TikTok clip that now appears to have been taken down, a teenage girl displays black-and-blue bruises all over her body. “Decided to watch 365 Days with my ‘guy friend,'” reads the caption, a reference to the controversial 2020 Netflix movie that creepily glamorizes Stockholm syndrome, sex trafficking, and sexual assault. In response to the clip, one Twitter user wrote: “This has 5.4 million likes. I am really concerned that young women are seeing this and thinking it’s normal for men to basically beat them up during sex.”

This has 5.4 million likes. I am really concerned that young women are seeing this and thinking it’s normal for men to basically beat them up during sex. Any guy who is comfortable doing this much damage has a screw loose in my opinion... pic.twitter.com/NoWpZQN6GL

If young people see aggressive sex as a norm, or even a necessity, they will be less likely to ask for consent for bedroom violence and more likely to violate sexual boundaries. “Young people are being told that everyone is doing this… It’s a default expectation now,” said Fiona Mackenzie, founder of the UK activist group We Can’t Consent to This, in an interview with i-D. “People’s negative experiences are being diminished because people dismiss them as simply having vanilla preferences.”

As kink-shaming fades away, a troubling and equally closed-minded new trend, “vanilla-shaming,” comes into focus. Many of the TikTok users who brag about sadomasochism also bash people who are not into it, portraying sex negativity as sex positivity. “Share this if you’re into [knife] play, I’m trying to prove something to the vanillas,” wrote one user, who barely looks 16, over a lip-syncing clip that has 79,000 ‘likes’ and counting. Other TikTok users recognize the problem: one user criticized the fact that such clips “have turned vanilla into an insult and hypersexualized underaged girls to the point that they feel it’s compulsory to enjoy men beating the shit out of them in bed [in order] to not be viewed as a prude and be found desirable.”

we are literally back in 2014 tumblr #ThisCouldBeUs #fyp

The pressure young people face to accept sexual violence as essential for pleasing their partner or themselves is not just short-sighted—it can be dangerous, and even fatal. Attention was drawn to this issue in the UK in 2019, when British backpacker Grace Millane was strangled to death by a Tinder date. Millane’s killer tried to use the UK’s “rough sex” or “Fifty Shades of Grey” defense to dismiss her death as accidental, even though he strangled her for 10 minutes straight. The use of this victim-blaming defense has risen by 90 percent since 2010, per The Guardian.

If an act would be considered assault if done nonconsensually in public—such as slapping, hair-pulling, or choking—it’s safe to assume it would be assault if done nonconsensually in private. According to a 2019 BBC study, 38 percent of women in the United Kingdom between the ages of 18 and 39 had experienced unwanted “slapping, choking, gagging or spitting during consensual sex.” The Centre for Women’s Justice attributed this to the “widespread availability, normalization and use of extreme pornography.”

So what is TikTok doing to control its role in the normalization and glorification of sexual violence? “Our Community Guidelines make clear what is not acceptable on our platform, and that includes content which depicts, solicits, promotes, normalizes or glorifies non-consensual sexual acts or sexual violence,” a TikTok spokesperson said in a statement to i-D. “Of the videos that have been brought to our attention, seven have been removed for violating our guidelines.” (Seven!)

While the conversations around sexuality are becoming increasingly progressive, some members of the next generation are learning to equate sexual liberation with kinkiness, and convention with repression. No matter where young people get their sex education from, it needs to teach them that sexual liberation is the freedom to choose and vocalize what they don't want during sex, just as much as what they do.

The Feminist Guide To Sex Education You Didn't Get In School