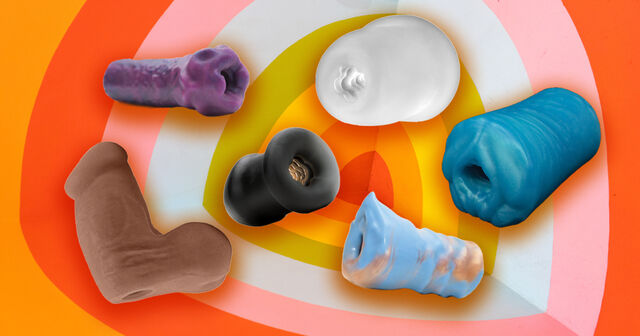 IN MY YEARS of shopping for sex toys, I’ve seen loads of strokers meant to aid cisgender men in jerking off. Recently, however, I’ve discovered that these types of toys—which users can penetrate during masturbation, and which can simulate the feeling of getting a blow job—exist for FTM/ transmasculine people like me as well, and can accommodate genitals in various stages of medical gender transition. And that’s important, because while taking testosterone will likely increase the size of a person’s clitoris, the extent can vary significantly between people. There are also strokers for folks who haven’t taken hormones. For this reason, the exact fit of a stroker is crucial, and vague product descriptions like “for people who’ve had significant [clitoral] growth” can be unhelpful. So if you’re curious but not sure where to begin, here are a few options to consider. With a little trial and error—and this handy size guide—you’ll likely find the perfect toy for you.

I tried The Kiss-X ($25, buckangel.com) first, and even with the recommended maneuvering, I couldn’t quite get the fit right. The opening on this fits the end of a standard pen.

New York Toy Collective’s Jack 2-in-1 Stroker ($59, newyorktoycollective.com) is a penis-shaped stroker that doubles as a packer (a phallic object designed to fit into men’s clothing and add the appearance of a bulge). Despite being listed as having the same-size opening as the Kiss-X, I enjoyed this one, though it was still a little tight.

Next, I ordered the Nixa ($41, etsy.com/fantasticocks). The difference in size between this and the Travus (about 0.05″) looked insignificant on paper, but this one ended up being my favorite, as its size allowed for a good amount of suction and friction. It also has an open end so you can insert a vibe, but it’s thinner than the Travus, so it’s easier to squeeze shut.

The details for the Mer ($30, allfornaughty.com) were great, but despite its given measurements suggesting its opening was bigger than the others, I couldn’t fit into this one. However, the ridges feel like it would be lots of fun to use if it actually fit.

Finally, I tried the Buck-Off ($23, buckangel.com). Even though the product description said it was the same size as the Mer, this one was the largest by far. The opening was about the size of a standard lube cap and I was able to kind of get a little suction briefly. But between its size and softness, I was mostly just squeezing the sides against my junk. –Revé Douglas