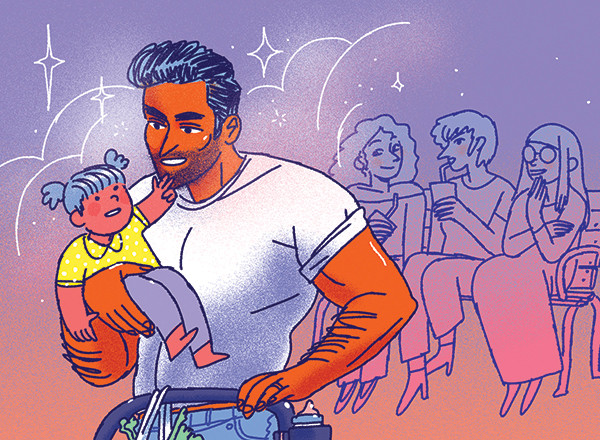 What’s the Deal With DILFs?

AS A SEXOLOGIST, my academic interest in DILFs was piqued in the mid-2000s when my husband and I rotated pick-up duties for after-school childcare. We both noticed that many of the employees there—all women in their early 20s—were crushing on the dads picking up their kids. Although they were of varying ages, sizes, and degrees of wit and hotness, these guys all received considerable admiration from the female staff. Such was my first introduction to the DILF: the Dad I’d Like to Fuck.

Yet scientific inquiry on the DILF phenomenon is virtually nonexistent. Why would younger women find older men with children so appealing? What does it mean to be down with daddies?

That’s where I and my research assistants at the Observations and Research in Gender and Sexuality Matters Research Lab (at Kwantlen Polytechnic University in Vancouver)—aka O.R.G.A.S.M.—stepped in. For our DILF study, we randomly assigned 671 straight women to one of two groups—the DILF and the non-DILF group. All of our participants identified as heterosexual, and most participants were Caucasian, almost 30 years of age, in non-married committed relationships, with some undergraduate education.

Both groups were shown the same image of an older, attractive man we called “Jason.” All women were told that he was a 45-year-old man with a job. But one group was also told that Jason had two children (the DILF condition). No such description was provided for the second group (the non-DILF condition). Participants were then asked to rate Jason’s perceived attributes on a scale of 0 (not at all) to 3 (very), including questions about his attractiveness, his emotional skill (warmth, generosity), social skill (he likes to travel and to entertain), and his masculinity (ruggedness, dominance). We also asked about the quality of their relationship with their own paternal figure, and their interest in both a short-term sexual and long-term romantic relationship with Jason.

We found that women rated DILF Jason higher on measurements of his emotional skills—such as whether he was capable of a meaningful long-term relationship, empathetic, dependable, selfless, responsible, nurturing, wise, mature, capable, a good planner, and healthy. Our study shows that DILFs are appealing because of their children, not despite them. But we were surprised to find that this was the only difference in how the two groups evaluated Jason. Women rated both DILF and non-DILF Jason equally on attractiveness, masculinity, and desirability for short-term sexual and long-term romantic relationships. We know the DILF phenomenon exists—so what gives?

It’s possible that our results are evidence of what’s called a ceiling effect—meaning that our Jason was too attractive, and was rated so highly by both groups that there wasn’t any room to go higher in the DILF group. It’s as if Jason was a 10, and our scale didn’t go to 11.
It’s clear that more research needs to be done, perhaps using a more average-looking Jason. We’ll be continuing our study of DILFs to discover what makes them such thirst traps. It’s a hard job, but someone has to do it. So, who wants to volunteer?

By Cory L. Pedersen, PH.D.
By Illustrated by Janet Sung

A Sexologist Suggests A Better Lubricant That's Not Saliva

How Do I Give A Blow Job Without Gagging?

RuPaul's Drag Race Recap: DILFs--Dads I'd Like to Frock

Tags: Daddy , Daddies , Zaddy , Zaddies , DILFs , Dad I'd Like To F , sex
Support Feminist Media!
During these troubling political times, independent feminist media is more vital than ever. If our bold, uncensored reporting on women’s issues is important to you, please consider making a donation of $5, $25, $50, or whatever you can afford, to protect and sustain BUST.com.
Thanks so much—we can’t spell BUST without U.