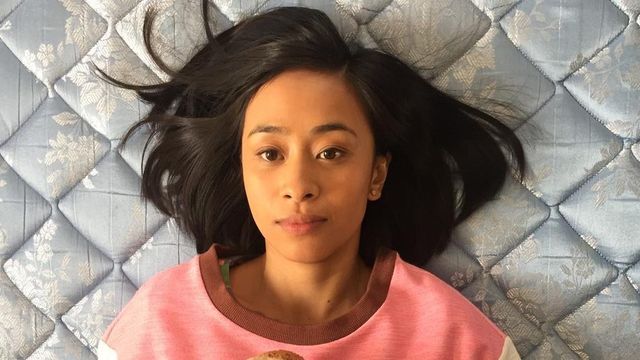 Charlene deGuzman wrote and stars in Unlovable (still image above), now streaming on Amazon, iTunes, and GooglePlay. Unlovable is a dramedy about a sex- and love-addicted woman who learns what real intimacy is when she starts making music with a reclusive man. It co-stars John Hawkes and Melissa Leo, was directed by Suzi Yoonessi, and is a Duplass Brothers production. Here, deGuzman shares a personal essay about her recovery from sex and love addiction.

I was crying, shaking, and laughing all at the same time. All I owned was one dull knife that didn’t cut my skin at all—a comical reminder of how broke I was. I checked the medicine cabinet—all I had were three generic Xanax pills and a couple of Advil; that wouldn’t kill me. I surveyed my tiny studio apartment and there was nothing I could tie a rope to. Did I even have rope? Would a cheap Forever 21 skinny belt work?

I had been pacing my apartment for the past seven hours, panicked and hysterical. I had come to the decision that I was crazy. I was broken, and no one could ever love me. I was unlovable. There was no point in living anymore.

Because he didn’t text me back.

Of course, this wasn’t anything new for me. I had been chasing after unavailable guys since I was a child. My kindergarten crush? Never liked me back. My second grade crush? All over my journal until the fourth grade. My first true love? I was 13 years old, he dumped me after a month, and I started cutting myself, because I wanted to die.

Now I was 31. I had been here before. Many, many, many times before. It was always “true love.” He was always “The One.” The difference this time was that I had been in a 12-step program for sex and love addiction for four months. I had gotten “sober” off my ex.

And then I went back to him. And I had sex with him. And then he didn’t text me back. The pain I felt was the worst pain I had ever felt in my already painful life.

“Where do I even find a bridge?!” I shouted out loud.

As if on cue, my phone rang. It was his name. It was his picture. It was him. I watched the screen, frozen. Like heroin running through my veins, I felt all the pain and anxiety that I had been feeling for those seven hours, dissipate from my body immediately.

"Sex and love addicts are addicted to things that they mistake for love, like dependency, longing, lust, neediness, pity, rescuing, and being saved."

Most of the guys I pursued were emotionally unavailable. This is common for the sex and love addict, because while we have a conscious fear of abandonment, we also have an unconscious fear of intimacy. So, pursuing someone who is aloof, narcissistic, vague, wishy-washy, not interested, already in a relationship, an addict, or a total dick, feels right. (But they’re so charming!) It’s familiar. It’s what we think we deserve. We don’t want to be seen, so we unconsciously choose partners who don’t see us at all. The longing and starving and chasing is all we know. (Which is probably why I’ve had more than a few intense long-distance relationships, too, now that I think about it.)

After almost killing myself and seeing how sick I was, I finally committed to my recovery. I was single, abstinent, and romance-free for a year and a half. No flirting, no texting with potential guys, no looking at exes’ social media, no intriguing with strangers, nothing. Okay, so I definitely slipped a few times on the social media thing. And there was one night where I listened to an old voicemail from my ex 67 times in a row until the sun came up. But I did delete it in group therapy the next day. When the therapist asked why I did that, all I said was, “I liked hearing him say, ‘I love you.’”

Sex and love addiction is different from substance addiction because you don’t just stop using—with love and sex, you eventually need to learn how to experience it healthily. I eventually went on a “healthy dating plan,” which basically meant that I needed to learn how to actually date, go really slow, get to really know someone, and not have sex immediately.

"Sex and love addiction is different from substance addiction because you don’t just stop using—with love and sex, you eventually need to learn how to experience it healthily."

Before this, I never really dated. I just hooked up with guys I barely knew, as soon as I met them. My boyfriends were one-night stands that happened to stick. So the idea of a plan that required me to go on one daytime date a week for the first month, sober, without any physical contact—I wasn’t exactly excited. For my very first date, we met up for coffee for an hour, and when I got home, I cried in the fetal position and shouted, “I will never do that ever again!” The vulnerability physically made me ill.

By the second date, I realized that I wasn’t interested in this guy. I also only made it to two dates with the next guy. I was feeling surprisingly empowered by these experiences. I could just walk away? After only two dates? Knowing very clearly that I didn’t like them? Instead of having drunk sex with them, convincing myself I’m in love, and obsessing over them for another year? This was entirely new territory for me.

I happened to reconnect with an old acquaintance that I had never spoken to much before. But this time, we had so much to talk about, we had so much in common. I liked this person! As a friend! A real friend that I respected! We realized we were both looking for the same thing. We were both recovering from similar issues and trauma, and didn’t want to go back to our old patterns and habits. We both needed to go slow. Really slow.

So we did the dating plan together. We got through month one. Month two, we could kiss and hold hands. (Our first kiss was the most meaningful, powerful kiss I’d ever had in my entire life.) Month three, we had sleepovers, but still, no sex. And after three and a half months, because we waited until we both really felt ready, and were committed to a partnership, we had sex for the first time.

It’s been two and a half years in this relationship now, and for the first time in my life, I’m practicing healthy sex and intimacy. It’s the most fulfilling thing I’ve ever experienced, and I’m the happiest I’ve ever been. But it’s still hard. I think that even in recovery, there was always this idea that getting in a relationship was the answer; it meant that you were okay and everything was fixed. But the truth is, the work only gets harder, the healing only gets deeper. There are never-ending layers to heal, and you and your partner will constantly push each other’s buttons so you can both heal and grow.

But it doesn’t feel like life or death anymore. My emotions are right-sized. And I know how to express my honest feelings now, and have difficult conversations. I know how to look into my partner’s eyes, and stay there. Before this, looking at someone in the eyes literally hurt my chest. I know how to listen now, and not take on my partner’s emotions. I have boundaries now. I can say no. I can speak up. I can face things that are scary.

What’s cool is what I’ve found is that it’s this type of intimacy that heals all the wounds of my past. The thing that I was always the most afraid of, is actually everything I’ve ever wanted and needed.

And hey, my worth and value are no longer dependent on a text.

On "Swipe Culture" And Dating While Fat

This Website Gives You The Sex Ed You Never Had

Whatever Happened To Those Girls Who Signed "Purity Pledges"?

Charlene deGuzman is a writer and actor in Los Angeles. She first garnered attention from tweeting her self-deprecating thoughts as @charstarlene, then went on to write and star in her own short films, like her most viral one, "I Forgot My Phone." Charlene wrote and starred in her first feature film, Unlovable, which premiered at SXSW and won special jury recognition. She is an advocate for self-love and bringing awareness to sex and love addiction. She speaks publicly about her recovery, and has her own advice column. She is also a psychic medium and gives intuitive readings at charlenejoy.com. Follow her work at charstarlene.com and @charstarlene on Twitter and Instagram.