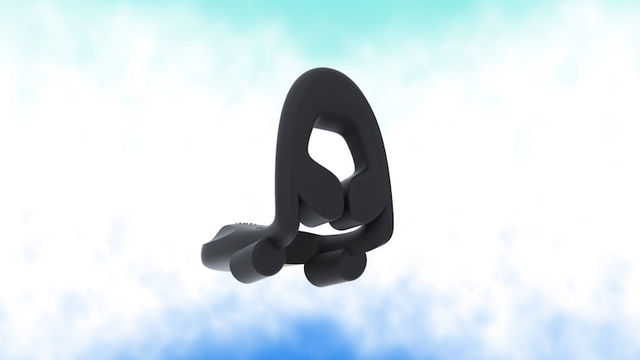 There’s a design revolution going on in cis women’s sex toys. Gone are the days where neon-colored, animal-shaped vibrators, or dildos lifted straight from porn-star dicks, flooded the market. Now, pleasure devices come in all shapes, sizes, and materials: designers are increasingly creating products based on vulvar anatomy, and shying away from phallic imagery. These new toys look like everything from emojis to cupcakes to miniature Pixar robots. While these changes make sex toys more accessible to cis women (and, more broadly, anyone with a vulva), sex toys for cis men (or anyone with a penis, for that matter) aren’t undergoing the same design revolution.

Aside from a handful of couples’ vibrators and prostate massagers, toys for people with penises can be boiled down into four categories: cock rings, vibrating cock rings, and vibrating or non-vibrating friction-based toys. Often, these devices resemble disembodied vulvas or other body parts—including feet. Others are less derogatory to women and resemble hollowed-out foam rollers. So, given the dearth of options, if you have a penis and want a product specifically designed for your junk, you're basically left with sticking it inside of a lubed-up silicone sleeve and rubbing one out while you watch reruns of the Nanny.

It cannot be overlooked that the sex-tech industry calls their customer base for friction-based toys for penises “men,” and that they use women to advertise their products. Even when the design of friction-based toys doesn’t objectify women, many adult websites display these devices using clearly feminized hands. This implies that in the mainstream sex tech industry, toys for penises are marketed for straight cis men. Part of this is in the lag between how language is changing around sex, gender, and identity, and the words that search engines recognize. As Stephanie Alys, the Co-Founder and CPO (Chief Pleasure Officer) of Mystery Vibe, the pleasure brand behind Crescendo, a gender-neutral vibrator, tells BUST, “[Language] is a really tricky thing to work on in terms of digital marketing, that line between discoverability and making sure you are being as inclusive as possible. If you look at SEO and see how people are searching for products [for penises], the top search terms are 'sex toys for men' or 'vibrators for men.’ So, it is about being as inclusive as you can be, but also being discoverable.”

Digital marketing aside, the striking thing about most of the current vibrating toys on the market for penises is that they are designed for goal-oriented, rather than pleasure-oriented, sex. They are marketed as enhancers, meant to cut down on the energy and work it takes to reach ejaculation; the actions leading up to orgasm—the pumps, strokes, and sucks—are a means to an end, secondary to the orgasm itself. Simply put, whether solo or partnered, sex is a race to the finish line where ejaculating is the goal.

Now, you may not think this is important. Men are trash! Who cares about their pleasure? But if men’s toys continue to be goal-oriented, instead of pleasure-oriented, it may pose a problem not only for the people they are sleeping with, but with their general sense of empathy for those around them. If men are only focused on achieving orgasm through whatever means necessary, they might lose sight of the whole sexual process, and may see their partners as objects in their pursuit of cumming, just another means to an end. At worst, this type of goal-oriented sex breeds misogyny and objectification. At best it’s a shitty one-night stand with a dude jackhammering his way to ecstasy.

But Mystery Vibe’s new toy, Tenuto, might just change the way cis men think about sex. Looking like something straight out of Apple's headquarters, Mystery Vibe’s website calls Tenuto a “wearable vibrator for men.” The device can be used in multiple positions with any phallic object (strap-ons, summer vegetables, you name it) and can extend from the base of the shaft, around the scrotum, and out towards the perineum, or can be flipped to sit along the underside of the shaft extending upwards to the head. With six vibrating motors that can be controlled individually to stimulate sexual and erogenous zones alike, Tenuto’s function is to help men explore their pleasure more deeply—alone or with a partner—and ultimately redirect them to focus on the process of building pleasure instead of the goal of ejaculating. In short, it helps make sex a journey instead of a destination.

While Tenuto can be used by anyone, penis- and vagina-havers alike, Mystery Vibe was first prompted to create Tenuto with straight cis men in mind: “There is a whole concept of vibrational toys being for [cis] women,” Alys explains. “[Cis] men take up 50 percent of our customer base, but from the start of Crescendo [our gender neutral product] being on the market, our customer feedback was showing that people wanted more toys designed for [cis] men, or for penises.”

With all this in mind, Mystery Vibe envisions the device and its addendum app as a gateway to redefining sex and encouraging open communication: “[Sex] has a penetrative connotation. We are trying to redefine that and look beyond that narrow definition,” explained Alys. “Our hope with Tenuto is that it will open up more conversations. We want people go home to their partners, and instead of asking them 'What should I do for you?,' ask them, 'how do you want me to make you feel?'”

Better sex, better communication, and better men? I have alllll the feels.