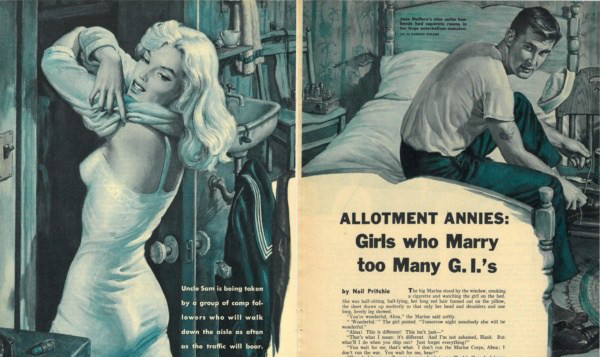 Things were tough in WWII, but some enterprising young women in the U.S. came up with a devious money-making scheme, at the expense of some poor hapless soldiers.

Obviously this allotment was a godsend to wives who had families to feed whilst their husbands were at war. BUT the Army was so busy helping out with the war they didn’t keep too close an eye on who was claiming these benefits…

With such a lax system in place it’d be real easy, if you were a nefarious kinda gal, to marry a couple of soldiers, change your last name, and just keep claiming that sweet, sweet cash.

Making it rain with moral dubiousness!

WOMEN THAT DID THIS BECAME KNOWN AS ALLOTMENT ANNIES.

"Annies" often racked up multiple husbands, and because of the huge death tolls during the war they didn’t have to worry too much about getting caught; since the poor schmuck they married was likely to get killed off before coming home and finding a new hubby in his place.

It goes without saying that Allotment Annies weren’t very popular people. Never mind breaking some soldier’s heart who’s been out fighting a horrendous war and is likely scarred for life – add finding out your Mrs. is a bigamist; thats one mighty kick in the nuts.

The most famous Allotment Annie was Elvira Taylor. Elvira married SIX sailors during her scam and was only foiled when two sailors in an Australian pub showed each other pics of their lovely wife… only to discover it was THE SAME WOMAN!

Fisticuffs occurred, but after beating the crap out of each other, the two men banded together, went to the police and Elvira was duly hauled off to jail. 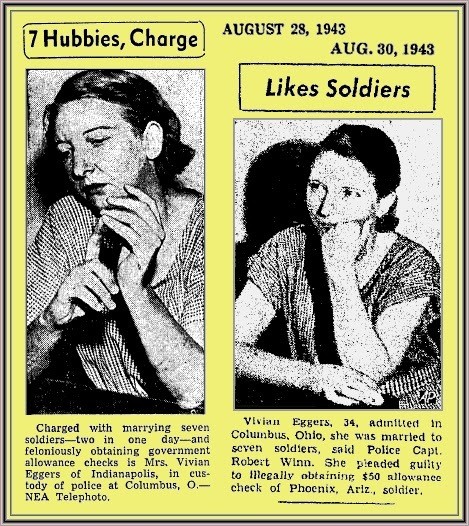 Meanwhile, Vivian Eggers from Indianapolis managed to marry a whopping 7 soldiers, including two in ONE DAY! The logistics of that must have been fun.

Viv ended up being taken to court by all 7 of her husbands; here’s what she had to say of her crimes:

“You just get to drinking and having a good time, and you meet someone that’s kinda nice and that’s the way it happens.”

BTW, that's an actual quote from Viv at her trial for bigamy and fraud. Yeah… the judge was unimpressed and gave her 18 months jail time.

But, a lot of Allotment Annies clapped back, claiming they were working for the war effort by giving the men something to fight and come home for. Grace Vivien Reinert, a 22-year-old Annie, told press that:

“The girls figure that they’re making the boys happy, and that before the war is over the husbands will either be killed or glad to forget about their marriages.”

In case you were wondering, Grace actually married two sailors and was claiming allotments for both of them. She ended up in jail because her husbands met up and realised they were married to the same woman when they noticed their allotment cheques were going to the same address. I guess her theory on the men being OK with it didn’t really work out.

The army soon caught onto the Annies' scams after they estimated that there were thousands of bigamist brides getting rich off the allotment scheme. BUT it was really hard to catch an Allotment Annie in the act; in the entire war only a few were ever actually caught.

So, the Army put together a plan to wise up their troops against wold be Annies. They created a series of adverts warning men to watch out for bigamists.

There was even a major film made about Allotment Annies:1945s film noir Allotment Wives, which stars Hollywood queen, Kay Francis, as the ringleader of a bigamy scheme to get allotment cheques. Spoiler: It doesn’t end well for her. 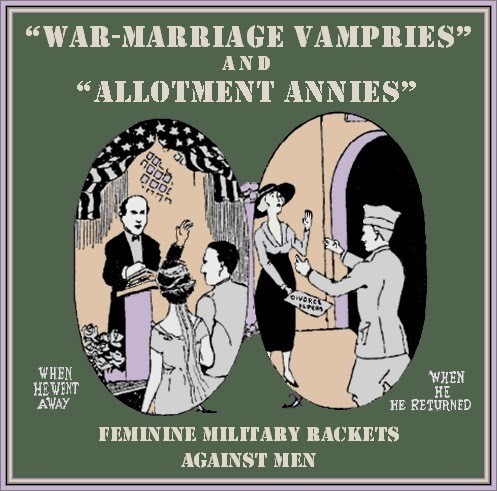 An example of an anti-Allotment Annie ad

After the war, the Allotment Annies were finished… not because they got caught, but because the cash flow dried up when there wasn’t a war to fight overseas.

Who knows how many women scammed the U.S. Army out of thousands of dollars. If it’s as many as the army claims, then it’s kinda hard not to be impressed by that level of ingenuity.

This was interesting, Where can I find out more? Well, I’d totally check out the film Allotment Wives for a lovely slice of over the top propaganda noir. It’s currently available to stream on Amazon, along with several other platforms.

The Story Of Lilian Bader, One Of The First Black Women In The British Army

Tags: Allotment Annies , history , WWII , world war
Support Feminist Media!
During these troubling political times, independent feminist media is more vital than ever. If our bold, uncensored reporting on women’s issues is important to you, please consider making a donation of $5, $25, $50, or whatever you can afford, to protect and sustain BUST.com.
Thanks so much—we can’t spell BUST without U.