From riding greased-up broomsticks to weaving seduction spells, the secret sex lives of witches are the stuff both wet dreams and nightmares are made of

Sex is the X factor in witchcraft. Both serious practitioners and characters in witchy lore are known for their abilities to unleash primal desires. Witches use sexual energy to commune, to manifest, to make magic, and—in the case of the Medieval hags described in the 1486 witch-hunting bible the Malleus Maleficarum—even to steal penises. For millennia, sex magic has been a powerful tool in the hands of gifted conjurers, but it has also been a practice slapped with negative distortions by generations of freaked out male historians. As a result, the labyrinthine history of sex in witchcraft is a heady brew of intrigue, transgression, and repression.

During the early modern witch-hunts in Europe (roughly 1300-1750), female sexuality was viewed as an abomination, but it was also a cultural obsession. Women’s bodies and minds were presumed to be more susceptible to vice, and thus more likely to be overtaken by the charms of Satan. In fact, the familiar image of a witch flying on a broomstick has a surprisingly sexual origin. 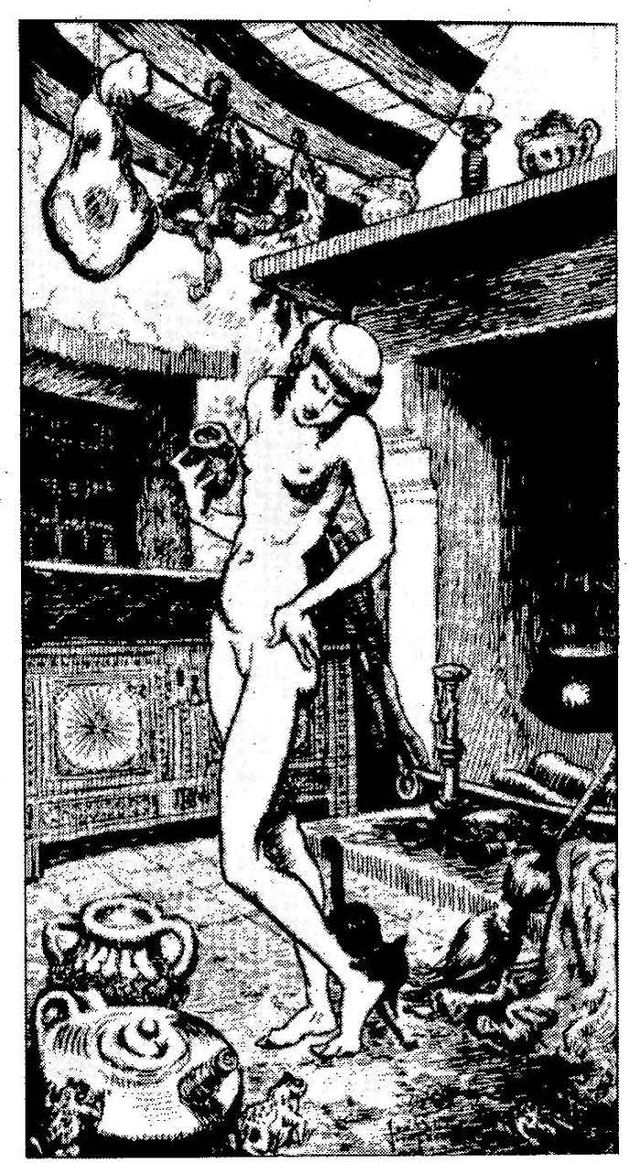 Author Michael Pollan gives perhaps the most detailed description of the alleged sexual connection between witches and their brooms in his book, The Botany of Desire: A Plant’s-Eye View of the World. As he tells it, midwives, herbalists, and ladies in the know (aka witches) would cultivate “psychoactive” agents including datura, opium poppies, belladona, hashish, and even the skin of toads with trace levels of the hallucinogen DMT. “These ingredients would be combined in a hempseed-oil-based ‘flying ointment’ that the witches would then administer vaginally using a special dildo,” he writes. “This was the ‘broomstick’ by which these women were said to travel.” Other sources, including historian William A. Emboden, confirm that this type of hallucinogen would best be absorbed into the body through a mucous membrane like the vagina, further explaining why the traditional image of the witch would depict her astride an ointment-coated broomstick. 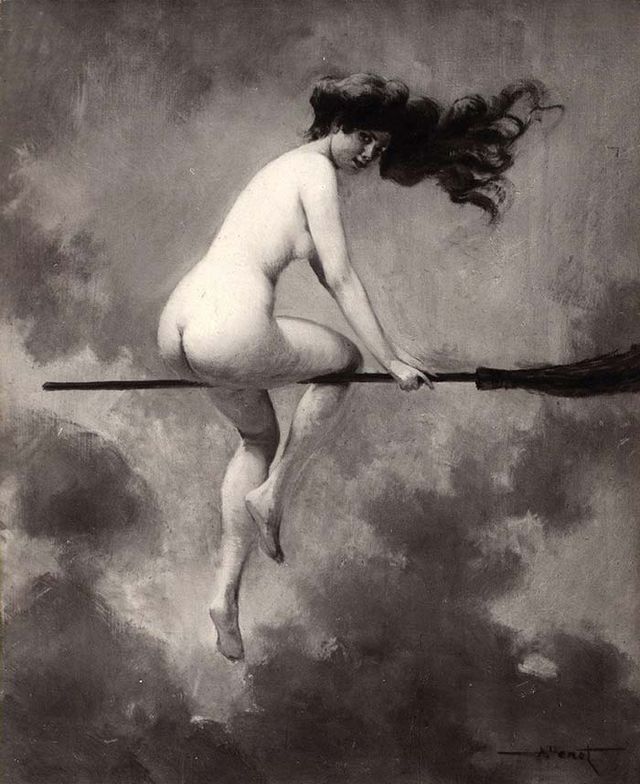 Whether this is an accurate account of an early-modern ritual or merely historical hearsay is unclear. But in extant documents from the 1324 trials of Ireland’s first accused witch, Lady Alice Kyteler, inquisitors describe finding her special stash of “flying ointment.” “In rifleing the closet of the ladie, they found a pipe of oyntment, wherewith she greased a staffe, upon which she ambled and galloped through thick and thin,” they write. Imagine being arrested after the cops found your Hitachi Magic Wand? (This could conceivably still happen in Alabama today, where sex toys remain illegal.) 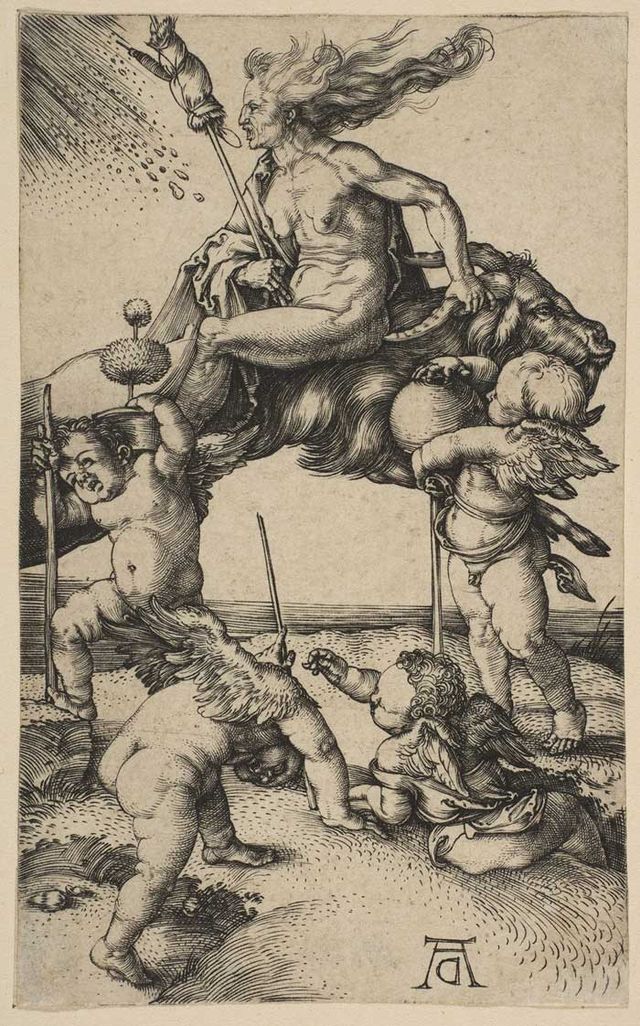 By the time “witches” came to the new world, the idea of deviant femininity unfurled atop a broomstick was ubiquitous. In The Enemy Within: A Short History of Witch-Hunting, John Demos reveals one book found in the American colonies directing the devout to cut a cross into a broom to ensure wanton women would use it to sweep, not straddle. 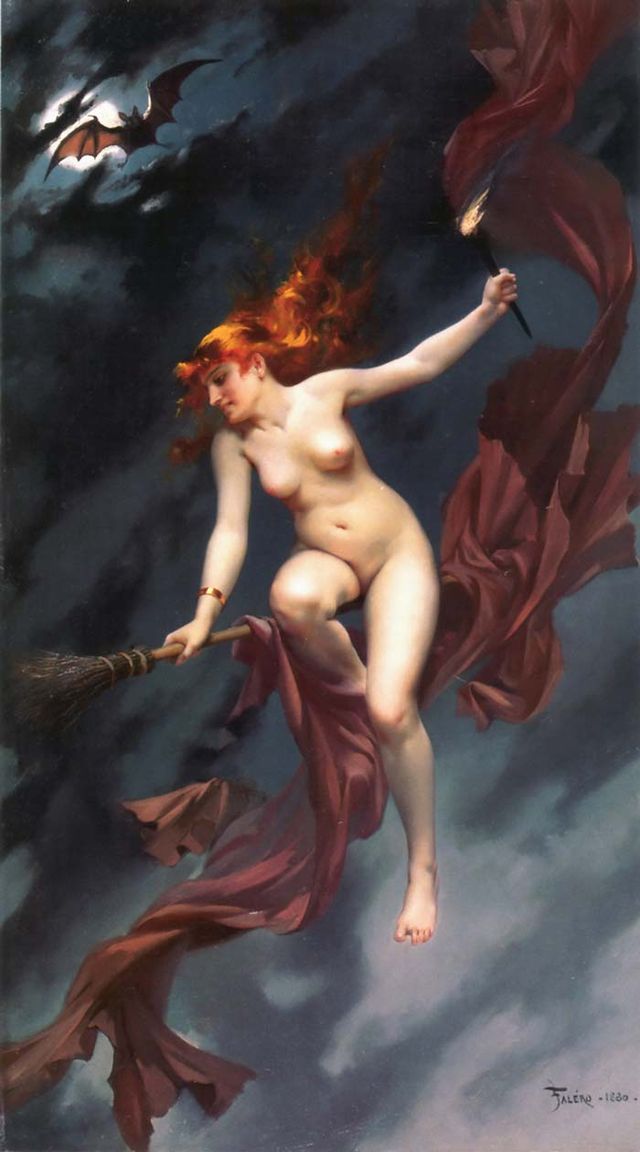 As scandalous as drug experimentation may be, however, the outrage over women finding pleasure separate from procreative sex is a stigma that persists to this day. As ever, many men in power have little use for female sexual agency—unless they are penetrating its warm embrace. We will never know for certain the extent to which the broomstick was a metaphorical or metaphysical device, but modern witches continue to employ flying ointments on their nether regions for magical purposes.

One present-day young witch, E.G. (who wishes to remain anonymous), recently sampled a flying ointment she found on Etsy. The salve was grown and blended by a woman in Spain who says she fertilizes her henbane, mandrake, belladonna, and datura under the full moon with her own menstrual blood. “I had a beautiful experience with it actually,” E.G. told me after trying it. “I was feeling very connected to the energy of the plants, feeling like they were giving me a new lens with which to understand the universe and have this dialogue with the plants, the spirit of the plants, whatever you want to call it.” 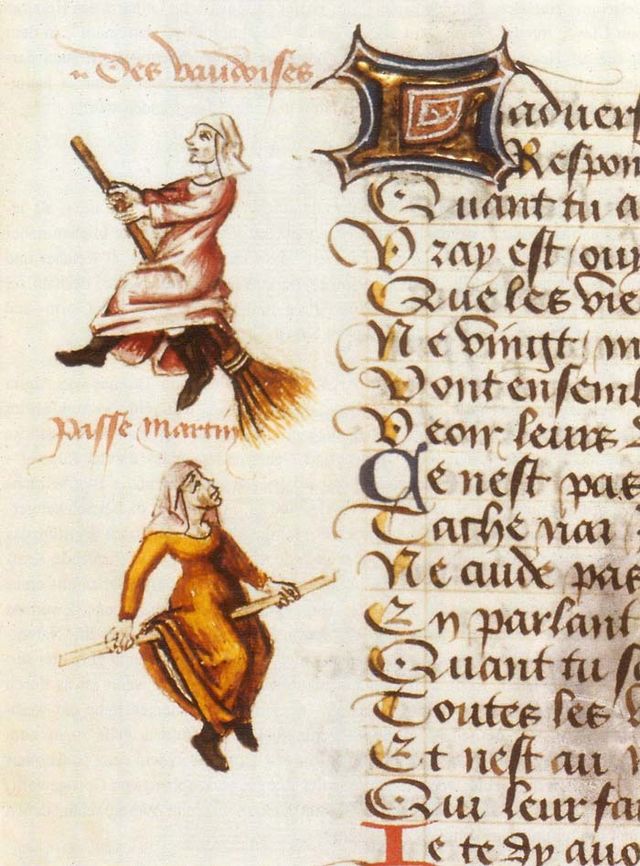 Detail from "Le Champion des Dames" by Martin Le France (1451)
“I was reading about the witch’s ointment and the idea of witches riding broomsticks and how it’s still debated about whether it took place or not,” E.G. continues. “Either it was slander by the church or it was real, and even if it was just slander, it’s still fascinating because we’re scared of women humping broomsticks and getting high. Sex and drugs are so threatening to our society, and in particular women’s sexuality and women having access to altered states. It did feel like a real reclaiming to be rubbing that ointment on my pussy.”

While the history of solo sex magic brings us back to the Medieval witch and her disco stick, partnered sex magic is connected to an even older lineage. Uniting the spiritual and the sexual in ritual was the domain of proto-witches known as “sacred whores.” Such women were priestesses in ancient Mesopotamia, Greece, and India who served as living expressions of the love goddesses over whose temples they presided. Through sexual congress with these women, worshippers hoped to reach higher states of religious connection. 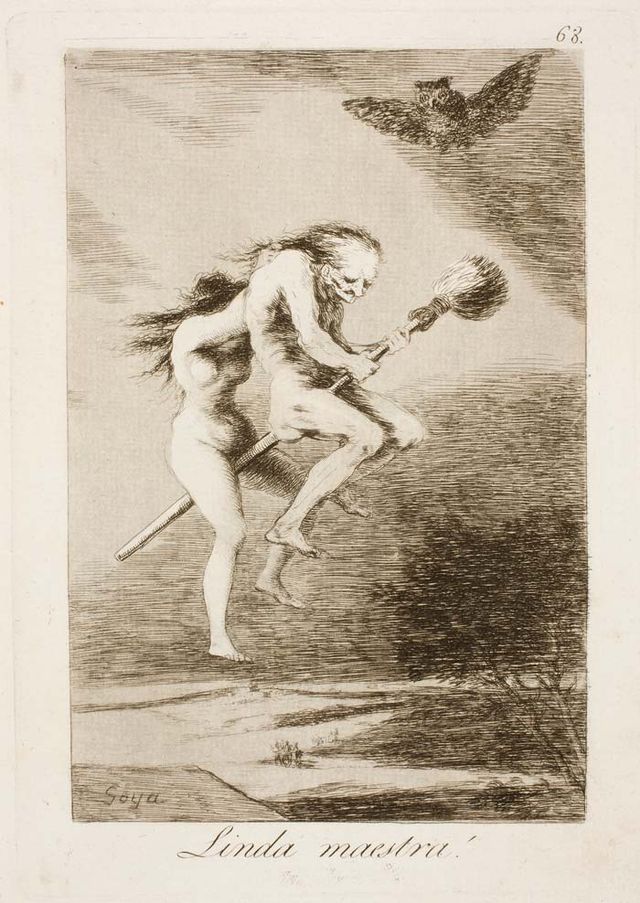 "Beautiful Teacher!" by Francisco de Goya (1799)
Evidence of the sacred whore can be found in The Code of Hammurabi, the Babylonian laws from circa 1754 BC, and in Greek historian Herodotus’ fifth-century BC Histories. Particulars of sacred whores vary, with some accounts depicting them as capable healers and others suggesting they were merely victims of their patriarchs or simply women who exploited sacred sex for profit. By and large, what is written about sacred whoredom reflects the biases of male writers and the times in which they were writing, rather than representing the first-hand experiences of sacred whores themselves. After all, representations of witches always reveal the beliefs of their beholders. Whether they appear as satanic sluts or astute magicians has everything to do with who controls the discourse.

Just as women who defied sex in the ancient world were later persecuted as witches, modern female sex workers are shamed for using their bodies to survive and thrive in a culture that has never granted them complete bodily autonomy. Nevertheless, the legacy of sacred whoredom is palpably alive today amongst many witch-identified sex workers who are harnessing sex magic in their professional practices. Weaving a spell of seduction, like any spell, requires an intimacy with both the physical and metaphysical realms. 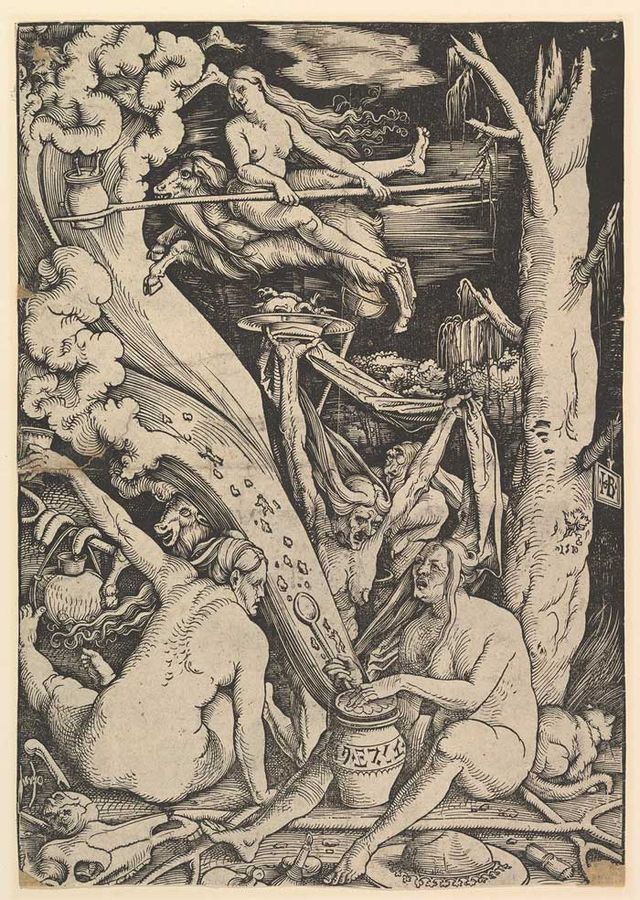 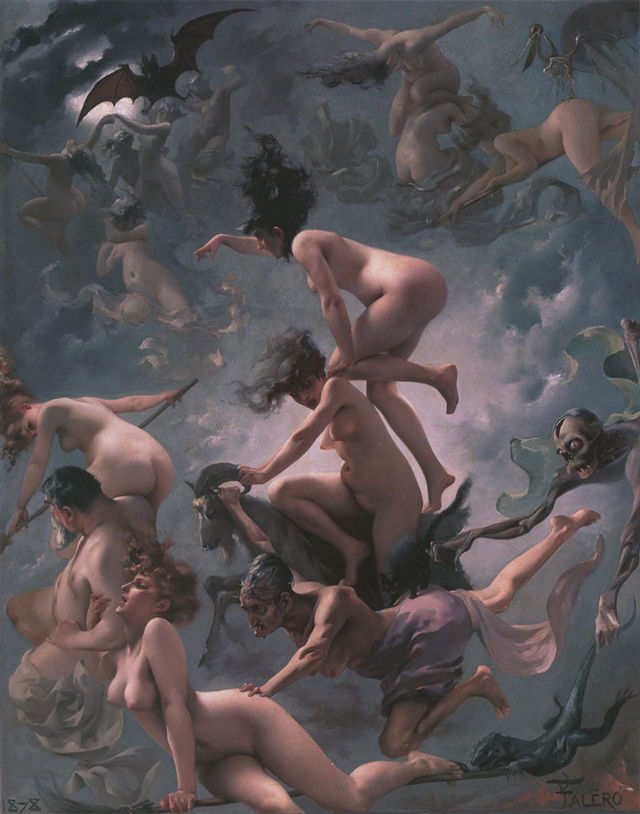 "Witches Going to Their Sabbath" by Luis Ricardo Faléro (1878) 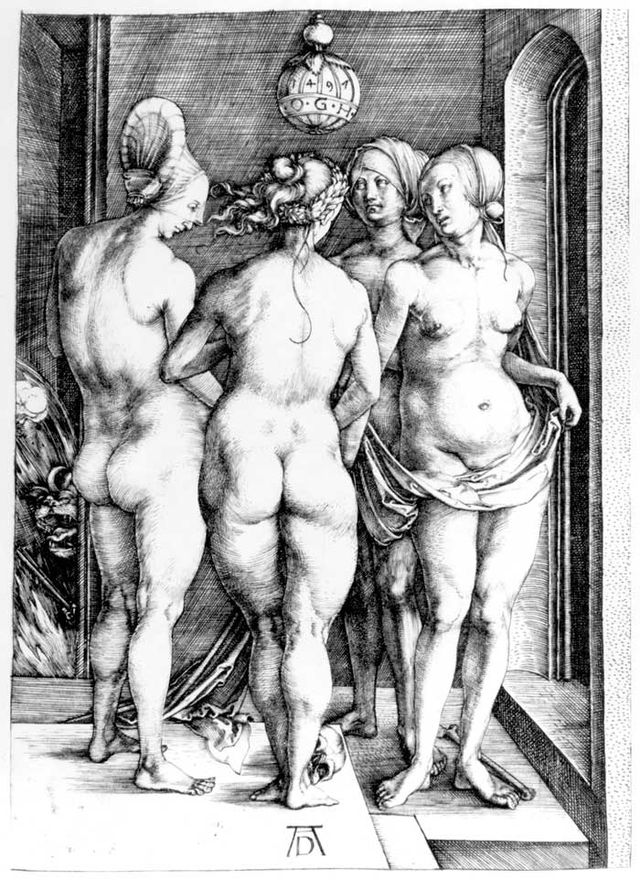 As sexual politics are complex by their very nature, accusations of rituals involving coercive sex or men in power manipulating their positions for pleasure are unfortunately common. For example, in the 1940s, when Gerald Gardner’s fledgling Wiccan movement was taking shape in the United Kingdom, sex in ritual became codified in new ways. Drawing from the aforementioned sex magic practices of ancient times, Gardner and his cohorts created something called the “Great Rite” to symbolize the union between male and female, god and goddess, in a marriage of polarities. This rite—enacted when the coven was in need of powerful spiritual intervention—was performed as intercourse between priest and priestess before existing coven members, and was also an initiation rite between a priest or priestess and a new coven member. Despite this history, the Great Rite continues to be performed by witches today, albeit most commonly as a metaphorical act in which a chalice receives a ceremonial blade.

“I find the literal interpretation of the ritual—sexual intercourse between the high priest and priestess—unnecessary, and for me it would be distracting,” says Wiccan priestess Cat Cabral. “One of the most unique things about being in a coven is the sense of intimacy and trust developed over time, so if even one person felt uncomfortable with something, it shouldn’t be done out of respect for the group. But if you are working with people who are completely open and comfortable—as they were in olden times when practical fertility rituals were more common—it could be experienced as the ultimate unification.” 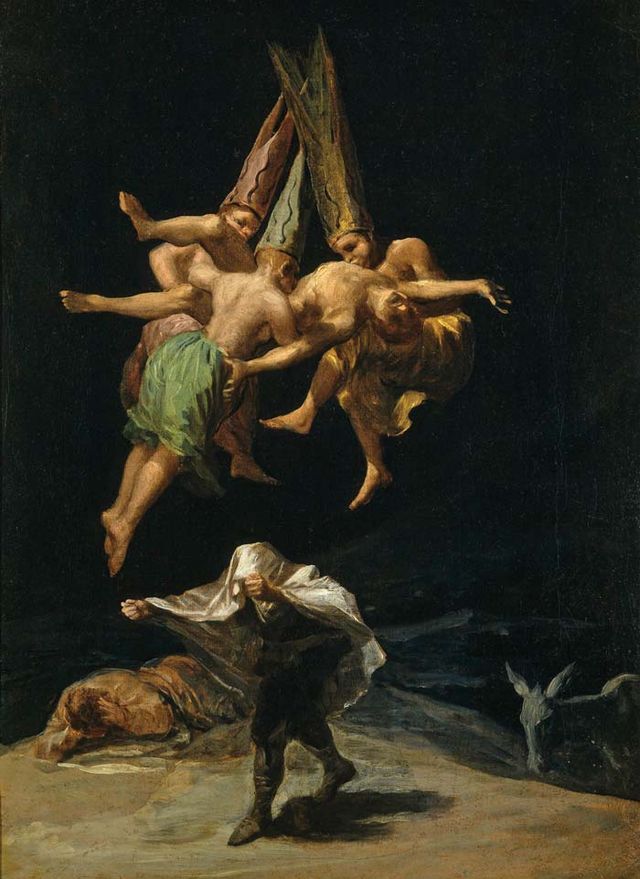 During the sexual revolution and the occult revival of the late 1960s, female sex magic practitioners were able to come out of the broom closet like never before. Louise Huebner, designated the “Official Witch of Los Angeles” in 1968 (by an actual L.A. County official, no less), was notoriously vocal about the importance of sex in witchcraft. At a “happening” held at the Hollywood Bowl attended by thousands, Huebner led a mass ritual to heighten the “romantic and emotional vitality” of the city. A year later, she would release an audio recording of psychedelic spellcraft that to this day has occultists poring over bargain bins to find in vinyl form. 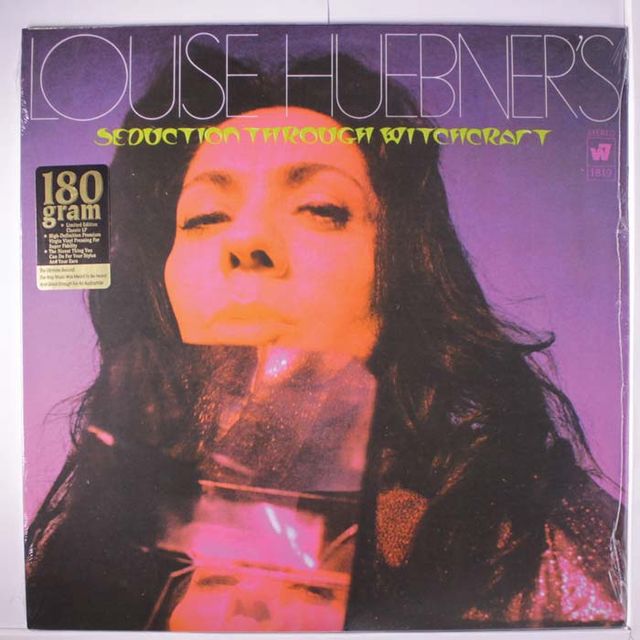 While to the modern ear, the record has a definite camp quality about it, there are serious spells contained within it, with Huebner referencing traditional Egyptian magic, Turkish magic, Sicilian magic, and more, from centuries of sex magic practices around the world.

If you ask most modern witches about working in the sexual realm, they will be sure to include a caveat about due diligence. Many will tell you that actively using sex magic to draw a specific person into your love life can spell trouble. There are plenty of other ways to call in the light of sensual love and connection for yourself, though, and to heighten your own ability to receive pleasure. Performance artist Paige A. Flash suggests getting deep into Kundalini meditation; tarot reader (and BUST columnist) Sonia Ortiz suggests rubbing a sunflower on your vulva to stir your sacral chakra; and healing artist Damali Abrams advises including cinnamon, mango, the herb oatstraw, and jasmine in your kitchen witchery to tap into your sexual power. 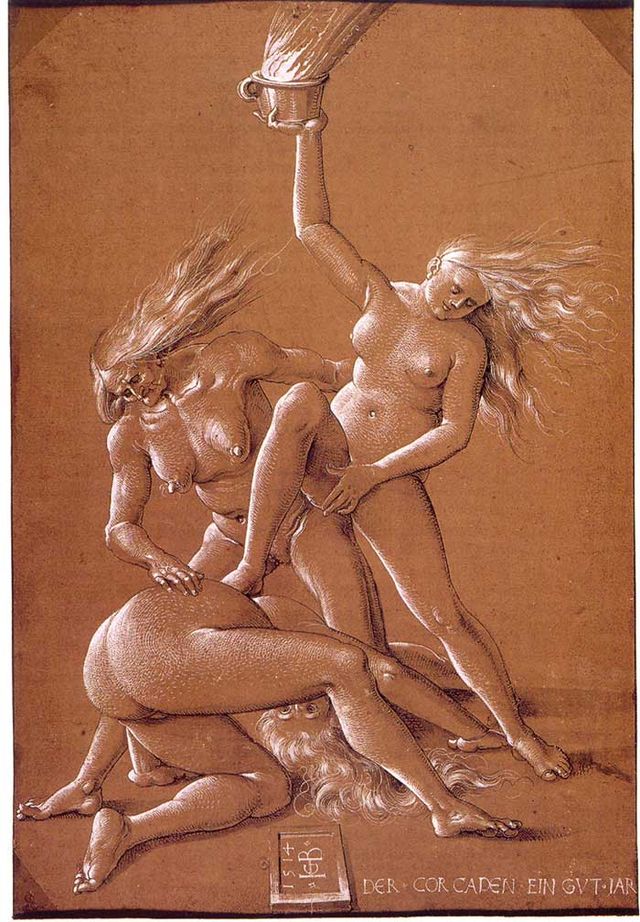 “I no longer cast attraction or love spells,” reveals Sirene when asked about her ritualistic sex life. “I did this for most of my 20s and although I had so much fun, it was truly chaotic. However, I was recently gifted a spell by a fellow stripper named Hope. She played a song on her steel drums and used rose quartz, a carnelian crystal, and a dick-shaped disco ball (‘Dickscoball’) in order to bring an orgasmic, romantic, sublime sexual experience to me. Sex magic, like sex, is about giving.”

The panoply of options for practicing sex magic is what makes the art so versatile and accessible. Like sex positivity, sex magic need not only be conceived of in ways that compel witchcraft practitioners into joining orgiastic bacchanals—unless, of course, they freely want to. Contrary to pejorative stereotypes that have been percolating since the early modern witch-trials, the secret sex lives of witches can be chaste or wild. They can involve a partner of any gender identity, a roomful of such partners, or not a soul, save for an anointed magic wand. Above all, sexual magic is an energetic exploration of the divine, which, as any witch will tell you, ultimately comes from within.

How To Hold A Dead Supper For Samhain

Get Back To Halloween's Roots With 2 Pagan Recipes