My Dating Life As A Transwoman: BUST True Story 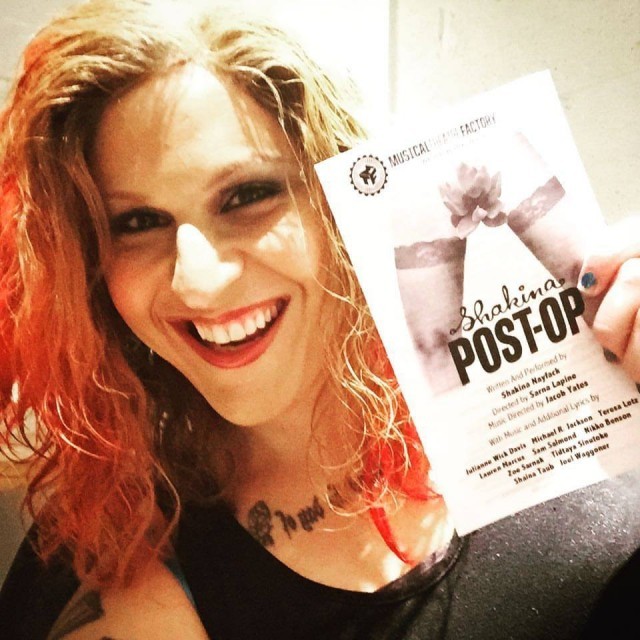 Last year was a hectic one, recovering from gender confirmation surgery (while writing a show about it), running a theatre company, getting on the scene as a trans actress... So much of my energy was spent working on and talking about becoming a woman in the world that I spent very little time actually being one. Year one is over, and I’m ready to get out there and take my new self for a spin.

Dating pre-op was its own adventure. I’d been relatively celibate for a while, my last few years posing as a gay man stunted by the knowledge that whatever sex appeal I could generate was really just false advertising. When I started my transition I became suddenly aware of the new sexual economy afforded to me: The world is full of hot straight guys who want to get fucked by chicks with dicks.

Topping isn’t really my thing, but I had a narrow window of opportunity to enjoy being a commodity fetish and wanted to make the most of it. Feeling sexy and desired just by being honest about myself was really gratifying, especially after hating my body for so many years. There weren’t a lot of dating options available to me at the time. Miscellaneous Romance on Craigslist was the first personals site I found that had m4t or t4m options. I was on OKCupid too, but after getting a death-threat from some dude I wrote the company a strongly worded email about their need to diversify gender options, and closed my account. I also had a profile up on anon.com and tryatranny.xxx — Yeah, try a tranny, that’s a thing.

Let’s be real, this wasn’t about dating, this was hooking up. The guys I would meet, they were just regular dudes with one thing in common: an attraction to pre-op trans women. I’m sure they had seen their fair share of tranny porn, but watching their faces as I undressed, or as they undressed me, was like watching Columbus discover America! (Historically inaccurate, but you get the idea). The sex was fun, exploratory, intriguing. I was learning how to get into my body, my breasts were growing and increasing in sensitivity, and I was gaining confidence in my feminine form.

My relationship with my penis changed as well, from one of loathing to one of tenderness. And these straight guys were into it. They handled me better than most of the gay dudes I’d been with. They’d be sucking or stroking it and call it my pussy or clit, I’d just laugh and let them go to town. Once this younger guy told me, “you’re pretty cool, most of the other girls charge.” — I’ll let you work out the problematics of that statement on your own. 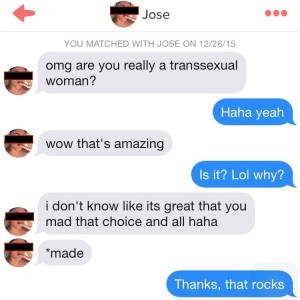 In my 15+ years as a gender non-conformist I’ve met a lot of guys who are into what I’m bringing, but our encounters are almost always shadowed in taboo, discretion, or fantasy. None of these dudes wanted to take me to dinner, none of these dudes were comfortable being seen in public with transwoman on their arm. We have T-girl porn and we have transwoman celebrities, but we lack a mediatized understanding of what it means to date—or dare I say fall in love with—a transgender person. I’m hoping ours will be the last generation with that problem. If more non-trans people would openly acknowledge their attraction to trans folk we could really start changing cultural attitudes about sex and gender on a fundamental level.

Post-op, things have changed. I don’t have the unique combination of equipment that satisfied my previous lovers, and having gone through a brutal year-long recovery, I’m in no hurry to give up what I fought for. Don’t get me wrong, I enjoy getting choked and fingered as much as the next third-wave feminist, but I’ve started to value my newfound virginity as a source of power, and I’m both excited and intimidated by the thought of letting someone else inside me. And I will always keep a special place in my heart for the first guy who made me cum, stayed over, and went out for coffee with me in the morning. It was a radical orgasm, but it was an even more radical latte.

A few months ago I re-opened an OKCupid account. I was surprised to see that there was a whole new matrix for listing one’s sexual and gender identities. On my profile I’m currently listed as a straight, queer, sapiosexual, women and transwoman. Unfortunately, most other sites haven’t gotten up to speed. Last month I was blocked from Tinder because a fair share of my matches reported me for being trans. The alternative, trying to swipe right while stealth, could lead to something far more dangerous, like harassment or violence. Tinder is well aware of the problem and—as of this writing—has yet to take action toward trans inclusion. 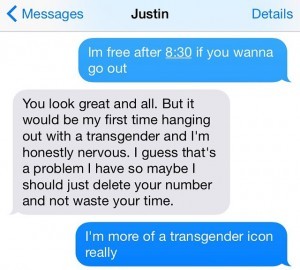 There’s also been a remarkable shift in the responses I’ve gotten from non-trans guys on the online dating scene these past two years. More dudes are asking respectful questions, or sending supportive messages. More dudes have a grasp of the transgender lexicon and know how to use trans terminology. Admittedly, I still feel like a curiosity. I still have to sift through tons of hypersexed advances just to forge a conversation that may, one day, lead to a proper date. And I’ve lost count of the number of times I’ve been stood up or flaked on at the last minute. Maybe all ladies are subject to this online, but these are certainly the romantic misadventures of a post-op transwoman in her mid 30s.

So to the fellas out there who do wanna get with that hot trans gal, here’s some friendly advice from one who knows:

• Lead with respect. Tell her she’s awesome for being true to herself, because she is.

• Your penis is not a weapon. Neither is hers.

• Never underestimate the value of an intense make-out session.

• Let her take the lead and she’ll show you what she wants. If there’s a question, ask.

• The three-day rule is for losers.

Here's What It's Like To Be A 22-Year-Old With Cancer: BUST True Story