Review of Vär's "No One Dances Quite Like Our Brothers"

Details
BY BUST Magazine
IN Music
Published: 24 May 2013 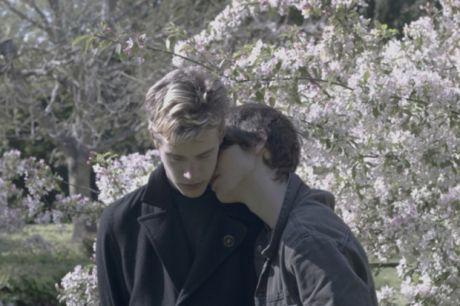 When I tell Loke Rahbek of the Danish band Vär that their debut LP No One Dances Quite Like Our Brothers (Sacred Bones Records) makes me feel like I’ve just drank a little too much GHB, he tells me he actually likes the description. It makes sense to equate Vär’s dark, sludgy electronic feast to the drug commonly associated with date rape.

“I knew a guy who died from GHB once,” Rahbek says.

I tell him that you have to be careful on GHB and not mix it with anything else or even take too big of a dose. It is, after all, a date rape drug.

“Maybe there’s a bit of that in the record,” he says. “It is a utopian or dsytopian piece of work and they are dangerous too. In the same way as GHB, it suck you in. It is not suitable for living in, but to do it once and a while is good and the effect is stronger.”

It’s an interesting way to think of one’s own body of work, but the cold, disconnected nature of it makes sense to the project. Vär started a few years back when Rahbek met Iceage front man Elias Bender Rønnenfelt in the same, incestuous music scene in their hometown of Copenhagen. The two men decided to embark on the project right away.

“I think there was a need [for Vär],” Loke says. “Elias and I had just met and it was an easy way to get to know each other. Creation is, in nature, a very intimate thing, so starting off your relationship with a shared creation makes  relationship move very fast, like sex on a first date.”

Vär released two brief cassettes, two 7”s on Rahbek’s Posh Isolation label and finally, traveled to New York to write and record their debut LP for Sacred Bones last year. Working and recording with Sean Ragon of Brooklyn-band Cult of Youth (in the studio he runs out of the back of his record store) as well as adding Kristian Emdal (of fellow Copenhagen punk band Lower) and Lukas Højland to record the LP, No One Dances Quite Like My Brothers is a twisted approach to synth pop, reflecting the bleak, sensitive landscape of their home land as well as a charging, sexualized vapidity to the tracks. It’s a militant record that talks about youth, sex and beauty while forcing itself through your mind, leaving scars after every note rings out. Margaret Chardiet of New York noise project Phamakon even did an eerie spoken verse for the album. Rahbek insists that No One Dances Like My Brothers is not a rock record and should not be treated as such. It’s more conceptual, a product of its environment and time frame. As Rahbek says, “This is not a Danish album. This is a European album recorded in America.”

“It is not a project suited for touring. It’s more about energy and it would be difficult to do that every night. [Vär] is a small theatre of cruelty.”

Rahbek insists that he never aspired to be a musician, but when he heard noise music for the first time, he was inspired. He played in the band Sexdrome and started his own independent label which releases mostly experimental music. “I hardly play an instruments,” he admits. “I would not be able to tune a guitar, but sound alone is a very effective tool.”

But a lack of traditional musical knowledge hardly matters when you have a shared creative intent and, as Rahbek says of him and bandmate Rønnenfelt, as “shared narcissism.”

Just like a dangerous illegal drug, what Vär has created is rare and strong and Rahbek’s philosophy for digesting it’s content is similar to recreational substance abuse. “Do as much as you can, almost too much, before you do it again. That is much better than doing a little bit at a time a lot of the time.”

Vär should be listened to in one blast, then sit back, digest and enjoy because it will be a while until you feel this way again.

Vär plays in Brooklyn Saturday May 25, with Pharmakon.

Tags: Music , album review , music review , Vär
Support Feminist Media!
During these troubling political times, independent feminist media is more vital than ever. If our bold, uncensored reporting on women’s issues is important to you, please consider making a donation of $5, $25, $50, or whatever you can afford, to protect and sustain BUST.com.
Thanks so much—we can’t spell BUST without U.