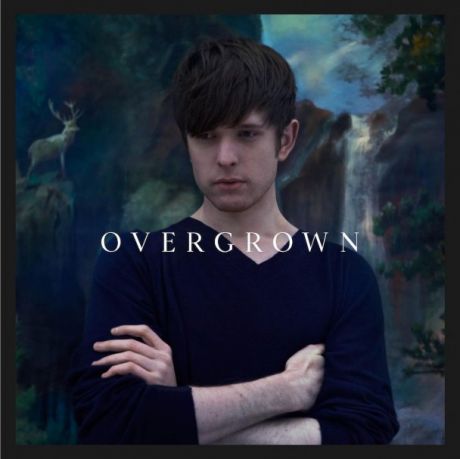 I had a professor in college once tell me that John Milton was the most humorless poet he knew of. He could be warm and ironic, but he never joked-- he was up to something too serious for that. You could say the same of James Blake, whose new album Overgrown was released this week. It's the second LP from the 24-year-old British musician who has more than twice that many EPs to his name. Blake seems to have backed into music production with the same diffidence with which he's embraced singing, his first album a groundwork of tightly-focused electronic recordings that were generically referred to as post-dubstep. Critics and fans still bicker over that classification, while Blake himself has gently evaded it, especially as his textured, sample-heavy music made room for austere piano ballads and torch songs. Overgrown is as cool-headed and vocally driven as Blake's self-titled 2011 debut or the even quieter EP that followed it, 2012's Enough Thunder. But if Blake hardly seems to break a sweat across his 10 new tracks, he doesn't seem ready to crack a smile either.

That's not such a bad thing-- Blake's music can feel like an emotional Rubik's cube, monochromatically melancholy, but constantly searching for a way out, or a way to let someone else in. "I don't know about my love," he sang on "The Wilhelm Scream," "All that I know is I'm turning, turning, turning, turning." If that made for a rather cerebral kind of emotionalism, it was often a little abstracted, and otherwise personal lyrics (like "My brother and my sister don't speak to me / but I don't blame them" in "I Never Learnt to Share") could flatten out under song structures based in repetition. On "I Mind," for instance, Blake chanted those two syllables the way kids throw pebbles into water to watch it ripple. It's intriguing, but you don't stop to consider what it is that he minds, and you don't necessarily care that you don't.

Overgrown generally has less formal experimentation, leaving more room for a narrative impulse. Don't hold your breath for Blake to write a latter-day "Hurricane," but the snatches of detail that do turn up can't help but catch your eye. "Take a Fall for Me" features rap verses by the Wu-Tang Clan's RZA recounting "candlelight dinners and fish 'n' chips with vinegar, with a glass of cold stout or wine or something similar [...] strong pheromones and cologne [...] the stench of her." Of course, these are RZA's lines, not Blake's, but the song is distinct from other high-profile collaborations like last year's "Fall Creek Choir Boys," where Blake and Bon Iver's Justin Vernon laid complementary vocals on top of each other, effectively sharing a lyrical "I." Here, Blake's voice can only be heard delivering short refrains like a one-man Greek chorus-- "take a fall for me" and "you can't marry her yet"-- but they're addressed to someone else who's present and probably listening. In what might be a first for Blake, there's sociability, and even sympathy, in loneliness.

Blake has always been an ace at making use of auditory negative space. Abrupt stops and lingering pauses in the songs on CMYK and Klavierwerke prevented their minced, hiccuping textures from dissolving into themselves. As a result, small sounds became big. By comparison, "overgrown" only seems to describe about half of the music on the album. The only other major collaboration is possibly its densest-- "Digital Lion" was produced with Brian Eno, and it bears some trace (if only some) of the elder statesman's impressionistic touch. Like "Retrograde" and "Voyeur," the song is washed in snowy ambient tones that sometimes kick into a siren-like wail. It's intriguingly kinetic, but tends to stay in one place like a whirling dervish. "Voyeur" throws down a clubby beat that strikes me as a bit silly, while "Retrograde" handles these relations of scale with greater finesse. Blake's voice is pliant and clear, and it doesn't drown in the flood of urgent buzzing he lets loose over the whole thing.

My aforementioned professor said we shouldn't hesitate to praise beautiful things, and Blake's singing deserves positive attention. The usual suspects once dismissed his heavy-lidded cover of Joni Mitchell's "A Case of You" as a slavish regurgitation, but that criticism focuses more on a notion of how covers should sound than on the simple power of Blake's voice. I can't think of many other vocalists who can deliver such icy, minimal melodies without sounding tranq'ed out (no disrespect, Romy Madley Croft). Blake moved toward sparer, more vocal arrangements around the same time that EDM and Skrillex-style dubstep were surging into mainstream pop. Familiar taxonomies sometimes lagged behind, and it was a few years before Blake was being referred to as a musician rather than a DJ. No sooner had that happened than he acquired yet another label-- "singer-songwriter"-- and sometimes in a spirit of demotion.

But whatever your position on what Blake does best or what he should be called while doing it, his piano ballads deliver an undeniable punch to the chest as powerful as anything by similar artists like Perfume Genius. "Our Love Comes Back" is as elegiac as older highlights like "We Might Feel Unsound" or "Measurements," and when he sings "please don't let me hurt you more" on "DLM," it's as if you realize for the first time how exquisitely miserable it feels to be really, truly sorry.

And for what, exactly? We may never find out. Perhaps the new album's greatest merit is that it feels roomier than anything else Blake has done. Earlier songs, for all their impressive workmanship, could feel a little airless and single-minded. There's a breezier confidence governing Overgrown, but it's not enough for Blake to shed his armor or tell all his secrets. But who would want him to? "I don't want to be a star," he sings on the title track, "but a stone on the shore." That's a less isolating position, but not by much. It's possible too that Blake's just making a self-deprecating joke about becoming famous, but if you ask me, he probably isn't.