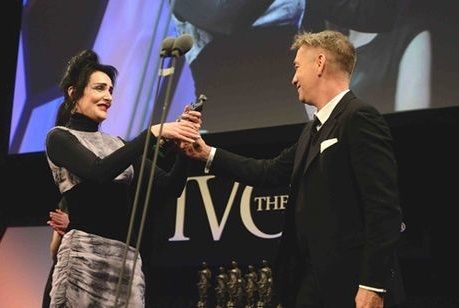 One of BUST’s fave musicians, Siouxsie Sioux, was awarded an IVOR at the Grosvenor House Hotel in London’s Park Lane on May 17th to a standing ovation from a music industry crowd. The special inspiration award was presented to Siouxsie on stage by her close friend John Maybury, and was preceded by a five-minute film depicting Siouxsie’s life and career--from forming Siouxsie and the Banshees with Steven Severin, to recording a track as a solo artist, "Careless Love," for Mr. Maybury’s film The Edge Of Love in 2008.

The Ivors, an incredibly prestigious songwriting-based award ceremony, is now in its 57th year. American songwriter Jimmy Webb was also honored at the awards, who actually wrote MacArthur Park, a song covered by Donna Summer whose tragically early death was sadly and spookily announced straight after the awards.

It’s been five years since Siouxsie released the fantabulous solo album Mantaray, but last October at Q Magazine's music awards, Siouxsie remarked that she’s presently working on some new material. Hopefully it will see the light of day sooner than later. Whenever it’s released, we’ll be very happy to hear the results. Congratulations on your IVOR, Siouxsie!