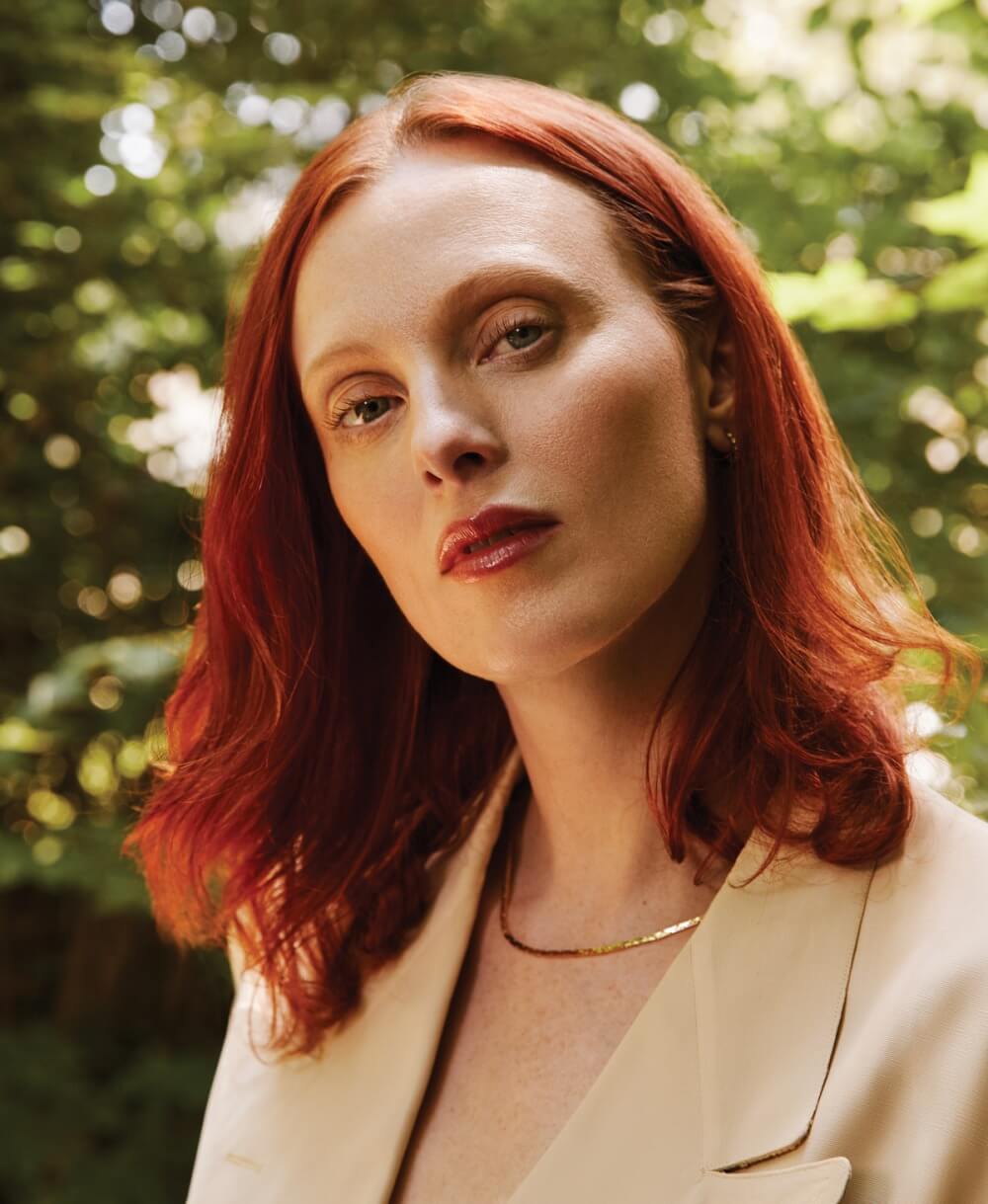 Karen Elson is finally ready to have some fun. “Being a model, I felt for many years like I had to work extra hard to prove myself as a musician. I felt like I couldn’t just be good—I had to be incredible at it. I had to almost bleed for it,” the singer/songwriter/supermodel says of her recording career, which began with the 2010 album The Ghost Who Walks.

“I got older, and I got more comfortable in my skin. Also, there was something about COVID—it’s been such a reckoner. There’s just been this shift in me,” says Elson, 43. “I can’t take myself seriously anymore. I really can’t.” 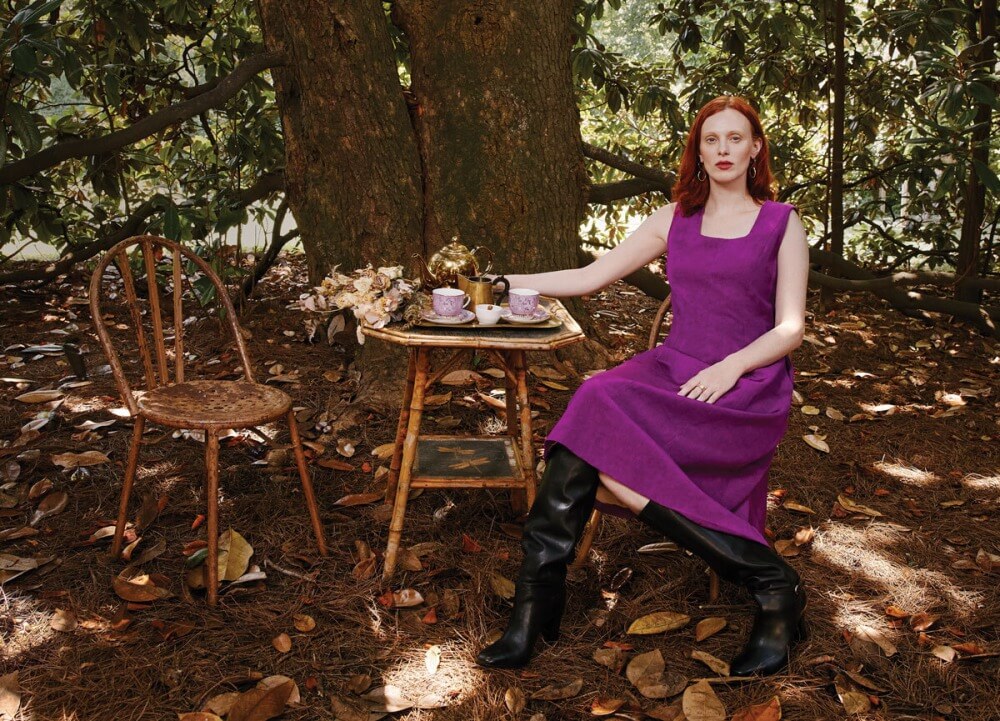 Not taking yourself seriously must be easier said than done when you’re one of the more recognizable faces—and heads of hair—in fashion. The U.K.-born Elson, who now calls Nashville home, has been working as a model since she was 15 and has walked the runway for everyone from Anna Sui to Marc Jacobs to Alexander McQueen, and appeared on every imaginable major fashion magazine cover. In 2020, she released The Red Flame, a memoir-meets-coffee-table book chronicling her career so far. In between that and raising the two teenagers she shares with ex-husband musician Jack White (they divorced in 2013), she’s also an advocate for models. As a member of the Model Alliance’s Worker Council, Elson is a visible and vocal advocate for the Fashion Workers Act, which would regulate modeling agencies and establish labor protection for models, hair and makeup professionals, stylists, and other creatives. 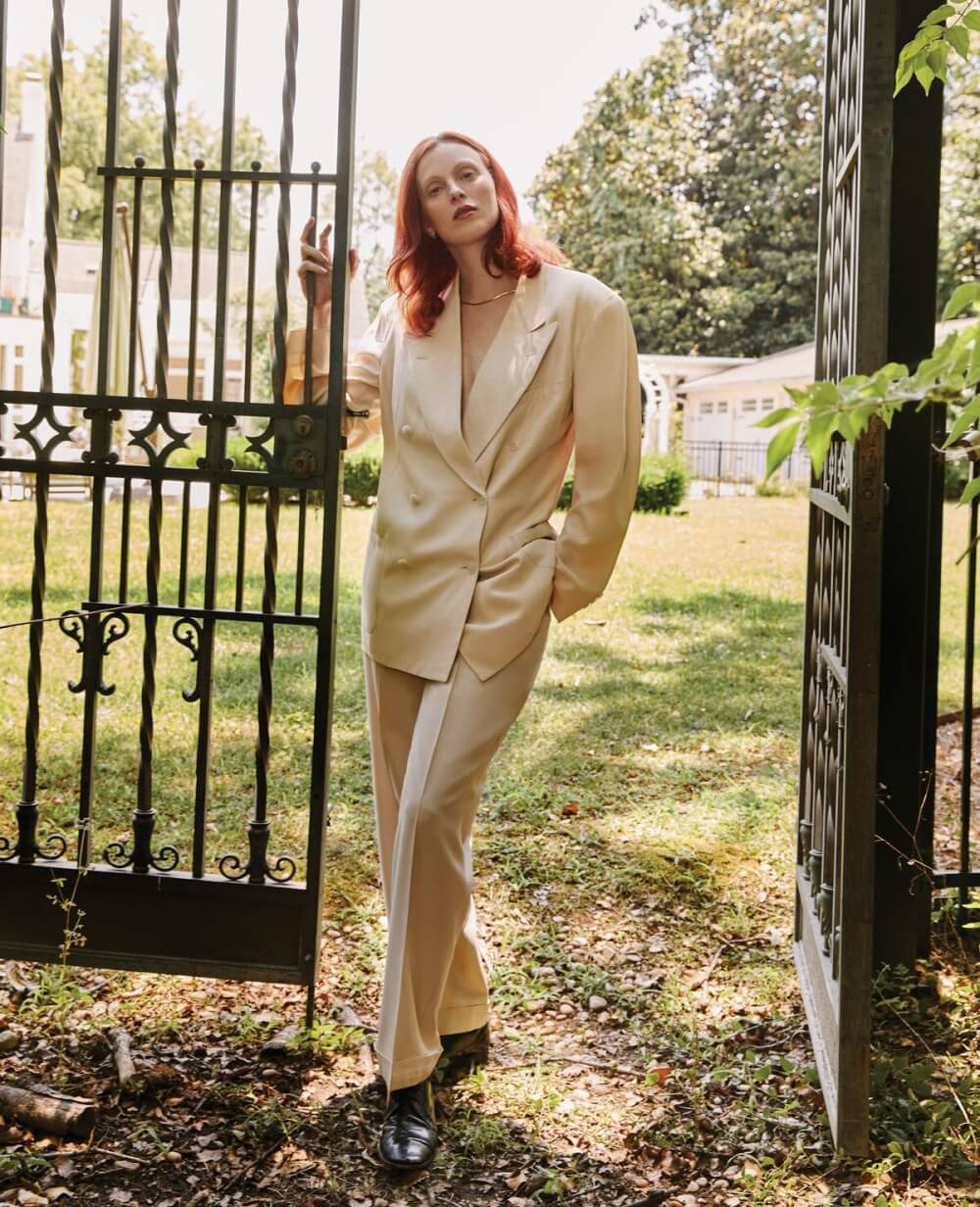 For a time, the pressure she felt caused Elson to fall out of love with music, she says, but at the start of the pandemic, she began taking long walks around her Nashville neighborhood, listening to the stuff she grew up on—Nirvana, the Hives, Cocteau Twins, Sonic Youth. “I had this really extended downtime, and it was the first time since I was a teenager that I stayed in one place long enough to really consider how I was feeling,” says Elson. “When I was young, music was my escape from pain. Certain songs made you feel like, ‘I’m not alone in the world and this other person understands these weird, complicated feelings, I also have.’ I became like that teenager in my bedroom again. I fell in love with the escapism that music presents.” 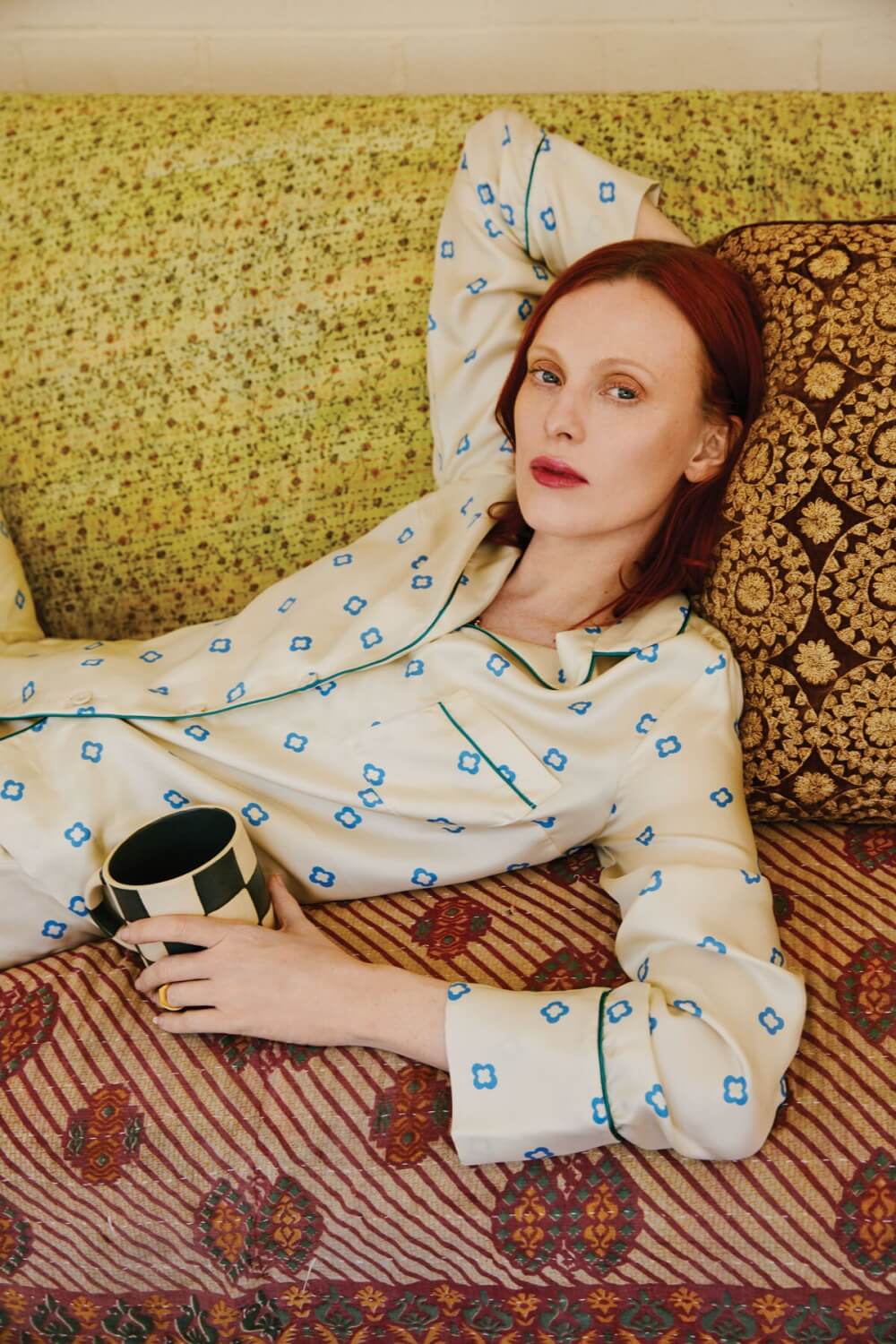 Letting go sounds good on Elson. Her latest album, Green, released earlier this year, is a clear and deliberate shift away from the moodier sound that defined her earlier work. For Green, Elson joined forces with fellow Nashville residents Daniel Tashian and Ian Fitchuk, acclaimed for their collaborations with Kacey Musgraves, to create a sound that is happy, silly, and reflective. “My first few records definitely lend themselves to lonelier concepts—and darker ones,” says Elson, whose second album, 2017’s Double Roses, was reductively called a “divorce album” by many critics. But this time, she explains, “I wrote the majority of the album during the height of COVID, when there was just so much uncertainty in a manner that, globally, we hadn’t experienced before. I felt like the world was so heavy that I needed a light—emotional sunlight.” 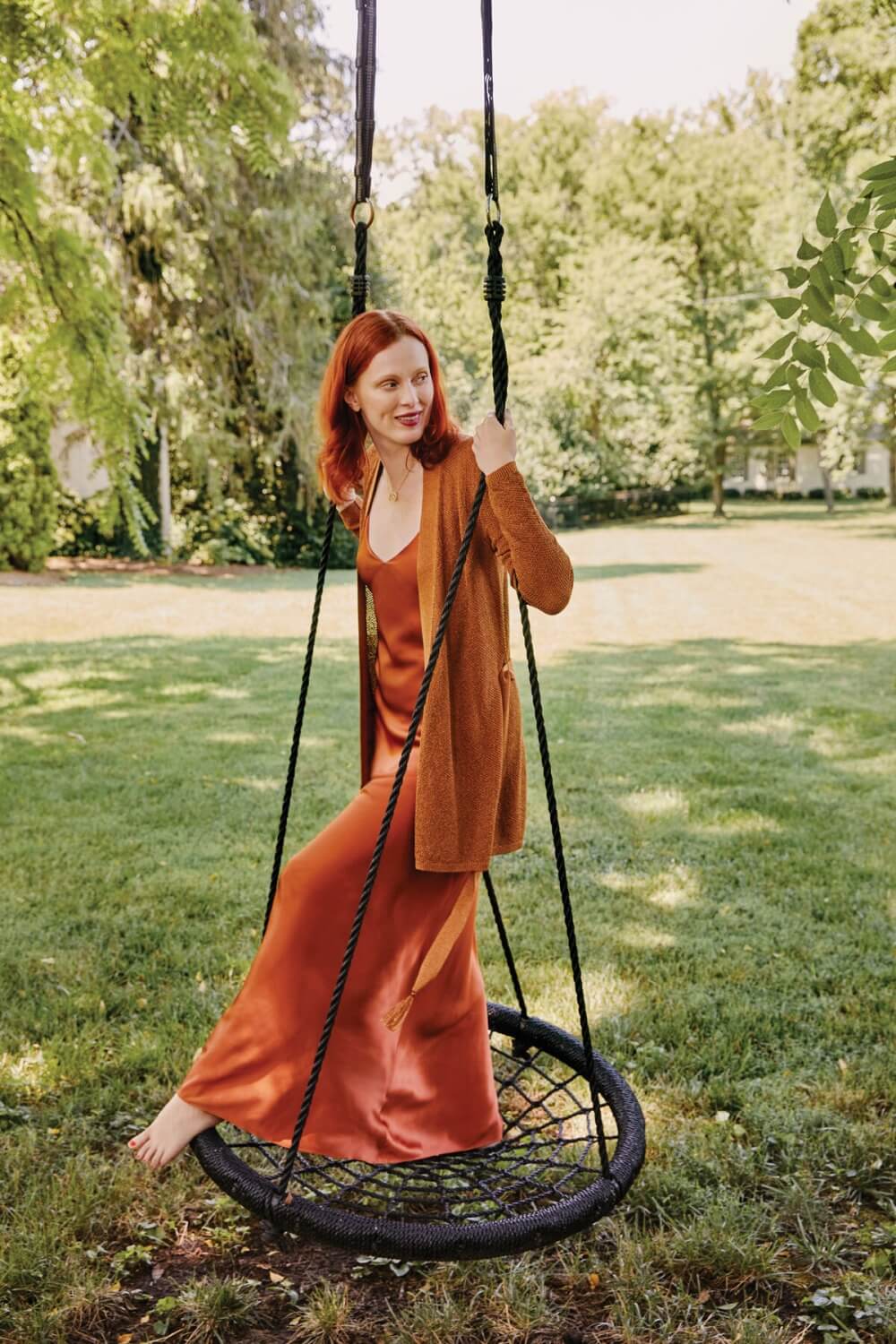 Tracks range from the playful “Modern Love,” on which Elson recalls the pitfalls of being an old soul looking for love in the Internet age, to “Fergus in the Sun,” an ethereal tribute to her cherished cat, written the day before he died. “I wanted it to feel like, if you were away on vacation and you heard this record, you could just sit there with your drink and enjoy it. I wanted it to sound good on vinyl. That was the motivation. [There] was not any dark, tortured, artist motivation for this record.”

Over the summer, Elson performed songs from Green during a three-day residency at Café Carlyle, New York City’s famed cabaret. It was a full-circle moment. “I saw Eartha Kitt there when I was 21,” explains Elson. “She walked past me and she took her mint out of her mouth and put it on my dinner plate, and I was just like, ‘I love this woman, and one day I want to do what she’s doing.’ And 20 years later, there I was on that stage, performing."

There’s a lesson to glean here, and Elson says it plainly. “Life is short, and life is fleeting. We’ve got to enjoy every fucking minute we’ve got here.”