From The BUST Archives: Buffy Sainte-Marie Discusses Her 2009 Album "Running For The Drum," Feminism, The 1960's, and Breastfeeding On "Sesame Street?" 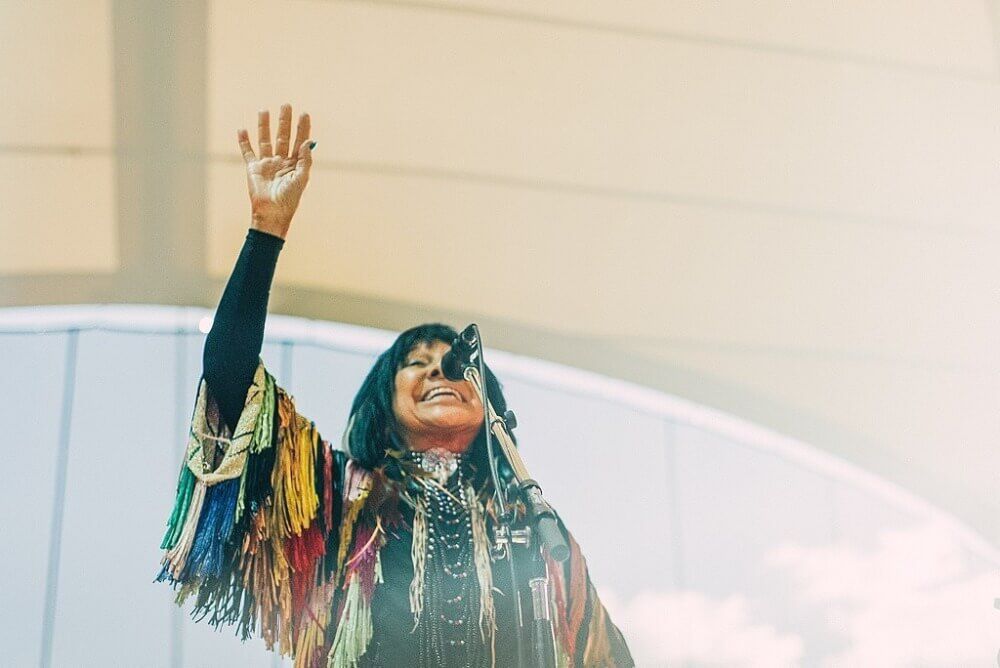 Throughout her 47 years in show business, Sainte-Marie has always done things on her own terms, and she has piles of awards to show for it, including an Oscar and a Golden Globe for her most widely recognized songwriting credit, “Up Where We Belong,” which she penned for the 1982 film An Officer and a Gentleman. And despite her unwillingness to fit into the rigid girl-pop mold of the ’60s, she was a success from the very beginning, nabbing Billboard’s Best New Artist award for her first aptly titled album, It’s My Way! in 1964, which famously featured her playing the mouth bow. As the ’60s progressed, she wrote iconic protest anthems like “Universal Soldier” and had hits with “Co’dine” (one of the first pop songs to openly reference drug use), and “Until It’s Time for You to Go,” a love ballad unabashedly written from the point of view of a woman in a noncommitted relationship. The latter was covered by Cher, Barbra Streisand, and Elvis Presley, and her material is still being performed by such varied artists as Courtney Love (“Co’dine”), Neko Case (“A Soulful Shade of Blue”), Dean & Britta (“Moonshot”), and Oakley Hall (“Co’dine”).

Sainte-Marie met with me in New York recently to discuss her first release of new material in 13 years, Running for the Drum (Appleseed Recordings). It’s a collection of powwow, protest, club remix, rockabilly, and, of course, love songs, packaged together with a DVD documentary that will knock the socks off of fans and Buffy newbies alike. Dressed in a black top, black stovepipe jeans, pointy boots, a white jacket, and a beaded breastplate necklace (given to her by photog Annie Leibovitz), Sainte-Marie looks so amazing, it’s impossible to believe she’s actually 68. But she is, and she’s still rocking.

BUST: You’ve said that you grew up “a tan girl in a white community.” What was it like growing up with your adoptive parents in Massachusetts in the ’40s and ’50s?

B: Some of your songs feature you playing an unusual instrument called a mouth bow. Can you explain what it is and how it’s played?

BSM: I make them. You find a bent stick, and you attach a guitar string to both ends. The mouth bow is probably the oldest string instrument in the world. It’s based on a hunting bow. You put it up to your mouth, and your mouth becomes a resonating chamber like a guitar. As a matter of fact, you know Mick Jagger’s first movie, Performance [1970]? I multitracked mouth bows in that.

B: What was it like when you first came to New York in the early 1960s?

The early ’60s were about coffeehouses. They made it possible for students to go out at night and hear each other’s music. The scene had everything—Joan Baez was singing genuine folk songs, Bob Dylan was writing his own songs. Then there would be flamenco players and blues players, so it was everything at once.

That was one of the reasons I’ve always felt comfortable making all different kinds of music. It comes out of that broad perspective, instead of being like the Supremes with songs that are all a certain style. Usually that’s the way it’s done. It makes it easy for record companies to figure out what bin to put you in. I mean, who the heck knows what bin to put my music in?

B: It comes up as folk on iTunes….

BSM: That’s it. They call it folk. [laughs] Anyway, in the ’60s, I started playing my songs at the Gaslight, and everybody liked it, and Robert Shelton of The New York Times came down and heard me play. He gave me this great review, and the Gaslight blew it up into this big sign and put it outside.

B: So, how did you get signed to Vanguard Records?

BSM: Well, they heard me at the Gaslight and they wanted me to record. The first time I got an invitation to go to Florida in February, [I thought] “I love show business!” For me it became about the travel. Something that made me different from the other singers of the time was that I’d use my airplane tickets to get me to indigenous areas and then I’d hang out. So if I had a concert in Sydney, Australia, I’d be out with aboriginal people. If I had a concert in Stockholm or Copenhagen, I’d be up in the Arctic with Sami people and of course with Native American people in North and South America too. But I was kicked out of the U.S. [market] pretty early, when Lyndon Johnson came along, and recently, I found out that I was on Richard Nixon’s enemies list. 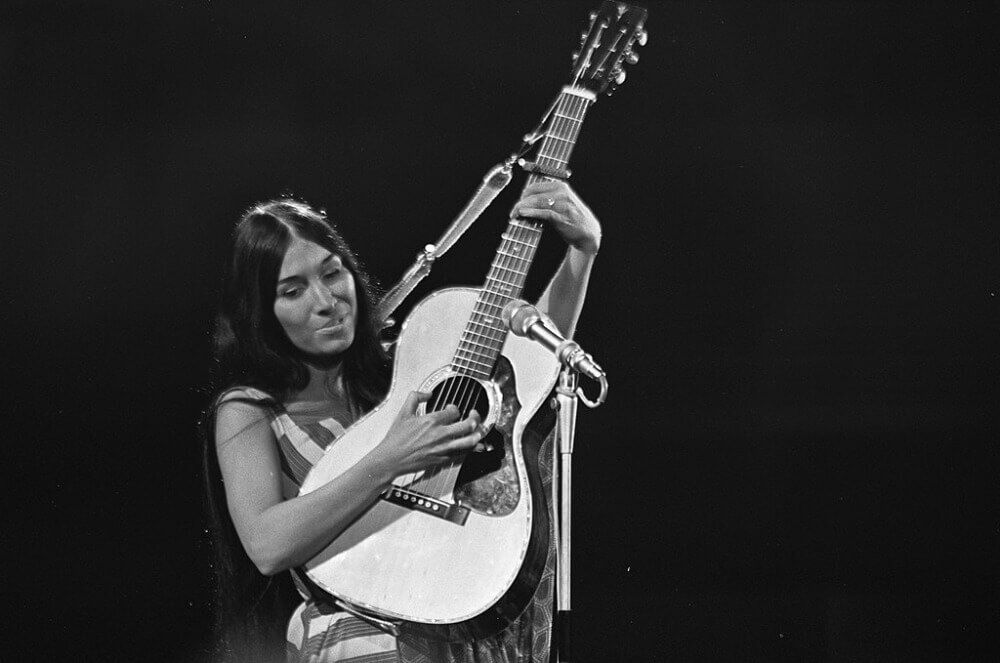 B: Were you blacklisted by the government more for your anti–Vietnam War views or for being vocal about the mistreatment of Native Americans?

BSM: I don’t know much about that. They don’t tell me. Lyndon Johnson had FBI surveillance on me, probably because of my [antiwar] song “Universal Soldier.” And during the Nixon years, it would have been about Indian rights because we were kicking up a lot of truth. That was when native land was being transferred in secret to the U.S. government, especially the parts that included uranium, and I was out there talking about it on television. But I didn’t find out about my FBI surveillance until the ’80s, and I only found out about Nixon a couple of years ago. I got my FBI papers and they’re all blacked out. I continued to do concerts in the rest of the world. I just thought the U.S. didn’t care anymore.

B: What role does feminism play in your life and philosophy?

BSM: When I came to Greenwich Village in the ’60s, I was really green. I was afraid of men, really. I didn’t know that it was customary to kiss a businessman on both cheeks, and it creeped me out. I didn’t drink so I didn’t hang out at bars. The only reason I’m even on the peripherals of show business is because of coffeehouses. I was uncomfortable with men drinking because I knew what came next. Feminism wasn’t happening in those days. When I was hanging out with the founders of the American Indian Movement, they were pretty disrespectful to young women. I really loved them, but they didn’t have their heads together, and certainly, show-business people didn’t. Especially around a young woman looking like I did, because I looked really unusual, and I got a lot of attention and I had a figure. You know, the first singing dress I had, I ordered from the Frederick’s [of Hollywood] catalog! [laughs] I thought that’s what pretty was. But feminism didn’t start until a little bit later. I can’t say that I was a part of it, but I loved it.

B: In your travels, meeting with various aboriginal people, which culture do you think offers women the most equality?

B: In 1974 you released an album called Buffy with a revealing photo of you on its cover. Was this shot approved by you, or was it the label using a sexy picture to sell records?

BSM: No, I wanted it. It was about feminism. I was standing up for a woman’s right to take her own shirt off. Everybody said, “No, you can’t do that!” Of course, Sears put a pastie on it. Some of the people I was involved with thought it was a terrible thing to do, but I feel as though breasts are personal and sexuality is personal and I have a right to talk about it. There were a lot of people burning bras in those days, and there were a lot of women going topless. I think breasts are beautiful, and I don’t like the idea of them being considered smut. Also, a couple years later, I was breastfeeding on Sesame Street, so they kind of go together. It’s the same attitude.

B: That’s right, you actually breastfed your son Dakota in front of Big Bird! What a thrill that must have been!

BSM: Big Bird was just sitting in his nest and I’m alongside him breastfeeding my baby, and Big Bird says, “Whatcha doin’ Buffy?” And I say, “I’m feeding the baby.” And he says, “Well, that’s a funny way to feed a baby.” I explained to him that the baby was getting everything he needed and I got to cuddle him, and [Big Bird] went back to playing, which is what children really would do. No titillation factor at all. For me, to move from being gagged and thought suspect for speaking out about Indian rights to getting a job on Sesame Street was perfect. I was being denied an adult audience because I couldn’t get airplay, but I got to speak to kids before they got into stereotyping and could speak to caregivers and tell them the simple message: Indians exist.