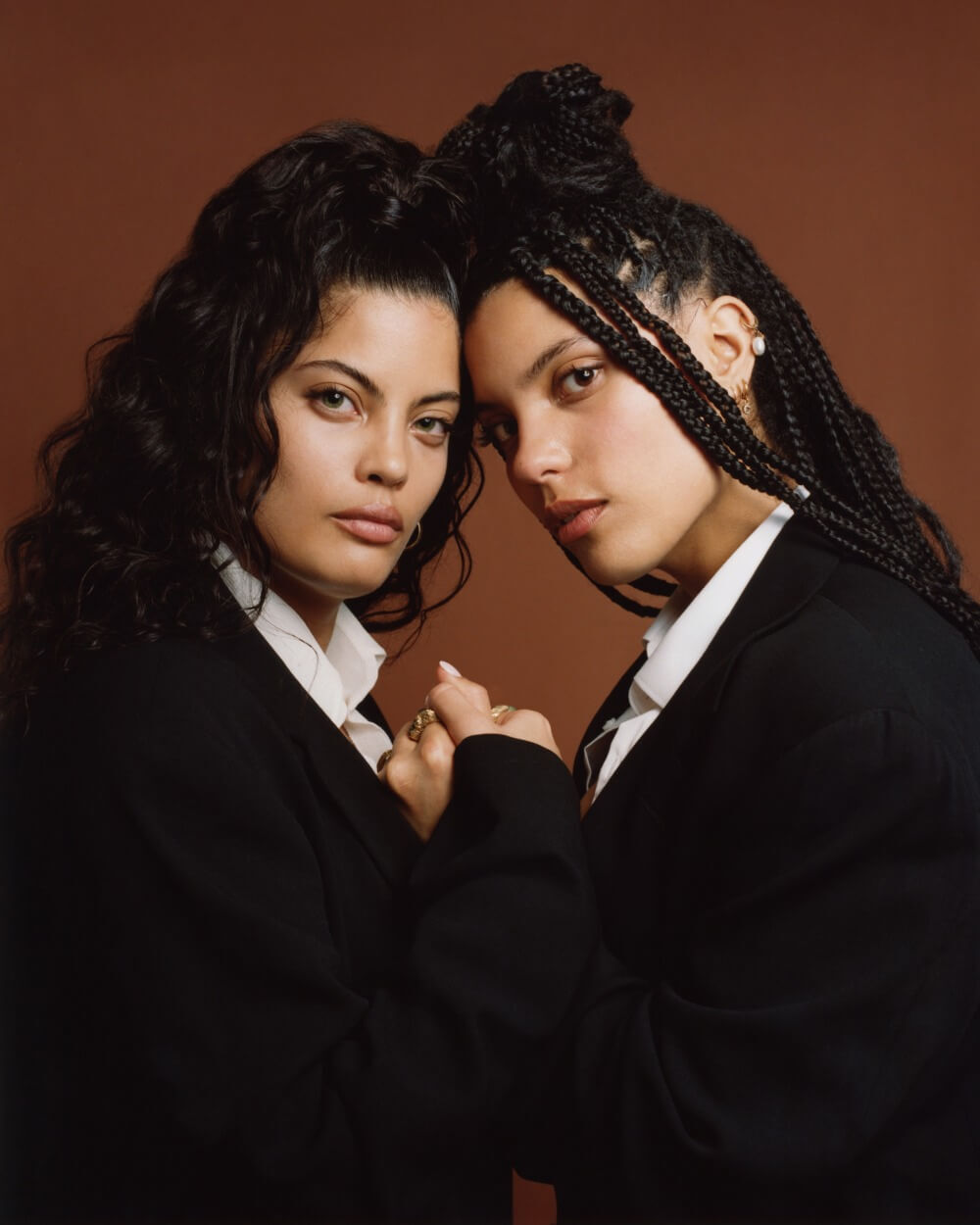 Twin sisters Lisa-Kaindé and Naomi Díaz make up the musical duo Ibeyi. The Afro-Cuban French musicians burst onto the scene in 2015 with their self-titled debut album, Ibeyi, a collection of tracks about love, family, and death. The second single “River” peaked at number 15 in France and received acclaim for the powerful and minimalist video concept. Appearances in Beyonce’s short film for 2016’s Lemonade, soon followed as well as a second album, Ash, in 2017.

The children of acclaimed Cuban percussionist Anga Diaz, music was a constant in their lives from a young age. Upon his 2006 death, Naomi learned to play his signature instrument the cajon, with Lisa taking up songwriting a few years later.

Taken from a poem in The Egyptian Book of the Dead, their 3rd album Spell 31 was released on May 6th. I caught up with the girls a few weeks ago via zoom, Lisa in the UK, with Naomi connecting from Paris.

We discussed their new album, touring again, and The Egyptian Book of the Dead.

Bust: I’ve listened to the album and it’s very beautiful. How would you describe the concept of the album?

Lisa: Thank you so much for listening to the album. Well, it’s an album that we wrote while we were touring and during the pandemic. We thought that we would have [all this time] to travel the world and go do the things we never had time to do in the past 10 years cuz we were working and then the pandemic happened. And so, we had to stop touring, stay home, and in staying home, I think that was the real birth of the album, and the intention behind it, which was to heal and to celebrate.

Which are both being things we didn't take the time to do before. Cuz we were working like crazy, and I think suddenly we had the time and the perspective to heal from a lot of stuff. And, the realization that we hadn't celebrated so many things that were so important to our lives. So, we decided to do it with music.

B: For me, one of the stand-out songs is “Tears are our medicine,” is there a story behind it?

L: I realized that people around me that I love often call me a “llorona” which means the cryer in Spanish, and not in a mean way, but it's true. I cry all of the time: I cry out of frustration, I cry out of joy, I cry out of pain. I have realized that it had been a long time since I've seen my loved one’s cry, especially when they're in pain or when they are frustrated.

And those were really difficult years for all of us of bubbling and realizing a lot of shit, and I think we all needed to release. So it was my way to tell them, you know, 'I'll hold your hand.'

B: Naomi, you’re singing lead for the first time on this album. What changes did you undergo during these last few years?

Naomi: I'm a really private person and some songs I wouldn’t sing if it was only me.

L: I also think that you, you knew that you wanted to do an album that was more hip-hop and concentrating on the beats. You are the one that the kind of steered us into that direction. You also knew you wanted to sing this time around. You also knew you wanted songs to be about you, even if we said that, we wouldn't say which one were about you on the album, but it’s the first time I wrote music thinking about how you think and your perspective, which was also a new thing [for me].  And you sing more than me on this record.

N: Yeah, it’s true. And Ibeyi is always the middle ground between Lisa and I. And we are twins, we grew up the same, but we’re really different. To be honest, I think we’d be the best person if we were only one, because everything I have she has, and everything she has, I don’t have. I think if I was doing music alone it would be really mainstream but less interesting and if it was Lisa, it would be really interesting but maybe too complicated for everybody to understand and feel. Ibeyi is always searching for the middle ground.

B: I love “Lavender and Red Roses” and it came out at a time when I was letting go of something that was no longer good for me. Can you break down the video and concept of the song for us please?

B: I think it's supposed to be about a woman who is trying to pull a man up or make a man more, but to her detriment and finally she has to just let him go.

N: That’s funny because a lot of people were like ‘why did they let they guy fall?’

L: The comment that was so funny to me ‘Nai, was ‘why did they let the bro down?’ Why would they abandon the bro? It’s so funny cause someone else wrote in the comments, ‘it’s time for the bro to learn how to stand up on his own!’ I think that’s the whole point. It’s not about killing him, it’s not even about abandoning him, and actually, it's not even him. It's any relationship that is based on that problem, which is: I'm gonna give you love so you can save yourself. And that can’t work cuz as soon as I have to love you so you can save yourself, you don't love yourself enough. You're waiting for me to give you everything I have, so you can feel okay, and that is impossible.

B: What’s your connection to the book The Egyptian Book of the Dead?

L: Naomi and I, when we go to the studio, we always bring books­–it’s part of our process, it’s always been. Sometimes we use them, sometimes never, sometimes it’s a word.

And this year Richard had brought The Egyptian Book of the Dead. And we were having a conversation on the second day at the studio. After making “Made of Gold,” the song was still trying to find itself, and was not really working yet, and we didn't really know why, which is the normal thing. You work on it. And then you discover it as you are trying things. And Richard said, ‘open the book,’ and we opened the book and it was “spell31.” And the spell said:

Oh, you with a spine who would work your mouth against this magic of mine, it has been handed down in an unbroken line. The sky encloses the stars and I enclose magic.

I think what was the most insane and shocking for us is the idea that suddenly when we read the spell, we knew that that was kind of a sign from the universe and we were protected. And we knew to meant that our ancestors were there with us. We knew we needed to call the album Spell 31 it was immediate.

B: So now that summer is here, what are you two looking forward to?

N: For summer we’re going to do a lot of festivals, mainly in Europe and then the tour really starts in the US in September in LA.

B: How are y’all feeling about touring again after two years?

N: We love touring! We love singing, we love meeting people! Seeing the people sing and dance, we do this for the touring. I know there are some artists who hate touring, but personally, we toured each album for two years. It’s a lot of work and it’s tough, but we love it.

Spell 31 is out now and you can see Ibeyi on tour in Europe now. Or pick up tickets to see them live in the US here.