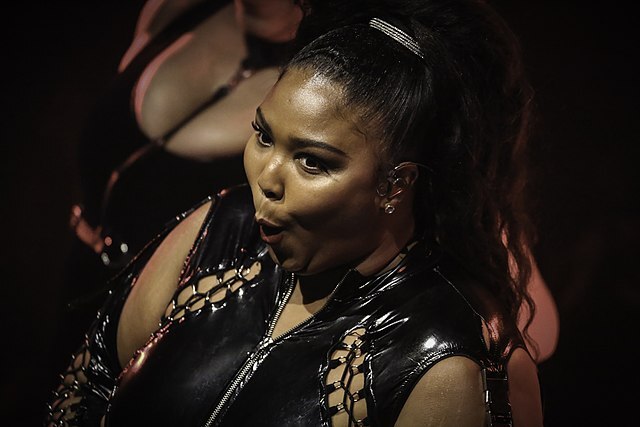 That’s right! Queen of Tempo and star of the new TV series Watch Out For The Big Girls, Lizzo has a new album coming out on April 14th. Her single, “About Damn Time,” debuted on James Corden’s The Late Late Show on Tuesday.

Sporting a baby-blue, one-shouldered vinyl maxi dress, the artist exclaimed that she'd been working on the album for "three freakin' years!", and detailed her review process before putting out an album, explaining that her friends were her first round of testers. “They’ll tell me, they’ll be like ‘this ain’t it, girl’ or once they start twerking I’ll be like ‘this is it’.” She also mentioned that one of her last listeners is her mother, stating she is a Virgo and therefore a “harsh critic.”

But when Corden pulled out a record player and Lizzo’s “top secret” single record, the audience got to hear a taste. A fun track with disco influences and reminiscent of Whitney Huston’s Million Dollar Bill, Lizzo’s new track got everybody up and dancing. Bring It On actress Gabrielle Union was also a guest on the show, and the two women fell into a groovy little two-step together as the song played, syncing up with the music and each other. Lizzo even prompted Union to be the first to create a viral TikTok dance for her song, squealing, "It's your TIME, GABBY!" The new song, the album's first single, seems to be an anthem of self-love, growth, and optimism. The music is fun, light, and carefree, and the lyrics radiate a relaxed, joyful mindset. Though it's coming out in April, there’s no doubt this will be the song of the summer.

Lizzo’s new album is set to be performed on her world tour.

If you need a bigger Lizzo fix before the album drops, her new Amazon PrimeTV series, Watch Out for the Big Grrrls, comes out tomorrow, Friday, March 25! The show details her journey in search of talented women to join her on her upcoming world tour. The show follows the familiar reality TV/contest format, and is set to tackle self-love, performance, and competition. Ultimately, the victors will go on to perform behind a global superstar.

Her new single, “About Damn Time,” is out on April 14th, and you can pre-save it here.

Tags: lizzo , watch out for the big grrrls , about damn time , Gabrielle Union , LizzosBigGrrrls
Support Feminist Media!
During these troubling political times, independent feminist media is more vital than ever. If our bold, uncensored reporting on women’s issues is important to you, please consider making a donation of $5, $25, $50, or whatever you can afford, to protect and sustain BUST.com.
Thanks so much—we can’t spell BUST without U.