Bitch, The Legendary Queer Music Icon Is Back With New Album “Bitchcraft” After a 9 Year Hiatus 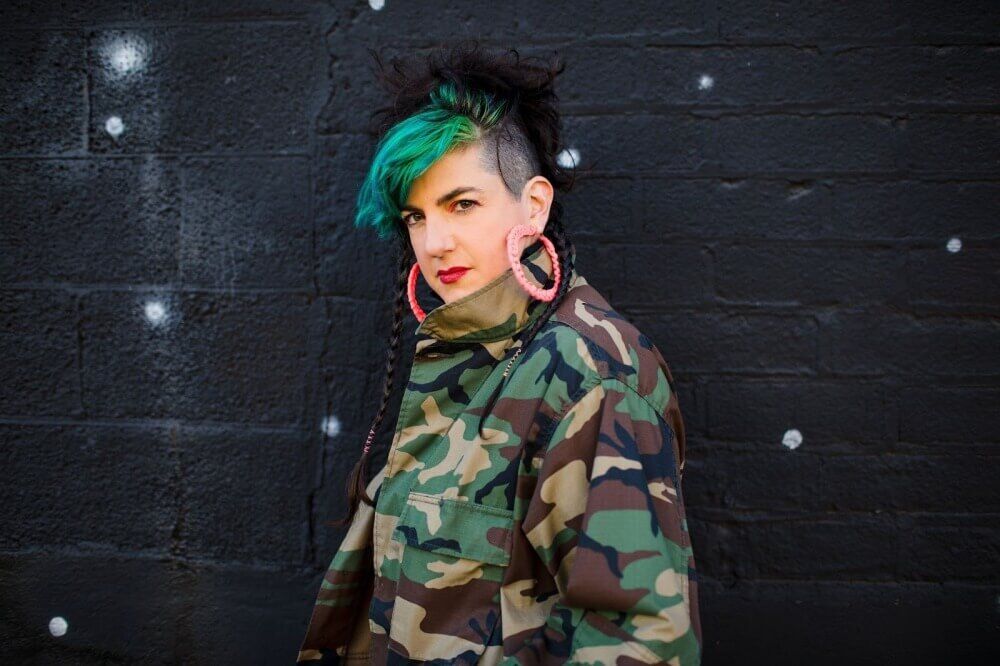 As a lover of both queer musicians and female rockers and badass music makers, Bitch is a name and face I’ve seen since my #babydyke days, strolling used record stores after school. So when I was told she had new music coming, featuring them, was a no-brainer. “I’ve changed my pronouns to she and they, just the other day,” Bitch declares excitedly, almost as soon as they enter our Zoom room. Sporting a warm and inviting smile, the artist known as Bitch has on a super cute sleeveless jean-jacket with frilly, puffed out, hot-pink lace sleeves, and Black, laced gloves. Between her effervescent style and, and the violin and synth-heavy music they’re known for, Bitch sure is giving new meaning to the word.

The multi-talented artist is back with Bitchcraft, a decidedly more pop sounding record that takes on politics, heartbreak, and what it means to exist in the world as a woman. Written after a move from NYC, her home of 15 years to a cabin in the woods, lead single, “Hello Meadow,” a psychedelic song about capitalism’s affect on mother nature, features electric violins, bird-like synths, and an even more colorful music video. Bitch caught up with BUST to speak about her new album, her love of electric violin, and capitalism's negative affect on Mother Nature.

BUST Magazine: So, can I ask, what’s behind the decision to add “they” to your pronouns?

Bitch: I feel like as a fem, I'm never offended being called she or her, but as a fem identifying queer, I have always been, outside the gender norms. It has been kind of my thing to be very-not the lady my mother raised me to be, basically. I have been embracing lately, realizing, ‘oh I am definitely gender non-conforming,’ even though I'm fem.

BM: Tell us a little bit about your new album, Bitchcraft.

B: I haven't released an album since 2013. So, I have been tinkering with it for a long time. I definitely knew that I wanted it to be very violin-centric because it's my oldest, earliest voice. I have been playing violin since I was four, so I knew that I wanted her to be front and center. And I have been moving musically to a pop direction. Having this space to not put pressure on myself to release anything right away, right after I put out my last album, which I had been on this cycle of every two years releasing an album. I was able to think really big, and kind of sonically. It's sonically the biggest think I have ever made. And I wanted to be the biggest version of myself. I have been referring to it as poet-pop because I am a poet as well, and I feel like I was able to embrace a pop structure, and then still have my obtuse-arty poetry worked in there. 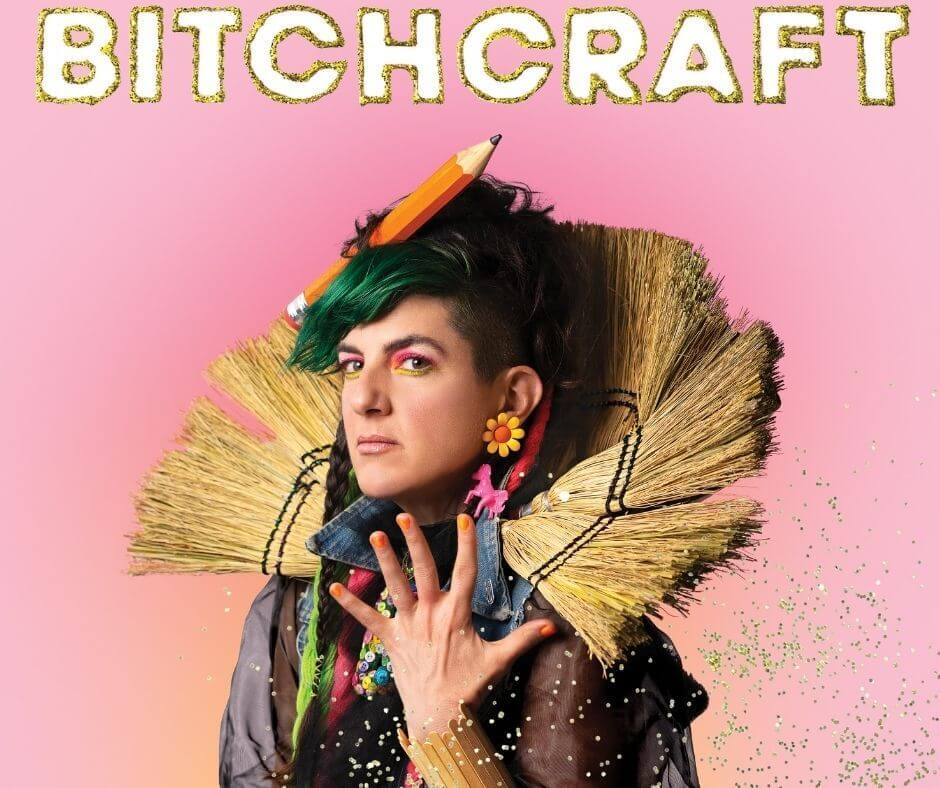 BM: How has this shift to a more pop sound come about? Have you always loved the genre?

B: Not really. You know in certain ways. There are certain artists- Robyn, Bjork, that've been part of my sonic landscape. I think it's been a process of allowing myself to be part of a more mainstream dialogue. Do you know what I mean? Like something that's more relatable for my nieces and nephews. I used to have a little bit of snobbishness about participating in that world. And, lately I have just been really embracing it and loving some of the stuff that's out there now, and realizing that I could be part of it, not closing myself down from it.

As a child of the 80’s, I was raised on this very synth-heavy stuff, so, I feel like there is something about this album that's going back to my youngest self in a way. Like with violin being such an early voice for me, and then having this heavy, big synthy-ness, it’s all part of honoring that.

BM: At what age did you start playing the violin?

B: I started at four, I saw it on Sesame Street, and just became completely obsessed and started campaigning with my parents to let me play one, and thankfully, they got me violin lessons. Of course, they put me in classical music, which I am very lucky that I have that training. I did that all the way through high school, but then, it's also very restrictive and you are playing the music of dead white men, it's not very encouraging of you putting your own spin on things. That's what I'll say.

And you know, going back to your other question about the like, the bigness of the pop sounds and the synths and stuff, I think, as a violinist, the way I hear my violin is so loud, because it's right here. And, at some point, years ago I started playing electric violin, which is really fun because you can add all these different sounds and stuff. But then, the sound is coming from over there, you are not getting this overwhelming loud sound, and there is something about the synth, and the bigness of just the big bass. Once I realized I could be making music like that, I was like wonderful, "Yes please turn it up!” 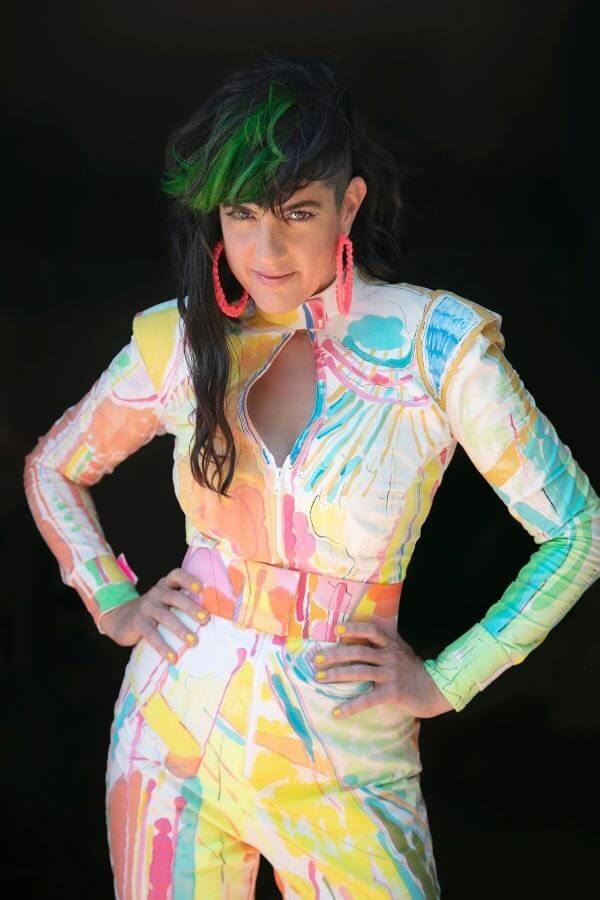 BM: What does the name Bitchcraft mean to you?

B: A. It references witchcraft. And I love it because it references a craft that I have been working on for 20 years at this point. Well, more if you consider my violin. So, I kind of like the double entendre of it. And, I have always very much been into anything kind of witchy. I couldn’t believe I had never thought of it before.

B: Yes, my friend Faith Solloway named it. And I was like ‘God, what am I gonna name the album, I just wish I could think,’ and then they just go ‘Bitchcraft.’  And I was like ‘Oh my god, that's it.’ You know, I have this symbol of the broom that I have been using in all the videos, and I'm wearing a broom on the cover. The broom to me, I think feeds that whole thing. I have this bedazzled, sparkly broom, that my friend helped me make, that I put on the stage every time I play. She appears on all my videos, and I think of her as a totem.

It's a symbol of witchcraft, but also, women's work.

And like, domestic labor, and how women's work is always free. Which is classic for patriarchy to exist.

BM: What themes do you touch on in this album?

B: Capitalism. How we treat Mother Earth. If Mother Earth was a man, would we be better to her? And of course, there is a healthy dose of plain old, human heartbreak. Which, to me, with climate change, and capitalism destroying our world, feels like the heartbreak is personal and more global.

B: It's basically about capitalism vs Mother Nature. I wrote it when I left New York, after I had lived there for fifteen years, and I went to a log cabin, in the middle of nowhere. And I kind of wrote that phrase, "Hello Meadow!" It’s about what capitalism has created, what urban environments have become, and how nature only seems available for privileged people. It's about that battle and how, if privileged people are the only people in ten years who have access to nature, they are willing to protect that for themselves, but not for everybody else. It's definitely about patriarchy, capitalism, and then it's kind of like a prayer for Mother Nature, to win.

BM: So, when the pandemic hit, how did that affect your artistic process?

B: You know, I have to say, it's interesting. I had finished three of the songs by the time the pandemic hit and Kill Rock Stars came to me. They heard one of them, and they were like ‘We want you to make this whole album.’ And that was before the pandemic, and I think it was a blessing for me, because all of the sudden it forced me to really, that's all I had to focus. I wasn’t running around, doing my life, trying to do this and that, and it kind of simplified everything and cut out all the noise. So, it was very good for me, because it gave me time and space to finish the record. And I had these elders, who had this live sound company who's whole thing was shut down, so they were like "go to our house", they set up the studio for me, and just kind of gave me this world to work in. I felt very lucky.

BM: Before that, had you been procrastinating or just taking your time?

B: Good question. I think getting Kill Rock Stars coming to me and asking me to finish the record, gave me a jolt of self-esteem that I needed, like a permission thing.

BM: What’s your favorite track on the album?

B: Right now, it’s “Pages.” I go through phases where I fall in love and out of love with my own songs. Not out of love, but I get excited about the new things. And "Pages" was a really interesting process for me because I was working with a kind of little coven of advisers on the album. A few people that I trust, and I was bouncing ideas off of. And one of them was God-des, and she has always really been wanting me to go in this more pop direction. She was kind of riding me about that song, and basically asked me, begged me, forced me, to re-write verses. And really, pushed me to clarify what I was saying. This song started as a very esoteric poem. I don't normally write like that., but I do also respond well to assignments. I love a writing assignment! She had this vision for the song, and I was like ‘Come on, it's good right now, how it is,’ because I have always been a little bit, Dadaist about my songwriting. I am not a huge editor. This album I really understood the power of editing and fine tuning. And that song, I feel like, is a result of that. And now when I sing it I’m like "God, I'm so glad she pushed me.’ Because it just so simple and clear now, lyrically. Whereas before, it really wasn't.

BM: So now that the Bitch is back, what’s next for you?

B: I’m doing residencies in LA and New York for the album release and I’m also working on a play. Right now I'm thinking of it as Bitchcraft the play.

B: Yes, I'm really into it. I did some shows with The Indigo Girls and I've been kind of adding theatrical elements to my shows, which has been feeling really good.

Bitchcraft is on sale now.