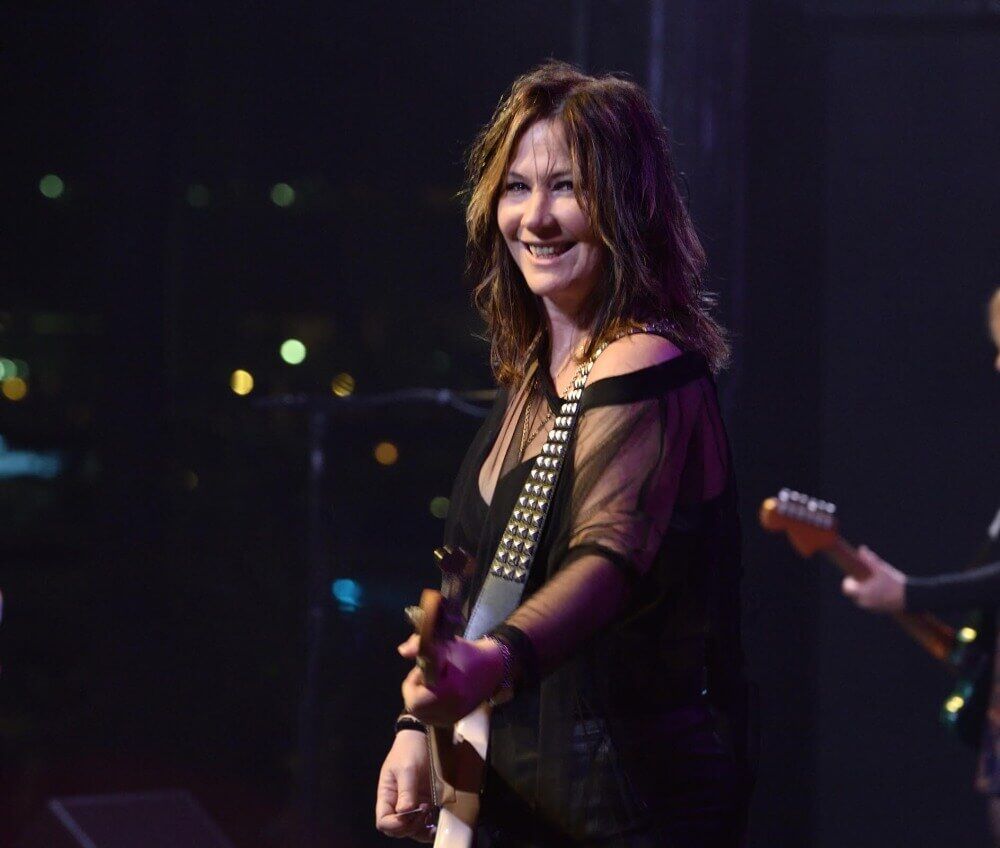 “It split the ground right open,” the Go-Go’s bassist recalled in her 2020 memoir, All I Ever Wanted: A Rock 'n; Roll Memoir. “Seeing [Quatro] doing what I had seen only men do changed everything. From that moment, I had one goal: to be in a kick ass band with a gang of like-minded girls and claim the life I wanted for myself.”

With help from her bandmates Belinda Carlisle (lead vocals) Jane Wiedlin (guitar and backing vocals) Charlotte Caffey (lead guitar, keys) and Gina Schock (drums), Valentine went on to do just that. Over their 43-year career, The Go-Go's have sold over seven million records worldwide and are poised to be inducted into the Rock and Roll Hall of Fame in Cleveland, Ohio this Saturday, Oct. 30 alongside 2021 inductees Tina Turner and Carole King, The Foo Fighters, and others.

Chatting with BUST via Zoom last month, Valentine exuded a sense of confidence, humor, and buoyant excitement. Backed by a wall of guitars in her Austin home, she acknowledged the hard road to glory. Spoiler alert: The life of a Go-Go isn’t all fun, games and pretending to waterski in a tutu a la their iconic “Vacation” video.

“The Go-Go's are a fun band, but there is also so much else there: The hard work; the songs themselves. I still don't think the music gets talked about that much,” Valentine said. “We have a handful of hits that are still just as enjoyable and easy to hear and don't sound dated and resonate with young people today as they did 40 years ago. I think that's really remarkable.”

Formed in Los Angeles in 1978, the quintet cut their teeth in punk clubs before catching the attention of I.R.S. Records. With the release of their 1981 debut album, Beauty and the Beat, they earned the title of first all-female band to write and perform their own material to soar to number 1 on the Billboard Album Chart. As the first multi-platinum-selling, all-female band to play their own instruments, write their own songs and top the album charts at number 1, the Go-Go's can accurately call themselves the most successful female rock band of all time.

Although sexism ran rampant in the music industry, Valentine is quick to add that plenty of guys, including longtime friend and Blondie drummer, Clem Burke, helped support and lift her and the band up.

“When you are sincere and authentic in your passion for music, like recognizes like. Whether you’re a boy or a girl, you’re going to be recognized for your authentic drive and passion,” she said.

Now, more than ever, folks might be ready to take on a clearer view of the band so synonymous for perky New Wave haircuts. Valentine credits the 2020 band documentary, The Go-Go's, for helping smash their previously squeaky clean image.

“Once we got nominated [for The Rock & Roll Hall of Fame] and the documentary came out, and people wrote that we were a real band that came from the streets and were self-made, that’s when the narrative changed,” Valentine said. “It changed once that became the story, instead of 'Aren't they cute and bubbly?' Aren't they the girl next door?'”

The documentary also helped heal some old grudges between the bandmates, Valentine added.

“It's like any relationship. There's five of us. Five people, five interactions, five dynamics and decades of being together,” Valentine said. “It can be hard arriving at consensus. Anything from arriving to a t-shirt design for merch, a setlist--it can be hard. With maturity, I’ve learned if I'm not getting my way, that’s OK.”

Valentine is no stranger to personal growth, as readers of her 2020 memoir already know. Undergoing an abortion at age of 12, getting hooked on booze as a youth and struggling with a single mom who was more likely to party with her daughter than create structure and safety, Valentine could have ended up in a much darker place. 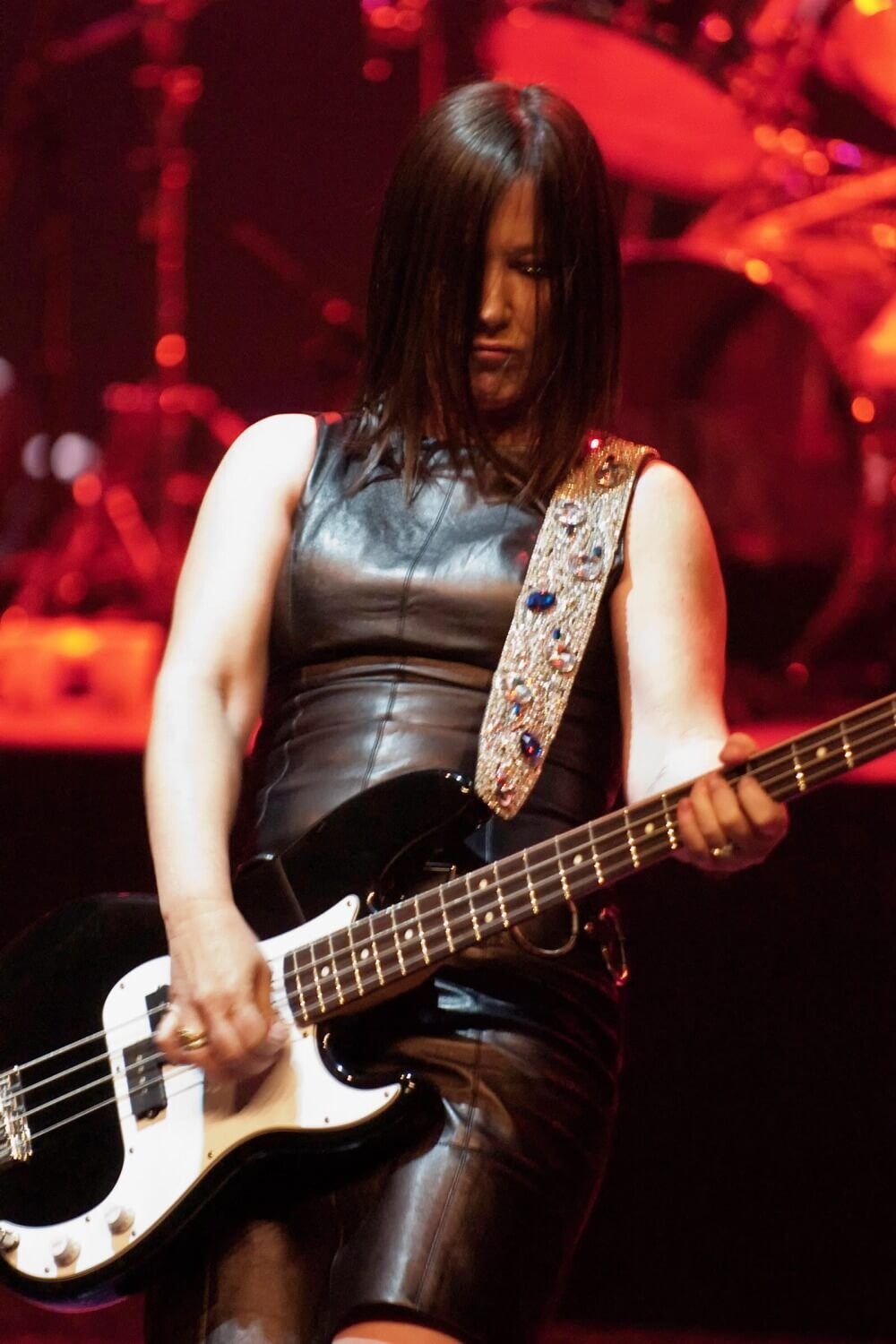 “I never set out to tell the Go-Go’s story; that’s not my entire story,” Valentine said. “The one thing I’m most grateful for is how [my mom] consistently emphasized intellect over looks. She never depended on a man in her life, so I have grown up without the driving need to always be in a relationship. I’m very comfortable on my own.”

Now, Valentine is grateful for the chance to share these hard-won lessons with her own college-aged daughter. She credits her growth to her 1989 decision to live sober from drugs and alcohol.

“I view sobriety as the foundation for everything good in my life: From talking to you today, my book, to my daughter, to my home, to my standing in the Go-Go's—to being fired from the Go-Go's to being asked back with grace and dignity,” Valentine said.” It gave me the tools to deal with life and appreciate the blessings of life as well as the difficult things and people.”

When it comes to advice she’d give younger artists, Valentine said forget the praise and the criticism:

“Anybody who creates wants an audience, but you don’t always get it. The sooner you realize you can put so much work into something and feel really good about it, even if people don’t validate it, the better.”

“I had a very single minded focus: to be in a cool band and to make it,” Valentine said. “Maybe that single-minded focus had something to do with my success, but looking back, I feel I limited myself in many ways. I feel I didn’t [branch out] until my 60s, but I’m branched out now and it feels good.”

To that end, Valentine’s nonprofit, She Factory, offers up a series of programs showcasing Austin’s female creative pool through music-centered events and fundraisers. Proceeds benefit worthy women's causes like Safe Alliance, a group that provides hope and healing to those impacted by domestic violence and sexual assault. A 2022 event is in the works, Covid-19 pending.

What’s next? Valentine said she plans to pen a second book interwoven with original music and will continue to play guitar in her Austin-based group The BlueBonnets. Recently, she re-recorded and released her song “We Don’t Get Along,” originally recorded by her early band The Textones as well as The Go-Go’s.

Despite honing her own identity, Valentine said she’ll always belong to the raucous girl gang known as The Go-Go’s. She recalled how her bandmates excitedly texted, FaceTimed and Zoomed each other after learning of the Rock and Roll Hall of Fame induction news.

“Lately a lot of the calls and interactions going on are about who's wearing what [to the Rock and Roll Hall of Fame induction]! We're still girls...punk rock girls...at heart,” she said with a laugh.

A recent Go-Go’s T-shirt design features an image of the band alongside the words “It’s About F#%*ing time.” On the eve of their  Rock & Roll Hall of Fame induction, it’s hard not to think of the band’s 2020 single “Club Zero” as a foreshadowing of the win to come: “They may have control/But we're not scared/Zero fucks given/Wake up, can't you see/Heads up, we're the new MVP's Of the twenty-first century.”

When asked about the band's upcoming Roll & Roll Hall of Fame performance and U.S./European tour dates, Valentine considered it all a cherry on top. She said she especially loves seeing kids in the audience, bringing it full circle to the moment she first saw her own idol rocking out.

“I feel really grateful and blessed to be able to run on stage and have a big crowd that is thrilled to see you and knows your songs and knows the words to your songs,” she said. Not every musician gets to experience that.”- Hayley Cain

Tags: kathy valentine , the go-go's , rock and roll hall of fame induction , our lips are sealed , god bless the go-go's , beauty and the beat
Support Feminist Media!
During these troubling political times, independent feminist media is more vital than ever. If our bold, uncensored reporting on women’s issues is important to you, please consider making a donation of $5, $25, $50, or whatever you can afford, to protect and sustain BUST.com.
Thanks so much—we can’t spell BUST without U.