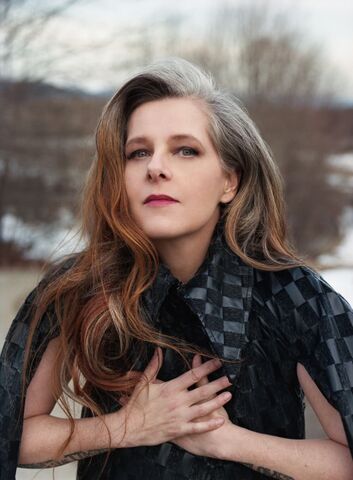 Like many people stuck at home during the pandemic, Neko Case had to find a new way to occupy herself. Unable to tour and still dealing with the aftermath of the 2017 fire that burned down her Vermont home, the singer/songwriter turned to a friend who’s never let her down: nature. “I write about it all the time in my journal,” she explains. “I think a lot about nature when I’m sitting around for hours outside a club and there are plants growing through the pavement...and I think a lot about people losing their connections with nature. Because we’re animals, right? We need that connection just like we need the connection with each other.

She eventually compiled some of her journal musings and in June, launched Entering The Lung, a Substack newsletter where fans and fellow nature lovers can read her thoughts on black flies, environmental justice, and everything in between. Here, Case discusses her connection with the forest, her thoughts on heading out on tour, and what her next musical moves might be.

BUST: Your newsletter is called Entering The Lung in reference to the forest. How did you settle on that title?

Well, it’s more like a liver, really. It cleans all the toxins out. It just felt like the forest was giving me super air—pure oxygen. If I’m feeling tense or uptight, I go for a walk and I come back and I reset. It’s a super simple thing, but it’s such a necessary, nontoxic way to get rid of daily things that don’t matter or just regroup.

How are you feeling about getting back on the road after over a year of not being able to tour?

I’m pretty excited about it. I’m also feeling something a lot of people talk about, where they say, “Oh, I’m so excited to go out, but I’ve just figured out this thing where I’m isolated and I kinda like it.” People have a fear of losing that, too, which is totally valid and interesting. We did a couple of socially distanced shows last year and it was really awesome. So, the full-body contact, cage match, wrestle out with the whole audience is gonna be sweet.

Are you more in the camp of “the pandemic fried my brain,” or did you find it to be good for your creativity?

It really fried my brain. I thought completely incorrectly that the pandemic might be an opening of space for me to work on a bunch of projects that I’ve wanted to work on. But I ended up having to take on a lot of work to try and get through the pandemic. Don’t get me wrong, none of the jobs were anything that I didn’t want to do. I’ve just never worked so hard in my life. I feel pretty exhausted from it, but I also feel very fulfilled and very excited for what they may become.

Might any of those projects be a new album?

I have a couple of songs, but mostly I’m focusing on the writing and then doing a little bit of touring to make up for shows that were canceled. It’s kind of a creative regrouping that’s going on right now. I think the physical expression of live performance is gonna stretch me out in sort of a yoga or physical therapy way that I really need, rather than being balled up in my pajamas, on the couch at 3 a.m. trying to use my highlighter on 10 different pieces of paper. I’ve been in the super grind for a while, and I need a little bit of breathing.  –Eliza C. Thompson