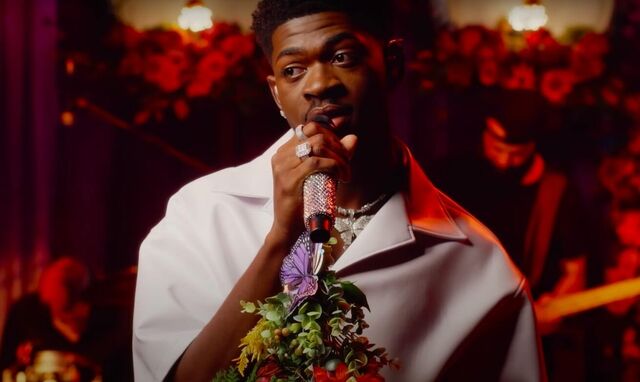 In celebration of his debut album, Montero, Lil Nas took over BBC Radio 1’s Live Lounge with a small band and a flower-adorned mic stand to work some country magic. His cover of “Jolene” invokes the same Western profundity of his first hit, “Old Town Road,” but with a newfound sense of depth and self-awareness.

As he sings “Jolene”’s lyrical tale of a scorned woman, Lil Nas infuses the song with the struggles inherent to his identity as a gay Black man. The lyric “I'm begging of you please don't take my man” is given powerful new meaning in the context of Lil Nas’ own experiences with homophobia and marginalization.

Lil Nas’ version of the song describes a love triangle between himself, a male partner, and a straight woman. Lyrics like, “And I can easily understand/How you could easily take my man” become imbued with themes of queer yearning and the harmful impact of heterosexual normativity. It also doesn’t hurt that Lil Nas’ trademark baritone turns the song into the kind of rich, velvety lullabye that cements in your brain for days.

After coming out in June 2019, Lil Nas X began incorporating his gay identity into his music, conveying his journey of self-acceptance within the LGBTQA+ community. Lil Nas’ latest songs have explored everything from homosexuality as a “sin”  to sexual anxiety in prisons, redefining what it means to be queer in America today.

Montero is now available just about everywhere and has already been hailed as “pop-rap at its proudest, biggest and best.” Ever the fashion icon, Lil Nas has also collaborated with designer Jean Paul Gaultier on a limited-edition mesh top that is available for pre-order now.

Now, do your ears a favor and check out Lil Nas X’s cover of “Jolene” right here:

Lil Nas X Ignites Satanic Panic with his Haunted, Celestial Music Video for “Montero (Call Me By Your Name)”

Tags: Lil Nas X , Montero , Jolene , Dolly Parton , queer , LGBTQA+ , jolene cover.
Support Feminist Media!
During these troubling political times, independent feminist media is more vital than ever. If our bold, uncensored reporting on women’s issues is important to you, please consider making a donation of $5, $25, $50, or whatever you can afford, to protect and sustain BUST.com.
Thanks so much—we can’t spell BUST without U.