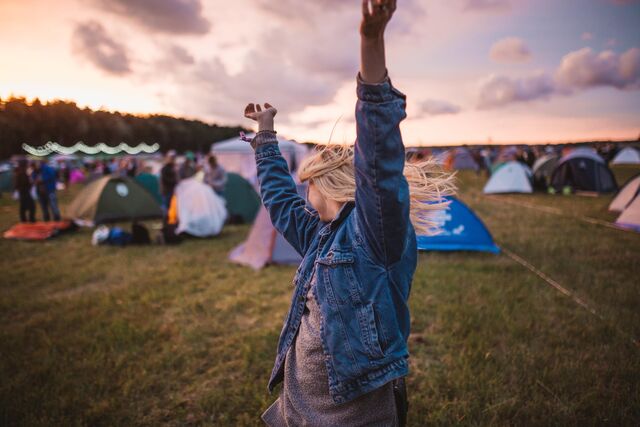 After a year of cancelled music festivals and travel, musicians and attendees of the Bottlerock Napa Valley Music Festival were thrilled to drink wine together, dance together and enjoy a little bit of normalcy for three days from Sept 3-5.  This was the first music festival/live music event I personally attended since before the pandemic and I was not the only one.

You don’t realize how much you may take something for granted until you lose it.

With a packed lineup including Megan Thee Stallion, Miley Cyrus, Guns and Roses, G-Eazy, Jack Harlow, Jessie Reyez and many more taking to the stage, many of us, including myself, were ready to drink wine and do some hot girl shit.

One sentiment was shared by all artists and attendees, music festivals have been missed and we are happy they are back.

“It’s really exciting. I’m happy I feel, I mean with all the measures that the city is taking I feel safe. I think that everybody here is either vaccinated or has a negative COVID test. So it’s really refreshing and it feels nice. I mean we all need this,” Owner of Foley Johnson Winery Giovanni Verdejo told BUST.

But attending a live-music festival mid pandemic means extra measures had to be taken to ensure the health and safety of attendees.

All attendees were required to provide proof of a COVID-19 vaccine (my photographer and I are fully vaccinated) or a negative COVID test taken within 72 hours of each day a person attended the festival to enter. Rapid testing was also available onsite.

But while precautions were taken, some were still a little worried of the fact that they could get sick from attending the festival.

“It’s kinda scary if I think about it. I know I could get sick but I am fully vaccinated,” attendee Jojo Ryan a Chico State college student said. “Being back here is like I have no words. It’s so great. I’ve missed music festivals so much.”

Last summer, like most of 2020, Bottlerock Napa Valley was cancelled. Usually, Bottlerock takes place earlier in the summer around Memorial Day, but because of the pandemic the festival took place in early September.

According to a report from the Recording Industry Association of America pre-pandemic the music industry created $170 billion in value annually to the U.S. GDP and supported 2.47 million jobs across a wide range of professions, and accounts for $9.08 billion in export sales.

Those numbers were severely decimated by the cancellation of live musical performances, forcing many music venues to close. Since then there’s been a pivot to more online concerts and streaming platforms to make revenue.

Pollstar, a website which keeps track of live-music economic data estimated the total lost revenue for the live music industry in 2020 at more than $30 billion.

In August 2020 Live Nation, one of the biggest live event organizations in the United States reported a loss of $576.5 million.

Even though the show did go on, not all performers in the original line-up performed at Bottlerock. Performers like Stevie Nicks who was supposed to headline canceled her tour over COVID fears before the festival began and her replacement Chris Stapleton, known for his hit “Tennessee Whisky,” canceled at the last minute due to illness.

Even with last minute cancellations attendees reveled in the music. I was most excited to see Megan Thee Stallion and since my photographer and I weren’t sure if we would get pit access we tag teamed. 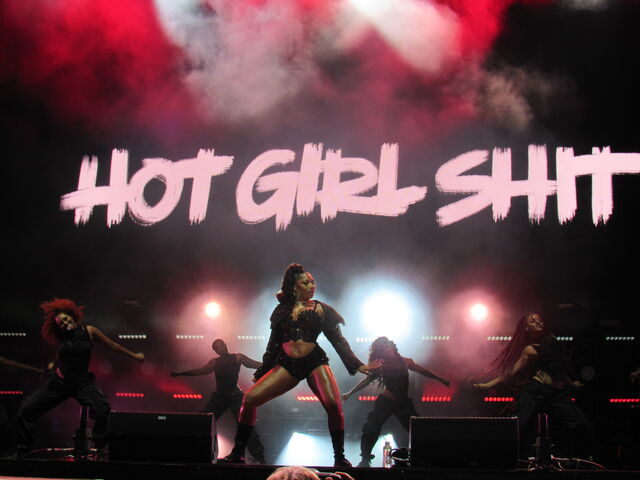 I wasn’t the only one willing to sit under the 103-degree blazing sun to see my fav. Attendees like Evelyn Tij, a Napa resident, spent 10 hours by the barricades to catch Megan Thee Stallion up close. This was the first music festival she attended since the pandemic started.

“What made me have a deeper connection for this festival was the atmosphere. I was surrounded by people who loved the music as much as me and knowing that I was going to see my favorite artist with cool people made it a surreal experience,” Tij said.

Attending a music festival with the rise of the Delta variant and talks of the state of California possibly closing again may seem daunting but many attendees that spoke to BUST said they felt safe.

Currently California has over 4 million COVID-19 cases and ICU units in hospitals are starting to reach capacity once again. In the Central San Joaquin Valley, where I live the local hospital reported it only had 14 ICU beds left.

In Napa, where the festival took place there are currently 0 ICU beds available according to the COVID-19 dashboard.

While COVID-19 has disrupted all of our lives and its looming presence threatens our physical health and economy, Bottlerock attendees said the festival was giving back something the virus has taken away: a sense of healing, community and hope.

Bottlerock didn’t offer any official onsite therapy, however, there is research that shows music and music therapy has a way of healing traumatic wounds. One recent study by the Center for Public Integrity pointed to utilizing large community gatherings as a way for communities that have undergone trauma and can’t afford therapy to come together and heal.

For me, my moment of catharsis was listening to Jessie Reyez sing. Reyez performed music from her album Before Love Came to Kill Us. 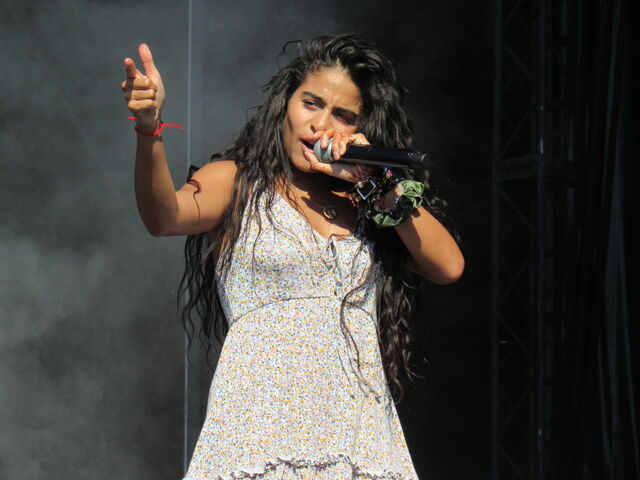 I attended Bottlerock with the intention of covering music, but the music made me face the personal traumas caused by the pandemic. And I wasn’t the only one filled with emotions and going through catharsis. Miley Cyrus and many other artists got emotional on stage as they performed. Cyrus shared with audiences that this performance was only her second live in-person performance this year. 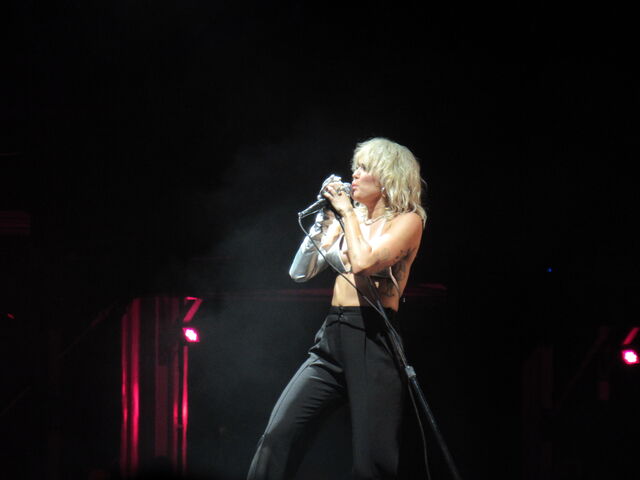 Festivals are usually a great place for audiences to discover new artists they may have never heard of before but they are also a great way for new artists to start to build a following.

BUST spoke with rising pop artist Molly Moore about her experience performing at the festival. Bottlerock was her first time performing at a music festival ever. 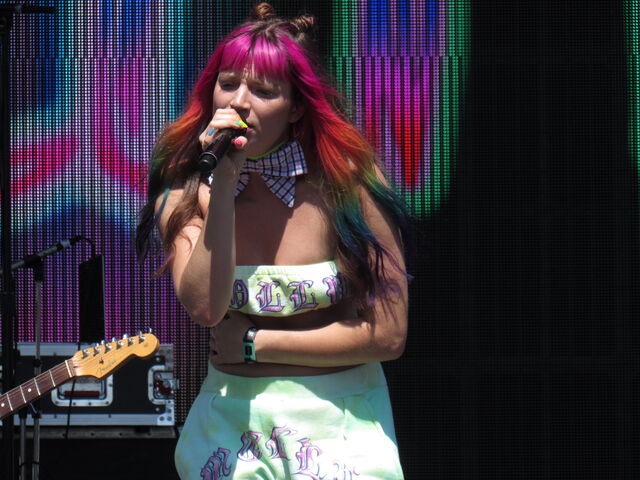 “It’s definitely scary to think about not being able to continue playing in person because it’s something I love so much and live-streaming is just not the same at all. Like I’m grateful for it. I’m so glad there is a way to connect with people still through all of this wildness that we’ve been through but live music there is just nothing like it,” Moore said.

Like many other musicians last year her opportunities to perform her new music were curbed and transferred mostly online. For the past year and change, all of Moore’s shows were done via live stream on Twitch. Although it was a relief to attend the music festival, musicians like Moore feel live-stream concerts are not going to go away.

Moore is planning on doing a live concert in LA sometime this fall but because of COVID-19 she is unsure when that will be. To ensure she was not part of the problem, Moore chose to get vaccinated against COVID. “This was a choice I had to make for myself and yeah I feel real relived now,” Moore said.

As we continue to navigate how COVID-19 has transformed the music industry and festivals, the music industry continues to make the transition back to in person festivals by taking extra precautions, including being strict about onsite testing and vaccination requirements.

Like many cities around the country, Napa requires patrons to wear a mask at indoor establishments.

It has been a few weeks since the fest and there has not been any news about an outbreak from Bottlerock. Many attendees hope that this means we can start shifting more and more back to live performances as we knew them. “I mean we all need this. We’re social animals that’s what we are and we like to socialize, we like to see people, we like to meet people. Last year was like, you know control, alt, delete. It shouldn’t even exist,” Vardejo said.

Bottlerock is expected to return to it’s earlier-in-the summer, late May schedule. Guess you know where I’ll be spending Memorial Day 2022. 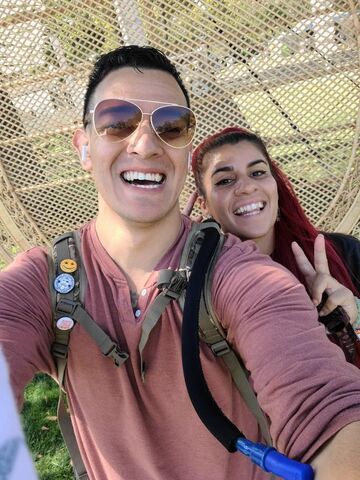 Tags: Megan thee stallion , music festival , bottlerock , Miley Cyrus , jessie reyez , Molly Moore , Music Festival , Festival , megantheestallion
Support Feminist Media!
During these troubling political times, independent feminist media is more vital than ever. If our bold, uncensored reporting on women’s issues is important to you, please consider making a donation of $5, $25, $50, or whatever you can afford, to protect and sustain BUST.com.
Thanks so much—we can’t spell BUST without U.