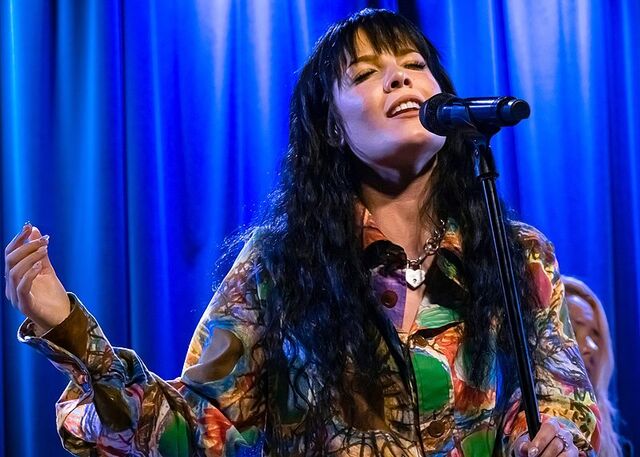 Halsey mastered dreamy indie-pop on their 2015 debut album Badlands, delivered club-ready jams on 2017’s hopeless fountain kingdom, and demonstrated a voracious musical appetite with detours into baroque pop, mainstream rock, and country on 2020’s Manic. Now, bolstered by production from Nine Inch Nails’ Trent Reznor and Atticus Ross, Halsey has conquered the murky, haunting terrain of industrial rock in an album reflecting nothing less than the horrors and desperate joys of pregnancy and childbirth on her latest release,  If I Can’t Have Love, I Want Power.

Having ecently given birth to her first child, Ender Ridley Aydin, Halsey has described the experience as harrowing:

“I think everyone who has heard me yearn for motherhood for so long would have expected me to write an album that was full of gratitude. Instead, I was like: ‘this shit is so scary and so horrifying. My body’s changing and I have no control over anything.’ Pregnancy for some women is a dream—and for some people it’s a fucking nightmare. That’s the thing that nobody else talks about.”

Appropriately, with very few exceptions, the songs on If I Can’t Have Love, I Want Power reflect and project Halsey’s sheer terror at giving up fundamental control, largely through heavily distorted, eerie instrumentations and often frantic, shrieking vocal delivery. This album is best consumed in small bites, and definitely not all at once.

It’s not just the terror of giving over ones body to pregnancy. Lyrically, Halsey connects this unique and brutal experience with existing anxieties over giving up other forms of control in their life, a theme that has lingered throughout their discography. Other specific issues that seem at play are, giving up privacy to chase dreams of musical fame, or dealing with the emotional vulnerability of falling in love. Celebrity, lover, and now parent: are these categories forms of love, or forms of power? And are they ultimately worth it, in the end? If I Can’t Have Love, I Want Power asks, but for the most part can only reply with ambivalence. And it’s perhaps that ambivalence--rather than any specific details of blood and pain--that give its most terrifying aspect.

Is what she achieved in her career worth what she’s had to give up? Album opener “The Tradition” would answer partly in the negative. The song begins as a mournful piano ballad in a minor key as Halsey spins her own isolation and deeply-felt dissatisfaction into a fable: “Oh, the loneliеst girl in town was bought for plenty a price [...] She got the life that she wanted, but now all she does is cry.” Then, in the chorus, Halsey replies, “take what you want / take what you can / ask for forgiveness / never permission” with cackling, gothic rock vocals, as if answering her own question: wipe away your tears, and get yours.

“All of this is temporary,” Halsey comforts--or warns--on “Bells of Santa Fe.” The hypnotic repetition of staccato piano in the background of this track lulls you into complacency before cutting off midline and continuing to the next track, the absolutely furious “Easier Than Lying,” a track that resembles the work of Evanescence. Against static, screams, and audio feedback-laced instrumentation, Halsey alternately sings and growls their way through a blistering accusation of betrayal--but is it a lover’s betrayal, the betrayal of a fickle public, or another kind of betrayal entirely? “Losing you is easier than lying to myself that you love me,” they sing: If I Can’t Have Love, I Want Power.

Album highlight “You asked for this” is perhaps the pinnacle of the ambivalence of the album, this sense of what’s done is done, make the best of what you’ve done with your life. Like “The Tradition,” it takes the form of a rhetorical back-and-forth between chorus and verse, in which Halsey alludes to a sense of dissatisfaction with the kind of love she has experienced in both romantic and fame-related settings. And as in “The Tradition,” there is no looking back in regret; there’s only moving forward and taking what control and power back that you can.

Several tracks look back through Halsey’s discography, offering throwbacks to earlier Halsey motifs. “Lillith,” with its syncopated beats and sparse instrumentation, recalls numerous tracks on Manic, hopeless fountain kingdom, and Badlands in which Halsey opines on their inability to have functioning, healthy relationships. “Whispers” goes beyond allusion and description, illustrating the new mom’s struggles with mental illness and, specifically, the reality of intrusive thoughts that break up the verses in an appropriately disruptive way. “1129” calls to mind Badlands’ “Control” in its use of Halsey’s higher register in a particularly frantic way.

Similarly, the catchy and fast-paced album highlight “honey” features what has become, at this point, classic Halsey—a recollection of a fling with a girl who captivated them and put them through the wringer: “She was sweet like honey / But all I can taste is the blood in my mouth / And the bitterness in goodbyе / Drippin’ like honey / Down the back of my throat and on thе front of my mind.” Like hopeless fountain kingdom’s “Bad at Love,” “Girl is a Gun” places Halsey on the other side of the relationship: they are the chaotic one, the lover that will be the lingering regret: “This girl is a gun, before you know it, it’s done / And you’ll be wishin’ that you crossed your fingers.”

It’s only on slower, acoustic tracks like “Darling” and “Ya’aburnee” that Halsey reveals the kind of love that she feels she can cherish: the very specific love of her son and of her boyfriend Alev Aydin, and the family they’ve made. “Darling,” a lullaby featuring guitar from Lindsey Buckingham (formerly of Fleetwood Mac) features Halsey reflecting on her own childhood and promising that her baby will have a happier home. The track has some of the best lyrical imagery on the album“until it’s time to see the light / I’ll make my own with you each night / I’ll kidnap all the stars and I will keep them in your eyes / I’ll wrap them up in velvet twine,” and its chorus features the plain-spoken but deeply affecting line “only you have shown me how to love bein’ alive.” For someone who has written copious songs about love and relationships, it’s genuinely touching to know that Halsey has found a sense of purpose and peace through the pain and trauma of pregnancy and childbirth.

“Ya’aburnee” closes the album with a similar sentiment, albeit tinged with a hint of the darkness on the rest of If I Can’t Have Love, I Want Power. “Ya’burnee” roughly translates to “you bury me” in Arabic, and expresses the hope that one’s loved one will outlive them (and therefore bury them once they pass). Against spare production and a gentle thrumming beat, Halsey sings of the overwhelming and all-consuming love they have for their family: Halsey, Alev, and Ender. Halsey and Ender grace the cover of the album, looking like a mixture of van Eyck and Jean Fouquet Madonnas—an art historian’s dream, and bursting to the seams with ideas to unpack. Mary watched her son die young and in pain before her eyes; in “Ya’aburnee,” Halsey promises Ender: “darling, you will bury me / Before I bury you.”

It’s through listening to the lyrics of “You asked for this” and “Easier Than Lying” that a distinct pattern begins to emerge: for Halsey, romantic love and fame haven’t always been worth what she’s given up to attain them. If Halsey can’t have the love they’ve sung about in previous albums, well, they don’t need it. They’ll take their power—its own form of love—and make something just as satisfying for themselves. And what kind of love has been worth it, in the end? “Darling” and “Ya’aburnee” answer: the family I have made.