After 5 Years, Rapper Angel Haze is Back with a New Single, and a Whole New Perspective on Herself 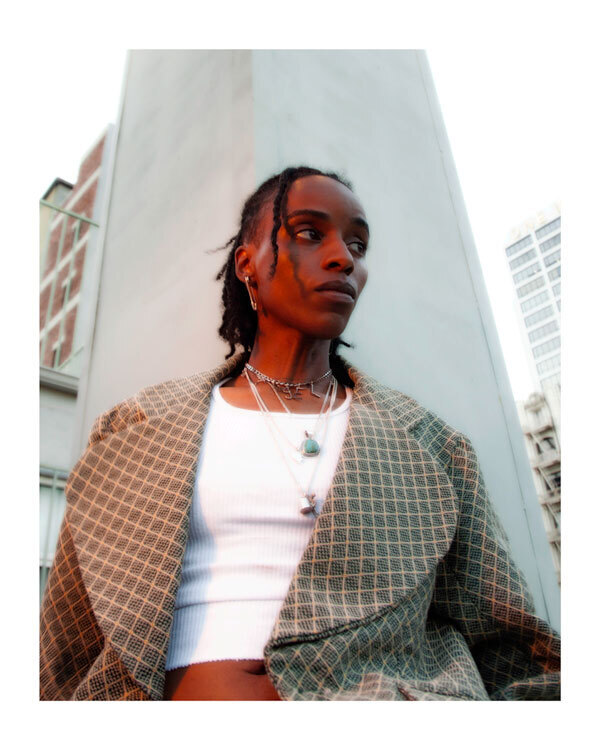 Angel Haze is the perfect interview subject — honest, open, and eager to share her thoughts and creations with the world. I start off the interview with one of the first questions I like to ask all the folk I interview: what are your pronouns? “I don't have any, I mean, you can call me anything you fucking want, I really don’t subscribe, you know what I’m saying?” Even through a ZOOM screen, the rapper’s charisma and personality are palpable.

Released independently, it’s been almost six years since Back to the Woods, the 30-year old’s second studio album came out. Since then, it seems Haze has been enjoying her time away from music and taking care of self. BUST caught up with the LA-based artist to talk painting and visual art, her spiritual and artistic journey over the last five years, the state of female rap today, and her latest single “Never Seen.” - Niesha Davis

Bust: You created the artwork for your upcoming EP, The Girl with the Gun. Have you always been into painting?

Angel Haze: So, when I started painting, I usually would paint on my walls at like every place that I had. I was leaving one spot in downtown L.A., and I wanted to take a piece of the wall with me. It became where it was like, I can't do this on walls because I wanted my art to live with me, so I transferred to canvas. It was pretty much after my dad passed away that I got into everything. I think painting got me through the things I couldn’t say. It's an expressive medium that like, just pulls more out of me. With music, I'm already so revealing, and I see so much stuff because I look at it as a catharsis for me and for the way that I get through things. But painting, I can say things I could never say in music. Like, for instance, this uterus painting I'm doing now. I didn't get my period for a long time in my life — like maybe a year or so. I've been getting it so fucking crazy — it’s like being in a foreigner's body, I cry more about it than I want to admit. I feel like I don't belong in myself. And the painting is a little girl ripping out the thing that makes her bleed, the thing that makes her a woman, the things that make her feel like she's not herself in her body or whatever. The ways that I can speak to and through myself in painting is crazy.

B: How do you think the rap game has changed for women and female-presenting people in the last six years?

AH: It's incredibly different. Everywhere I look, there's someone that looks like me, that's a girl that's like, you know, out there doing their shit. I love that because when I came out, it was just me, Nicki Minaj, Iggy Azalea, and Azealia Banks. Even if you look at that array, that spectrum of rappers, it's just like: random, random, random, random. And now there's a niche for every single female rap type and I think that's dope. Like I love Rico Nasty, I think she's incredible. I'm like, shit, I wish I grew up with someone like that to look up to, because, again, I would be way less inundated when it comes to expressing myself.

I think it’s an incredibly important time for music because all of it is so necessary. There are people waiting to hear what everyone has to say. I don't think there's has been anyone, I will say, from the male side of things, that has been phenomenal in the past five years — aside from Drake. Females are really taking over and that's what I like to see. It's like, “you guys are not interesting anymore.” I'm excited because this is the arena I've been waiting for. This is the arena that I wanted to step into originally where it's like, I will eat you for breakfast, lunch, and dinner. And it's not a problem for me at all, but there was nothing like that out there when I came out. So, my hunger was met with ‘she's too cocky.’ I was doing shit where like people would be like, 'Yo, she's trying to outdo the boys.' And I'm like, oh, that's just going to get done for sure! I'm excited. I feel like it's a good time to be a musician, and a good time to come back.

B: In the past you’ve expressed issues with anxiety, particularly with the album creating process. How are you combating that this time around?

AH: My first release wasn't as ideal as I wanted it to be… I put out my first album on a pretty huge label, I was at Republic, and it just wasn’t what I thought it was going to be. At the end of the day, they give me a lot of anxiety. I went through so much shit in regard to expression and the formulaic process of that. I felt crippling anxiety for a long time around music, around the honesty of it, around the release of it, around so many different things.

I didn't want people to see me fully, I only wanted them to see me in pieces. So recently I've been into this Gestalt psychology thing, and just Gestalt psychology basically deals with the fact that something is better in whole than it is ever in parts. And like for me, I don't ever want to give myself in parts again.

B: Tell us about The Girl with the Gun.

AH: I created a character for myself. I was going through a lot of different things. I had gone on tour and made about 600,000 dollars by myself, no promo, no anything. I came back to America and someone very close to me had stolen about 450,000 dollars of that. I lost my fucking mind. I worked, like I didn't have a day off. When I tell you I was on tour for, like maybe like 83-90 days and I had one fucking day to myself. I did so much shit. I lost my mind. There's been so many times in this in this industry where I've lost myself and I've had to grovel at my own feet for re-entrance into my body. My dad committed suicide, I had an album, I Talk To God, that I was finishing it up and my dad was just like ‘peace out.’ It was a crazy time for me.

I got so tired of feeling like a victim to my own life. I don't think that there's anything worse than that feeling. I went home just I sat with myself. I would just go in the closet and cry and pray and talk to God and ask him to just give me something different, like very, very different, something that like I've never felt before, a different hunger, a different whatever. And then I created The Girl with a Gun. I don't feel anger anymore: I feel power. I don't feel fear. I don't feel doubt. I don't feel anything that has to do with those oppressive, more lower energy frequency emotions. I'm like, wow, this is what it feels like to come out on top of your pain, on top of yourself, on top of your former mentalities. Like this is the girl with the gun, the girl with the gun killed everything that came for her. And I'll do it again if I have to.

B: What are the themes of this EP?

AH: Love, anger, just energy really. I think it has to do with just a resurgence of self. I don't have any qualms about my life. Like God is really taking care of me. I could be dead. I could have been dead many, many times. And I just feel grateful that I have this thing in me that won't stop reaching and won't stop wanting to give what I was put here to give. The album starts with a gunshot and ends with a gunshot. 'Girl with the gun' is the first one and 'bullet' is the last one.

B: I listened to “Never Seen,” and it sounds a lot more chill and vibey than your previous releases. Do you agree with that, or no?

I do. I picked out certain elements that I wanted to give on this EP. I dropped something in the beginning of the year that I written a few years ago, and it was the first song that I produced myself called "Weight.” This is a way you’ve never seen me — not give a fuck, identified with myself this deeply.

B: How are you able to be so open and vulnerable in your music?

Niesha is a writer, diversity editor, and traveler. Her bylines include Glamour, Mic.com, Business Insider, Women's Health, The Huffington Post, and many other publications. She is the digital editor for Bust. Keep up with her at brownandabroad.com
Tags: angel haze , rapper angel haze , female rappers , gender non-conforming rappers , the girl with the gun ep.
Support Feminist Media!
During these troubling political times, independent feminist media is more vital than ever. If our bold, uncensored reporting on women’s issues is important to you, please consider making a donation of $5, $25, $50, or whatever you can afford, to protect and sustain BUST.com.
Thanks so much—we can’t spell BUST without U.