Amyl and the Sniffers' Amy Taylor on Surviving Lockdown with Bandmates, and the New Album, in BUST Interview 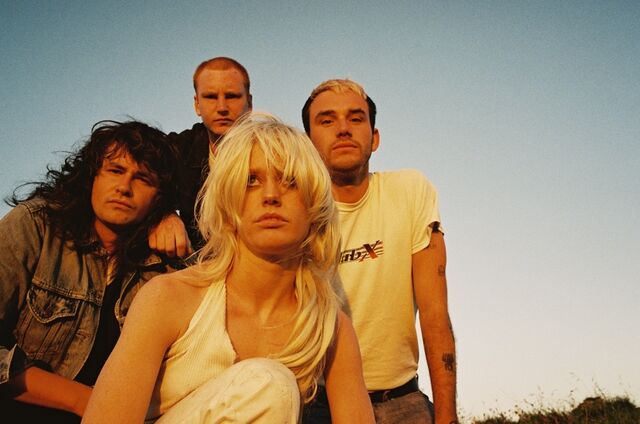 Since their debut in 2019, Amyl and the Sniffers have embodied everything that it means to be punk. The group is known for their insane live shows, outrageous style and fresh music; they are making waves in the punk scene. Their new album, Comfort to Me, out Sept. 10 is proof that nothing, not even 2020, can hold them back.

BUST sat down with Amy Taylor, the lead singer, and talked about how she found herself in the music industry, how she dealt with the lockdown, and her new album, Comfort to Me.

BUST: Growing up did you always know that you want to go into music?

A: Not really, I always liked music and live shows, and would l play around with the idea like most kids, but I never thought this is what I would do.

So how did you find yourself here?

I don't know, to be honest, it just kind of happened. I grew up in a town called Mullumbimby, but when I moved to Melbourne, I lived with people who played music. I was going to live shows pretty much five days a week and so were they. They were playing in other bands, and when I would get drunk I would rap over the band. Then we were like let's start a house band and we started the band, and then it just kind of took off from there.

So you wrote most of the album in lockdown with your bandmates, what was that lockdown like?

That was the biggest lockdown. I guess last year, we were in and out of lockdowns. I'm not sure exactly, but I think it ended up being five or six months in lockdown last year. We started writing the album at the end of 2019, which is Australian summer and there were really bad bushfires, and so we were wearing masks because of the smoke, and that was before COVID even existed. So it was pretty bizarre writing during COVID, we would just do what we could when we can. We all live together, but at the same time, we just sat around all day, because who's gonna write music all the time?

What was the dynamic like between everyone while you guys were in lockdown?

Because we've toured so much, we know each other in and out. There's nothing new to learn, so it was actually pretty chill. It was just like living with my brothers, but dynamically, I'm definitely the most energetic and annoying. So for me, it was easy because I could yell and make noise, and they can just get annoyed.

As you said earlier, the album was written during some times that were pretty tough, with the bushfires and the pandemic in Australia. How did these hardships present themselves in the album?

I think there's a certain element of cynicism and a certain element of hopefulness. But there are also certain songs, which kind of have a bit of despair in them or maybe nihilism. Because it is just a really bizarre world we live in. And to me, it's very close to being meaningless, but the meaning is just to enjoy stuff. So I feel like last year, I really just was thinking about that a lot, and so it's just a landscape of all the songs in a way. You know, it's like even the joyous songs, they are celebrating the hopelessness, just celebrating everything that's ever been good. You know what I mean?

Yes, totally. So, your shows are notoriously crazy. What do you miss most about performing live?

I missed just chatting. It's flattering when you go into the audience, and someone's like, "Hey, I really love you" or like "Hey, I met my partner at your show” and stuff like that is really nice and fun. And just the social aspect of it, and as well, I just love live music. It's pretty fun to play it, and it'll be so fun playing the new music as well.

How is this album going to be different from your other ones?

It's pretty different, I reckon. The first album we did, we recorded in Sheffield, and we recorded on the back of touring for four months straight, pretty much. So the whole process was different, because obviously, with this one we hadn't written on the road, we had just been writing from home. But when I listened to the music, the boys really leveled up. They're all self-taught musicians none of them had lessons before. That's why punk is so great because anyone could pick up an instrument and play, you don't have to be so skilled. And you can kind of learn while you're doing it, and I think that's a really special thing. You don't necessarily have to be the best but you can pick up skills and like to just have fun. It's very much so about spirit, but listening to this album I think musically, the boys are really leveled up, and it sounds really good and I think lyrically as well, I've leveled up. I'm pretty proud of my lyrics and my words and how I articulate myself, which is a pretty cool thing.

[This interview has been edited for clarity and brevity purposes.]

Tags: Amy Taylor , Amyl and the Sniffers , music , new album , Comfort to Me
Support Feminist Media!
During these troubling political times, independent feminist media is more vital than ever. If our bold, uncensored reporting on women’s issues is important to you, please consider making a donation of $5, $25, $50, or whatever you can afford, to protect and sustain BUST.com.
Thanks so much—we can’t spell BUST without U.