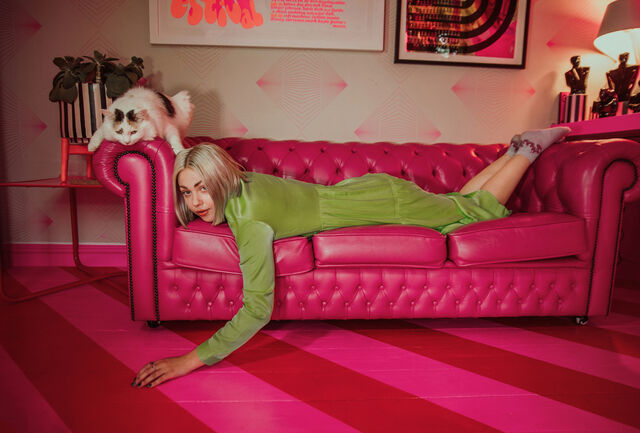 Lauran Hibberd has her tongue firmly planted in her cheek and her heart right on her sleeve with her latest EP “Goober.” Intimate, real, and with enough wit to fill a comedy club, this slacker-pop star’s music has a sound reminiscent of Weezer, Courtney Barnett, and Sløtface while still remaining completely unique. Hibberd’s second EP, following the 2019 release of “Everything is Dogs,” finds her more thoughtful and certainly more confident without sacrificing her hyperspecific and relatable lyricism. Produced by Suzy Shinn (known for her work with Weezer, Fall Out Boy, Dua Lipa, Panic! At The Disco), “Goober” takes listeners on a wild ride of weaponized nudes, ditching douchebags, attending your own funeral, and chronic mundanity. “Goober” is streaming on all platforms July 30, also known as right fucking now!

Here, Hibberd gives us a peek into her brain, artistic process, and influences in this BUST exclusive.

What first got you into music? Was there a particular song/performance that made you say, “Woah I want to do that!”

I was really just trying to find a hobby or something that I was good at, because I was just growing up and nothing was really tickling me. All of my friends had kind of found their thing and I felt like that one person who wasn't quite connecting with anything I was doing. So I had a one off guitar lesson. And I actually ended up really fancying the guitar teacher, and I think that kept me going back for lessons. Before I knew it, I was over my crush on him and I actually genuinely fell in love with playing guitar. It was a good way of keeping me educated as well. I didn't want to let him down so I'd rehearse all week to make sure I was really good for the next lesson.

Who are your musical inspirations?

I was really into folk music when I first started and there's an album by Laura Marlin called Alas I Cannot Swim, and I remember thinking, “I can't believe this is real, this is so good.” My parents aren't massive music fans, they just kind of stick the radio on. It was one of those things where I hadn't really tasted real music, so I was very very excited when I first discovered it. After that, I ended up working with some producers where I live on the Isle of Wight and they gave me the Weezer record “Blue Album.” And I was in a head spin again, having not really listened to proper rock music. I was like, “This is unbelievable.” I've got the CD stuck in my car and I could literally sing it to you from start to finish now.

Would you say your lyrics are mostly inspired by your life experiences?

I find it quite difficult to write about things that I can't relate to because what I tend to do is take a bad situation or something that's happened to me, and it kind of comes out of me in a comedic, self-deprecating way, because that's how I deal with things in my life. So, if someone dumped me, I would make a joke about it, and just cry in a wardrobe somewhere when no one was looking—that's how I deal with stuff. I think songwriting wise, it helps me get all of that out, laugh at myself, be honest with the situation, and then move on from it

So you seem to lean a lot into humor, your songs are hilarious. Do you feel like humor is something that really drives your music and is an essential part of it?

One-hundred percent. I think having a personality and having it shine through in everything you do as an artist is really important. I remember going to a festival when I was really young. My friends sort of dragged me along and I've no idea who [the artist] was, no idea what any of the songs were, but he was so funny in between songs that I thought, “That was the most awesome half hour of my weekend.” He could get away with anything from then on. And because I was nervous performing, to start out, my plan was, "let's win them over and get a laugh in," so then they might forgive me if I mess up all my songs or whatever. That's become a bit of a trademark of mine, to always be dry humored, be witty, and just cover everything with sarcasm.

Could you tell me a bit more about the artistic process of making this EP?

Yeah, I this EP has been a bit of an eye opener for me because I had so much time to get it right that, I think I overthought it a lot. My first EP was very much like a happy accident. It was put together really fast and it sounded great for what it was at the time, but I feel like this EP is a lot more. It's been thought about and crafted to be a certain way, and I've had time to really go in on each song, and push to make sure every lyric is the best it can be. I’ve been working with a producer out in L.A., who did the last Weezer record, Suzy Shen. She's been managing to shake things up—I'll be like singing a verse, and she'll be like, "Don't sing it, shout it." There are so many things that I've learned that are all sort of festering in this EP—I feel like it's bubbling into an album.

How do you feel your sound has changed since Everything is Dogs?

My sound is definitely evolving. I think Everything is Dogs painted me in this slackery pop kind of genre which I was happy with because it was happy-go-lucky, funny, rock music and that's still the core of what I do. But I've added so many other references now, and there's more intelligence and thought in it now. As I've grown in confidence I have found myself in this lane where not many people seem to be musically. It's really fun for me to keep pushing on that. I haven't just settled with making funny rock music. I've said, "OK, what else can I add to this? What if I start doing spoken word? What if I add loads of synths? What if I write about if I was at my own funeral?"

How did your collaboration with Lydia Night come to be and what was the process like?

I toured with the Regrettes, which is Lydia’s band, in 2019. And I just loved them, I could not love them any more. They were so nice and the tour was so fun. And we always said, "Oh yeah, we'll keep in touch," and we were always on Instagram kind of chatting. Then I wrote, “How am I still alive?” and I was like, “For some reason, I can just hear Lydia on this.” I felt like it was a track that was influenced by that tour. So I sent it to her and I was like, “Oh, if you have a minute, have a listen and tell me what you think.” She came back in 10 minutes and was like, “I love it!” So I said, “Do you want to sing on it?” And she said, “Hell yeah.” I was like, "Oh my God, this is crazy. I'm no one, but she said she was up for it." We made it happen and she managed to put her own spin on it and it felt like one of those things that was just meant to happen, because it all fell into place really organically and easily.

What kind of person do you hope to reach with your music?

I want to be the sort of artist who maybe younger girls will think of and say, “Oh, I really want to go to this concert—please take me,” and then their dad has to go along with them and he stands at the back of the room and all the girls go to the front. At the end, I want the younger girls to be like, “Oh my God that was so good,” and I want the dad to be like, “Do you know what? That was actually pretty good.” I want to get the rock dads, as well as the young girls. It's all about the dads. If they’re guitar teachers it also helps.

What’s one question you never get asked but wish you did?

I sometimes wish I was asked a bit more about what it's like where I'm from, because I'm from a really small island off the south coast of the U.K. called The Isle of Wight. And nothing goes on here at all, and everyone knows everyone. It's one of those things that’s really interesting for me to talk about because we're so far away from London in some respects and we sometimes go to festivals and people say, “Where are you from?” and they don't even know it's real. Coming from a place like this and having this small-town nature, that doesn't really leave you. So when I go and meet people in London, they're always really shocked by how open I am. Like, I'd say hi to everyone I pass on the street. If you do that, other people look at you like you're crazy. I'm just this little farm girl, even though I don’t even live on a farm. That's how I feel all the time.

Tags: Lauran Hibberd , Goober , Lydia Night , pop , brit-pop , music , interview
Support Feminist Media!
During these troubling political times, independent feminist media is more vital than ever. If our bold, uncensored reporting on women’s issues is important to you, please consider making a donation of $5, $25, $50, or whatever you can afford, to protect and sustain BUST.com.
Thanks so much—we can’t spell BUST without U.