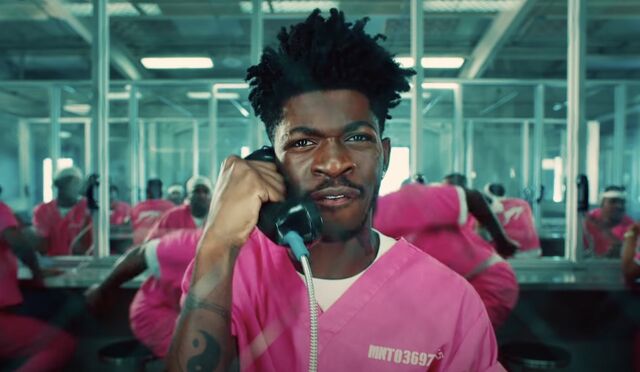 As we have all come to expect out of Lil Nas X, the video is pretty spectacular. It begins with him being sentenced to 5 years in Montero State Prison (an allusion to his Satan shoe legal troubles with Nike), where his life as an inmate includes hot pink uniforms, impeccable naked shower choreography, a Shawshank Redemption-style escape, and finally, a prison-break that has every inmate dancing out of the barbed-wire gates.

There are even a few cameos, with Colton Haynes appearing as a prison guard and Jack Harlow, who also performs on the song, in an electric chair.

The story is written by Lil Nas X himself, and it was no arbitrary choice to set it in a prison. The video is a fundraiser for The Bail Project, an organization that fights mass incarceration through its National Revolving Bail Fund. Together with Lil Nas X, the organization has formed the Bail X Fund, to encourage others to help end cash bail.

Cash bail requirements have a system of wealth-based incarceration in which people with money can pay to be let out of jail during their legal proceedings, while people who cannot afford their bail must stay in prison. This disproportionately impacts people of color.

In a statement, the “Old Town Road” musician said:

“Music is the way I fight for liberation. It’s my act of resistance. But I know that true freedom requires real change in how the criminal justice system works. Starting with cash bail. This isn’t just theoretical for me. It’s personal. I know the pain that incarceration brings to a family. And I know the disproportionate impact cash bail has on Black Americans...so I’m doing something about it and I invite you to join me. Ending cash bail is one of the most important civil rights issues of our time. Donate what you can to the Bail X Fund. Let’s bring people home & let’s fight for equality.”

To help end cash bail, you can donate to the Bail X Fund here.

Lil Nas X Ignites Satanic Panic With His Haunted, Celestial Music Video For "Montero (Call Me By Your Name)"

Tags: Lil Nas X , Montero , The Bail Project , Industry Baby , activism , homoerotic
Support Feminist Media!
During these troubling political times, independent feminist media is more vital than ever. If our bold, uncensored reporting on women’s issues is important to you, please consider making a donation of $5, $25, $50, or whatever you can afford, to protect and sustain BUST.com.
Thanks so much—we can’t spell BUST without U.