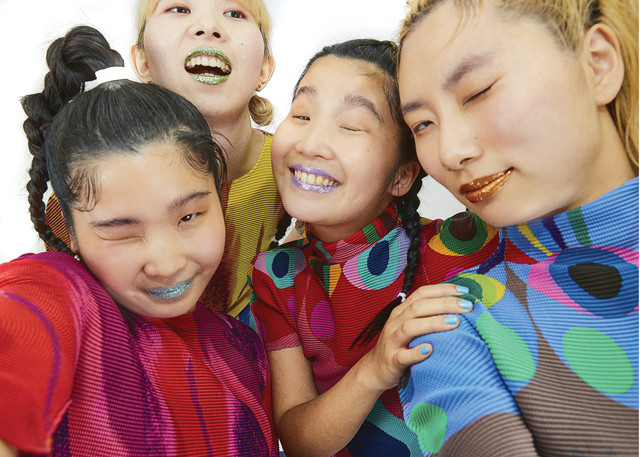 CHAI’s latest album, WINK, is chicken soup for the pandemic-ravaged soul. Though, in this case, it feels appropriate to swap the soup for the karaage (Japanese fried chicken) that earns a sultry dedication on the Tokyo-based band’s third LP. To help cope with COVID isolation, CHAI “made an album that was like a friend,” lead singer/keyboardist MANA says through the band’s interpreter Rena Tyner. (The four-piece prefers to remain surname-less.) “It’s an album that I can cry to, get mad at, and get happy with.” MANA and her twin sister KANA (guitarist), along with bassist/lyricist YUUKI, and drummer YUNI, created, via Zoom, the musical equivalent of comfort food. Unable to see anyone IRL, they found companionship in doughnuts (on the punny “Donuts Mind If I Do”), homemade salmon rice balls (on nostalgic closer “Salty”), and chocolate chips. The latter is a sweet substitution on the seductive body-posi anthem “Maybe Chocolate Chips.” “I have a friend who has a mole by his lip, a very large one,” YUUKI says. “One time we were talking, and he said, ‘This isn’t my mole, it’s my chocolate chip.’ It made me laugh.”

CHAI has always had a fondness for junk food. (“Fell in Love/Horechatta” off their 2017 debut PINK is *chef’s kiss*.) But on WINK, the band’s munchies were food for thought as they considered the kind of quarantine record they wanted to make. “The music we perform is great and I love it, of course,” MANA says. “But there’s something different between live music and the music that I listen to at home.” Using work-from-home playlists (Mac Miller, Lizzo, TLC’s “Waterfalls”) as inspiration, CHAI created a genre-defying album that expands upon their neo-kawaii or “new cute” aesthetic. WINK “reflects what I truly love to listen to,” MANA says. “Everything is 100 percent from my heart.”

Lockdown actually afforded the band creative freedom. Unlike 2019’s PUNK, they didn’t have to make this album while on tour. There were no set deadlines, so they took their time—seven months, to be exact. The result is CHAI’s most confident record to date, which MANA says is no coincidence. “I literally didn’t have to think about certain things I usually had to think about, which gave me more time to think about other things.” Including the Black Lives Matter protests that erupted across the U.S. in the wake of George Floyd’s death. “I had never seen that before on TV,” YUUKI says. “I was shocked and concerned, but it also raised a different type of feeling in me.” Those mixed emotions led to “ACTION,” a rallying cry she hopes will inspire people to “promote better actions around the world.” CHAI isn’t sure when they will hit the road next, but their focus is the future. They hope to one day win a Grammy and possibly write a cookbook. YUNI, who often posts cooking how-tos on CHAI’s TikTok, would have to take the lead, her bandmates say, agreeing it would make for “good merch.”