Halsey Unveils the Artwork for Her New Album, “If I Can't Have Love, I Want Power," And It's Stunning 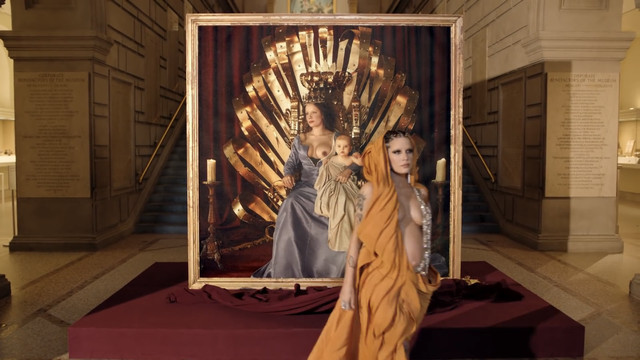 Halsey has unveiled the cover art for her latest album, “If I Can’t Have Love, I Want Power,” complete with a video tour of the Metropolitan Museum of Art. In the 13-minute-long silent film, Halsey is lavishly dressed as she walks barefoot around the famous New York landmark, looking at various artworks depicting motherhood, including Duccio Di Buoninsegna’s ‘Madonna and Child’, as she cradles her own baby bump. The singer, who announced her pregnancy back in February, could have stepped out of one of the paintings herself, appearing with charcoal eyelids, a dress accentuating both her curves and pregnant belly, and draped dramatically from head to toe in a gold cloth.

The video culminates with Halsey staring silently into the camera before yanking a curtain from a painting of her album cover. Inspired by Renaissance art, the star is shown regal and relaxed as she sits on a golden throne, one breast exposed, holding a baby on her lap.

The image reflects Halsey’s desire to reconcile the perceptions of the female body as either sexual or maternal. In a recent Instagram post, she explained that her latest release would be a concept album exploring "the joys and horrors of pregnancy and childbirth. " The singer further explained that this journey has made her want to explore the Madonna/Whore complex; the idea that a woman is either pure and undesirable, or immoral and desirable - two categories which subconsciously continue to define female artists.

The album represents a wider defiance against the quietly accepted rules of the music industry, which often see motherhood mark a premature grave, or at least decline, for the careers of female artists. Two options tend to arise; their star fizzles due to a perceived lack of sex appeal and marketability, or they survive the transition only by undergoing a series of distracting image changes.

On another note, Halsey has taken her pregnancy as an opportunity to de-commodify her body and shatter the lens through which it has been viewed both publicly and privately. The female body and its vulnerability have been a recurring focus for Halsey throughout her career: in an emotional speech at a women’s’ march in New York back in 2018, she delivered a poem in which she described the cycle of sexual assault she had experienced; from childhood to her teenage years and into her career – and the harsh reality that superstardom does not make her immune to it still.

The new album is a triumphant celebration of the convergence of Halsey’s ever-thriving career with her joy for a pregnancy she was not sure would be possible (she has previously spoken about her diagnosis of endometriosis, which carries risks of infertility). In a 2016 interview with Rolling Stone, she also revealed how she suffered a miscarriage right before a concert, and made the painful decision to perform, nevertheless. The singer has said she blamed herself, believing the miscarriage to be a result of the stress touring had placed on her body: “That was the moment of my life where I thought to myself, ‘I don’t feel like a fucking human being anymore.’ This thing, this music, Halsey, whatever it is that I’m doing, took precedence and priority over every decision that I made regarding this entire situation from the moment I found out until the moment it went wrong.”

It is a powerful moment to see Halsey stray into the unmarked territory of merging her artistry so explicitly with her role as a mother: “My body has belonged to the world in many different ways the past few years, and this image is my means of reclaiming my autonomy and establishing my pride and strength as a life force for my human being.”

'If I Can't Have Love, I Want Power" is set to be released on August 27th, via Capital Records.

Tags: Halsey , If I Can't Have Love , I Want Power , metropolitan museum of art , pregnancy , motherhood , madonna-whore complex , halsey's new album. , feminist , mothers
Support Feminist Media!
During these troubling political times, independent feminist media is more vital than ever. If our bold, uncensored reporting on women’s issues is important to you, please consider making a donation of $5, $25, $50, or whatever you can afford, to protect and sustain BUST.com.
Thanks so much—we can’t spell BUST without U.