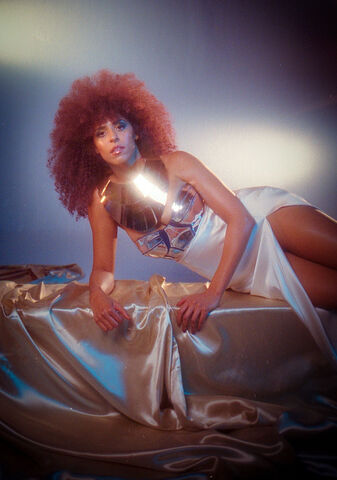 Singer-songwriter Gavin Turek is not only magical, but a woman with integrity and heart. Turek made strides with her mini-album, You’re Invited, back in 2015 and took the world by storm with her 2017 EP, Good Look For You. Making her graceful return to music with her newest single “Illusions," Turek wants to make one thing clear to her listeners: with resilience, comes great rewards. I had the pleasure of getting to know Turek as we discussed “Illusions," her upcoming album Madame Gold, and more.

What was the creative process behind your video for "Illusions"?

It was a magical process in every way. I had written the song with my producer, Chris Hartz, and it was the most natural song to write lyrically off the album. I had the concept of being in this relationship that you want to protect and cherish, but you know that you are living a lie [or] protecting an illusion. I think it’s a perfect metaphor for my relationship with music.

I write all of my treatments and conceptualize all of the visuals that I make. Initially, I had this picture of Goldfinger, and when we were planning the album I had thought about it. I [thought] if I’m talking about [Illusions], and it’s in the element of elusiveness, illusion, and love, maybe a love between two people that are of two different planets. It would be so cool to capture me as an embodiment of that. Something that is otherworldly, which is the theme [for this album].

Tell me about the preparation for this newest project and what it was like to get back to recording music again.

After I was touring for a bit to promote [my last project], live shows and performing had always been a priority of mine. I guess I’m really old school in that way; I have a hard time multitasking in terms of being on the road and writing a new project at the same time. When I got back to the studio, I always had the intention of making an album, something that was a full body of work. The whole process surprised me, which I think is beautiful and painful at the same time. The start of it was exciting, and then the longer it took, the harder it was to get to the bottom of what I was feeling and expose myself as a songwriter. I felt so much imposed pressure that I needed to make something Oscar-worthy, as this is my first full-length album. A few months into the process, I was caught in that self-critical cycle. It was a cycle of trying things out that I thought were going to represent a moment or feeling in an authentic way.

The person that started this album is a totally different person [today]. That goes to show it was meant to take this long and was meant to be a process because I was changing internally. Now, I can look back on [this] and say I’m still not where I want to be internally, but I’ve grown and [treat] creating as a healing process.

What are you most excited about in releasing Madame Gold?

Connecting with people that have been supporting and believing in me. The fan base that I do have, they care. Last year, I took a social media break and I had so many people that I’ve never met before just reach out and ask, “Hey, how are you doing? Are you okay?” I want to let them know that not only am I okay, but I am still fighting. I fight every day to keep going [and] I want them to see that in themselves. It’s not so much about selling a certain amount or having a certain amount of streams; it’s way more about having genuine connections with people and being vulnerable in the process.

As an artist, how do you feel that you have grown the most creatively?

I think I am really hard on myself. If I were the master of [my] career, I would have done everything differently. [However], I’m not and thank god that I can’t control everything. I was in a relationship a long time ago, and I know for a fact if I hadn’t left that relationship, I would not be doing music and be pursuing this career in the way that I am. As an artist, I am proud of those moments. I think of the personal decisions that were uncomfortable and painful, but ultimately led me to pursue something that I love.

Creatively and sonically, I have experimented a lot. I’m proud of the fact that I’ve continued to [do that]. No matter if I was genre-hopping or genre-bending, I’m very fluid [in that way] and I’m proud that I continue to take risks and not stay in a box.

I would want to be remembered as someone who did not give up on herself. Someone that was confident enough in herself to be genuinely supportive and encouraging of others. When I think of the people that have had the most impact on me, it’s those that have encouraged me and been genuinely loving. People remember how you make them feel, and I want to get out of my own way enough to be able to focus on someone else and uplift them.

You can check out the video for “Illusions” below.

You can pre-order Madame Gold here.