Violinist and Live Show Designer Laura Escudé Discusses The Making Of Transmute And Her Journey In The Music Industry: BUST Interview

A lot goes into making a live performance memorable and worthy of watching. Whether it’s the talent that’s being showcased, the set design, or even the use of lighting, everything about making a good show is crucial. What many people may not question is who tackles all of the fine details into producing and designing something like a concert or a live music production. That is where Laura Escudè comes in.

Multi-talented artist and world-famous live show designer, Escudè is a woman with a vision of bringing people together and helping  other creatives expand their capabilities in the music world. With her company, Transmute, Escudè has created multiple programs designed to help artists get the mentorship and guidance that they need to elevate their craft to the next level. I had the pleasure of speaking with her as we discussed how she got into music, her favorite and least favorite aspects of her work, and her overall journey.

Getting into our first question, I wanted to know what your origin story is. How did you get into producing and designing live shows?

So I started out as a violinist and played classical music. When I was in high school, I discovered the Dave Matthews Band and they had a violin player that was [jamming out] and playing electric violin. That kind of sowed the seed of knowing that there was more to playing the violin than just classical music, but I didn’t know how to achieve that.

When I got to college, I got into the electronic music scene and started experimenting with playing violin over DJ music. From there, I started learning how to produce my own music, and fell in love with it all. My best friend was dating George Clinton’s son’s producer, and we were in the studio with George and a bunch of other people. I started learning how to produce music by looking over their shoulders and we were making songs together.

When I came out to LA in 2004, I started working at this company called M-Audio, and was doing technical support for them. I [also] worked at this company called Ableton, which makes the software Ableton Live, and started becoming well known as someone who used the software and was a professional; I started doing more live performances and such. That’s how I got into live show programming and design, and also working with different artists.

My first big gig was with Cirque du Soleil in Vegas, and after that, I ended up touring with Kanye West for about seven years. I branched out in between [doing] my own stuff and then [focusing on] working with other artists.

Do you enjoy the technical and logistic side of what you do, or the creative side more?

I think for a time it was more of the technical side [that] I enjoyed more. I’m good at both, and switching between the left and right brain. For a while, I just wanted to figure out the craziest things. Technically, that was the route for me using technology to figure out how to do that. But I think now I’m more interested in the creativity and [the] artistry of it, because that really feeds my soul’s purpose. 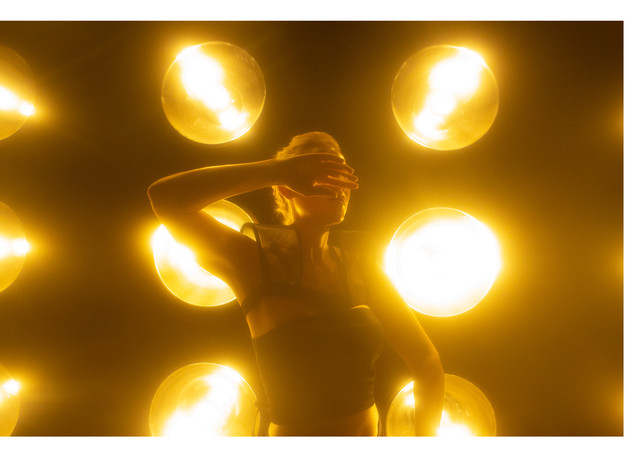 It’s known that the music industry is more male-dominated, especially in the field of work that you do. What were your experiences navigating that?

When I got started doing live show playback and programming, there were no other women that I knew of that did that job. It was challenging, because I didn’t have role models to let me in the role. I was lucky enough to have many men that were kind to me and treated me with respect. I definitely had negative experiences [and] sought to prove myself early on, to show that I knew what I was doing.

Now, there’s more of an open space, and there’s more women that are coming into the field. A big part of my work has been training other people to do the same work and to get into the space, and I think it’s important to represent women, be inclusive, and show that it is possible. It’s exciting to see that it has been catching on over the past couple of years.

That’s why I love doing interviews and doing press because every time I do it, at least a couple of women say, “I read your article,” or “I saw you and it’s inspired me to look into doing what you do”. It’s important for me to be at the forefront of this movement.

Getting into your company, Transmute, what was the process of creating something like this?

I started Transmute a few years ago. After working with these big artists like Kanye and Miguel, doing shows like the Grammys and American Idol, there were a lot of independent artists that were coming to me. I saw a way that I could distill all of this knowledge that I gained over the past twenty years in the business into a program to help artists accelerate their craft in the realm of live performance. Independent artists don’t have a budget to hire someone like me to go on tour with them, because it’s a lot and you have to get to that level.

I’m an independent artist myself, and I perform and do all of my own tech stuff on stage, and enjoy that. But when I was first starting out, it was a challenge for me because I didn’t have anyone to show me how to perform and all of the tools. So, I decided to create a program to help artists accelerate their craft and the way that they are performing with technology, in the way that I wish someone had done for me.

We all discover things on our own time, and the way that technology is now, it’s much more ubiquitous. It’s great, especially in this past year, that a lot of people have been learning online from me and my team. It’s been really exciting.

What would you say is the hardest part of what you do?

I think juggling so many different components; I don’t do just one thing, so it is a challenge sometimes because I need to remind myself to meditate and figure out what is the next move that I want to make. I get a lot of questions, and a lot of people want to work with me, so now I  am getting better at picking and choosing the things that really resonate with me. I’ve been doing more of my personal work over the past couple of years, and not everything resonates. So, learning to say no has been the hardest thing.

How do you feel that you have grown the most over the entirety of your career?

I think I’ve become more myself, especially over the past couple of years. When I was first starting out, I was trying to make music that I thought other people would like, and now I am making music that I like, and if other people like it, that’s cool. I’m less focused on what other people think, which is really freeing because this is what I'm going to do. I don’t worry so much about how it’s going to perform or how many plays I am going to get. You can really get lost in that, and it can be really challenging and get you down; people put a lot of stock in it and it’s important to get numbers, but that can’t be the source of your happiness.

I would love to be remembered as someone who brings joy to people’s lives, whether it’s through my music; or through my education; or through helping them with their shows, etc. I have followed different paths throughout my career, and so [I want to] be remembered as someone who did not follow a straight path. It all just comes down to inspiring other people and being a part of something bigger than myself.

You can check out the rest of Escudè's content here. Check out her EP, Enoughness here.