Details
BY Melody Heald
IN Music
Published: 27 May 2021 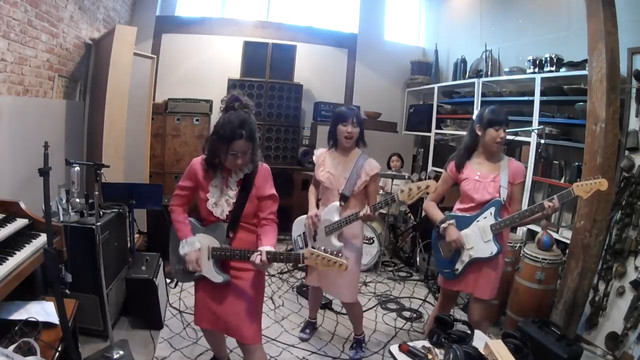 L.A.-based band The Linda Lindas scored a record deal after performing their original song “Racist, Sexist Boy” at the Los Angeles Public Library. Hours after their performance was recorded and posted, the song went viral, receiving millions of views and garnering the attention of well-known musicians such as Paramore’s lead singer Hayley Williams and Rage Against the Machine’s Tom Morello.

Don't mess with The Linda Lindas.

This talented group was founded in 2018 and consists of four members: Lucia, 14; her sister Mila, 10, who's in charge of vocals and drums; their cousin Eloise, 13, (vocals, bass); and friend Bela, 16. The Linda Lindas describe their music as “embodying the spirit of original punk, power pop and new wave through today’s ears, eyes and minds,” Variety reported.

The band’s song “Racist, Sexist Boy” was inspired by a racist experience Mila and Eloise encountered. (The band members are Asian and Latinx.) Once the pandemic hit, a boy told Mila that his father didn’t want him talking to Chinese people. Mila admitted to the boy that she is Chinese, and he backed away, The Guardian reported. This encounter is what fueled the song.

The Linda Lindas are quickly rising to fame, and they’ve already performed with a number of bands, such as: Best Coast, Money Mark, Alice Bag, and Bikini Kill. When Bikini Kill reunited in 2019, they chose The Linda Lindas to open for them. In addition, they’ve written a song for the Netflix documentary, The Claudia Kishi Club, which is about a character who provided Asian American representation for young girls in the ’80s and ’90s when not much else of popular culture did, Variety reported.

Today, the all-girl punk band is officially signed to Epitaph Records. Epitaph Records approached the band after “Racist, Sexist Boy” went viral. "With their explosive and authentic collision of garage-punk, power-pop, and new wave, The Linda Lindas are an exciting new addition to the Epitaph roster," Broadway World reported.

"Epitaph offered us full creative control and they're really supportive of what we want to do as a band," Lucia told Broadway World. "We're really happy about signing with them, and we can't wait to put out more music."

Musician Cassandra Violet Opens Up About The Social Pressures Of The "Biological Clock," The Meaning Behind Her New Music Video And Album, And The Everyday Anxieties We All Face: BUST Interview

Tags: The Linda Lindas , Epitaph Records , L.A. Public Library , Racist Sexist Boy , punk rock , girl band , music
Support Feminist Media!
During these troubling political times, independent feminist media is more vital than ever. If our bold, uncensored reporting on women’s issues is important to you, please consider making a donation of $5, $25, $50, or whatever you can afford, to protect and sustain BUST.com.
Thanks so much—we can’t spell BUST without U.