Details
BY Stamatina Copulos
IN Music
Published: 20 May 2021 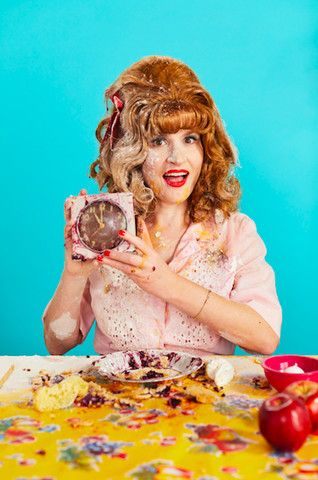 The pandemic saw millions of enthralling submissions to domesticity content. Sourdough bread, cleaning, and delayed pregnancies littered many people's Instagram feeds. To the millennial woman who has fought off the pressures of the settled life, surrender seemed to be the only option.

“It felt really oppressive,” said Cassandra Violet, an LA-native who just released her debut album Maybe It’s Not Too Late in April. “You have to be doing something productive.” And for young women, that generally means having a baby. 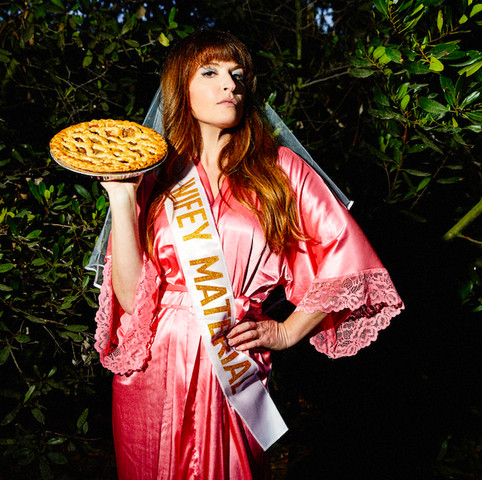 The second song on Violet’s new album, "Tick Tick," deals with the social pressures of the "biological clock." The indulgent nature of social media and seeing what everyone is doing with their lives drives the guilt of not bending to the external pressures of using this time “productively.” Even though births are going down, she feels like everyone on her feed is having a baby.

“From when you’re like 29 or 30 until you have a kid, there’s this blank space,” Violet said. “Everyone feels this urgency to ask you what you are doing with your life.” And if you aren’t starting a family, “what could you be doing?”

“There’s this very real deadline that’s pushing up on you,” she said, addressing the anxiety that is attached to the biological clock. “It feels like everyone is a step ahead of you. And having a kid feels like the end for a lot of people. It’s inescapable.”

The social pressure isn’t necessary, but the physical pressure is something that can't just go away. Cisgender men cannot give birth, so while women wish everyone would stop shoving baby fever in their faces, their uteri are the real culprits, re: that fun little monthly reminder that you’re "not doing your part" for society.

“It feels like a form of capitalism,” Violet said, regarding the concept that a woman’s most important contribution to society is her child. The irony is that capitalism is supposed to be the “freer” way of doing things, yet it thrives on a gendered hierarchy that demands offspring.

Violet’s music video for “Tick Tick,” her directorial debut, plays off the domestic trap women find themselves in. A woman camped out in 50’s-era attire, Violet’s “domestic goddess” is trying to bake an apple pie. As she attempts to produce a perfect pastry, floating hands make her task more and more difficult, ruining her creation. The concept plays off of Violet’s apprehensiveness to the traditional female gender sphere. 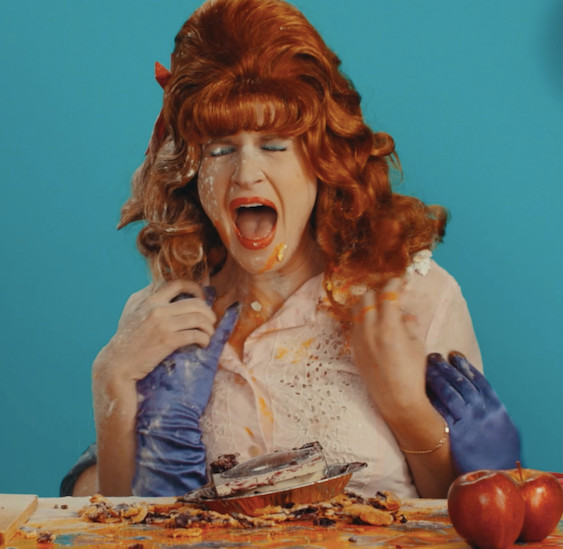 “I’ve always had this conflict within myself,” she said. “A push-pull between fucking the norm and the traditional domestic trappings of femininity. I’ve always fought them but also used them.” The struggle in the video demonstrates the performative nature of the "perfect home-cooked meal" posted on Instagram, and the reality that it took the person six tries to get there.

“The hands come in, ruining her life,” Violet said of the video, as the woman is “trying harder to control” her kitchen. She is trying to participate in domesticity, attempting to be the perfect housewife, but the hands keep getting in the way.

“The hands are external and internal pressures,” Violet said. “They are all these things that make it so you can’t enjoy the present"—"all these things” being every aunt at Thanksgiving that nags you about when you’re going to start having kids, taking away the perfect moment you were just having with your dinner.

At the end of the song, the apple pie is done. She pulls it out of the oven, but the hands take the pie and rip it apart, eventually revealing “this huge impending clock” at the center of the pie. Even if women get to enjoy those perfect moments, the clock will always be there.

The rest of Violet’s album deals with more anxieties and senses of “impending doom.” It feels like a pandemic album, even though all of the songs were recorded before the world shut down.

Many of the songs continue the societal existentialism. “Maybe It’s Not Too Late” is a folk song that tells the story of a married, working man in California who can’t seem to find happiness. He keeps building goals, thinking, “One day, I’ll accomplish my dream,” but never gets there.

“Everyone is pursuing domestic happiness or bliss or what it should be,” Violet said. “But if you accomplish your dreams, will you be happy?” 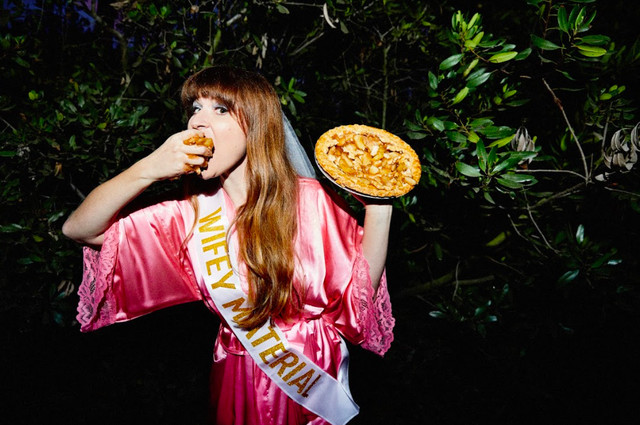 “This whole album is about anxiety,” she said. “It’s very dark in a lot of ways, but it can also be very silly.”

Her second most-popular song, “Swim Test,” is on the album with over 11,000 streams on Spotify. It was recorded the week before quarantine started in March 2020, but she released it in January of this year. The song is about her father, who can’t swim but still manages to keep his head above the water. The lyrics are about “trying to stay afloat when things seem very awful.”

“To Love” and “Last One” are apocalyptic yet hopeful in nature. Violet said the first song tells listeners to “be happy even if we’re going to die.” People should find that thing in life that actually makes them happy and forget that life is short. The second song is about living each day as if it is the last, continuing the irony that this album was written before the pandemic, but feels like it was written for people who have been struggling with the current state of the world.

Mixed by M83’s Joe Berry, Violet’s debut album features her other musical talents besides singing, including samples of her playing the clarinet and guitar, and of her whistling. When she’s not making albums that reveal the intricate anxieties of life, she is a high school English and theater teacher. Her most popular song “Beyond the Fray” was featured on Ozark and has over 500,000 streams on Spotify.

Cassandra Violet’s music puts into perspective the commonality of the anxieties many of us face in our day-to-day lives. It helps when we know that someone else is struggling with us—that we're not alone.

37 Problems Is A Comedy About Adulting And The Pressures Of Fertility: BUST Interview With Lisa Ebersole

Should You Attend An Egg-Freezing Party?

Tags: Cassandra Violet , Maybe It’s Not Too Late , Tick Tick , biological clock , anxiety , new music
Support Feminist Media!
During these troubling political times, independent feminist media is more vital than ever. If our bold, uncensored reporting on women’s issues is important to you, please consider making a donation of $5, $25, $50, or whatever you can afford, to protect and sustain BUST.com.
Thanks so much—we can’t spell BUST without U.