Details
BY Jamilah Lewis-Horton
IN Music
Published: 07 May 2021 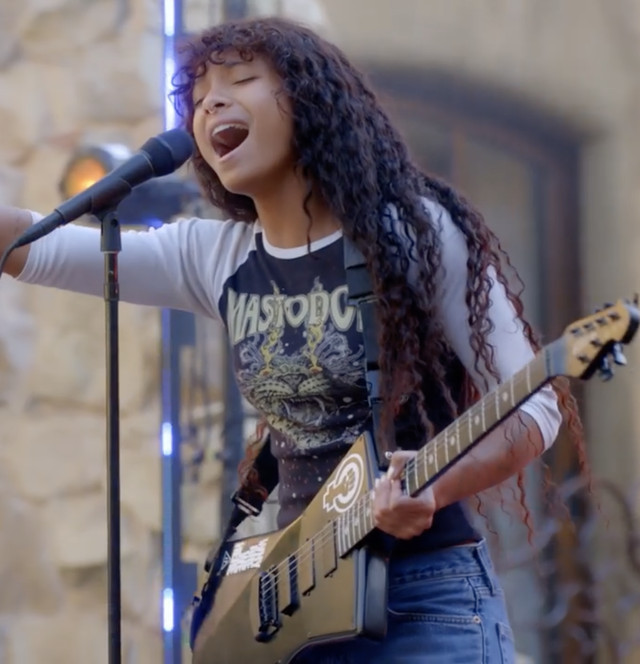 Mother’s Day weekend is off to a great start at the Pinkett-Smith residence. On a recent special edition of the show Red Table Talk, Willow Smith orchestrated one of the best gifts ever, leading her mother Jada Pinkett-Smith’s former rock band, Wicked Wisdom, in an awesome rendition of their hit song “Bleed All Over Me.”

The episode starts with Willow discussing all of the effort that went into planning this surprise months in advance. There was footage of her in rehearsals with the band, and of the entire stage production setup she managed to pull together in the backyard without her mother noticing. Once the surprise is revealed, the whole family rocks out together, with Jada’s “stank-face” becoming the ultimate marker of joy, respect, and appreciation.

Wicked Wisdom had a great run in the early 2000s. With Jada as lead singer, the metal band produced two albums, opened up for Britney Spears on tour, and performed at Ozzfest in 2005, according to Consequence Heavy. It was a stark departure from Pinkett-Smith's traditional acting career, and had a distinct impact on Willow’s developing perception of both music and womanhood.

Willow surprised Jada for Mother’s Day & got Jada’s rock band, Wicked Wisdom back together & sang one of their songs. Look at how Jada’s looking at her 🥺👸🏽🎸 pic.twitter.com/Io5L58Z6UL

“When I was, I wanna say about three or four, I went on tour with my mom and her band Wicked Wisdom,” Willow recalled. “Wicked Wisdom was lit. This is the music that I grew up around. My mother was superwoman. She was a rock star, warrior, and nurturer all in one. So unapologetically badass…I was my mom’s biggest fan.”

A recording artist herself, Willow’s own sound has taken a major turn over the past year or so. In 2020, she released a rock-infused joint album with collaborator Tyler Cole titled The Anxiety. Just a few weeks ago, she dropped a new track called “Transparent Soul” that emitted an early 2000s punk vibe, reminiscent of artists and bands among the likes of Avril Lavigne and Blink-182.

Jada must surely be proud of Willow’s accomplishments over the years, and Willow’s nod to her mother was the perfect way of honoring her legacy. “I felt like it was only right for me to pay homage to a time in her life when she showed me what womaning up really is about,” Willow remarked. Who knows? Maybe they'll form their own band someday and give us the mother-daughter bops we didn't know we needed. Watch the full episode here.

Tags: Willow Smith , Jada Pinkett-Smith , Red Table Talk , Wicked Wisdom , Mother's Day , Rock , Band , Music , Surprise , Transparent Soul , Bleed All Over Me
Support Feminist Media!
During these troubling political times, independent feminist media is more vital than ever. If our bold, uncensored reporting on women’s issues is important to you, please consider making a donation of $5, $25, $50, or whatever you can afford, to protect and sustain BUST.com.
Thanks so much—we can’t spell BUST without U.