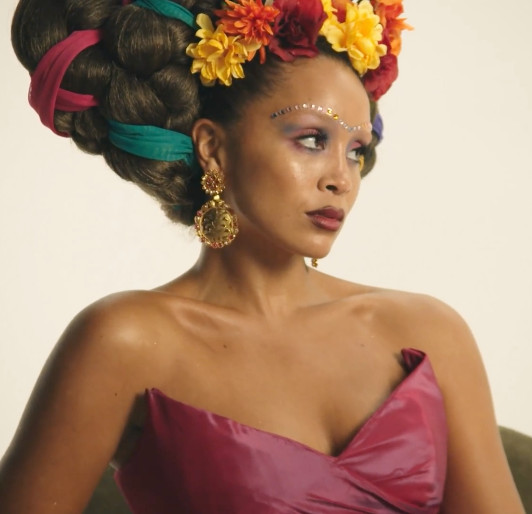 Alternative R&B dynamic duo Lion Babe is back on the music scene with a new song honoring the legendary Frida Kahlo. An iconic 20th century visual artist, Kahlo is widely celebrated for her original, highly introspective paintings that center themes of Mexican-indigenous identity, womanhood, and the human form. She specialized in self-portraiture, and is known to have used vibrant color schemes in her artwork.

Lead singer Jillian Hervey and producer Lucas Goodman have been musical collaborators for nearly a decade, but it wasn’t until they independently released their second studio album Cosmic Wind (2019) that the pair had the freedom to explore the true extent of their artistry. Now, as the lead single on their upcoming junior album Rainbow Child, Lion Babe’s “Frida Kahlo” beautifully manages to capture Kahlo’s continued relevance.

Both the song and its visual component invoke Kahlo’s spirit in a number of ways. Goodman’s light and whimsical production perfectly meshes funk and house music; it's a fun track that’ll make anyone want to move. Adorning a floral headdress, rhinestone unibrow, and several boldly patterned gowns, Hervey bears a striking resemblance to the fashionable icon. The lively pops of color incorporated into the set design become a reflection of Kahlo’s tendency to experiment with colors in both her unmistakable sense of style and artwork.

The track’s core message can be found in the hook when Hervey sings, “If you’re trying to be someone, go look where you came from. It’s all there for you.” Visually, we see her staring at her own reflection in a mirror lined with several smaller images of Kahlo herself. This is a nod to Kahlo’s distinct self-portraits, and the ways in which she sourced artistic inspiration from her own lived experience. More importantly perhaps, by honoring Kahlo in their own unique way, Lion Babe reminds listeners to look within and find ways of harnessing their own creativity.

“There is no better time to honor her life and work than today. A woman of color, gender bending, living with disability, candid about the politics of the female body and political views in general, she encourages us to claim our stories. To befriend our discomfort and invite our dreams into our reality,” read a joint statement on Lion Babe’s Instagram page. If “Frida Kahlo” is any indication of what’s to come, Rainbow Child will likely be an uptempo project rooted in self-observation and inner-knowing. Surely, their fans can't wait to see what else they have in store!