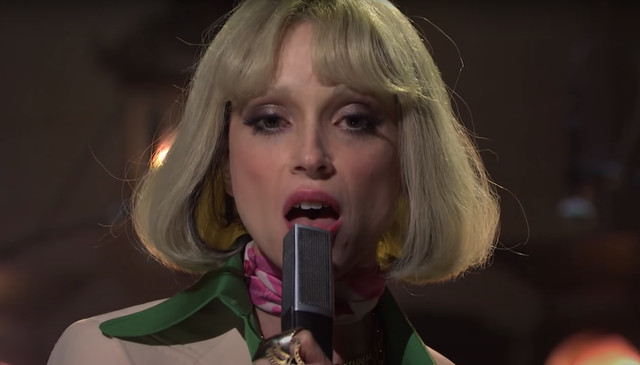 In February, posters featuring musician St. Vincent, a.k.a. Annie Clark, in a velvety burgundy suit and a Michelle Pfieffer-in-Scarface blonde bob were plastered through city streets. “Warm Wurlitzers and wit, glistening guitars and grit, with sleaze and style for days,” the poster read. “Taking you from uptown to downtown with the artist who makes you expect the unexpected. So sit back, light up, and by all means have that bourbon waiting, because… DADDY’S HOME.”

Daddy’s Home is the name of St. Vincent’s forthcoming seventh album, set for release on May 14. On March 27, Clark took to the stage during Saturday Night Live to perform the record’s first two singles, “Pay Your Way in Pain” and “The Melting of the Sun.” The SNL performance, the songs, and the visuals so far offer a glimpse of the ‘70s glam rock and the “sleaze and style” to come.

“I would say it’s the sound of being down and out Downtown in New York, 1973,” Clark said of Daddy’s Home during a February interview for The New Cue. “Glamour that hasn’t slept for three days… [I listened to] music made in New York in 1971-1976, typically post-flower child, kick the hippie idealism out of it, America’s in a recession but pre-disco, the sort of gritty, raw, wiggly, nihilistic part of that. It’s not a glamorous time, there’s a lot of dirt under the fingernails.”

The early 1970s marked a major shift in music. With the dawn of the decade came the end of The Beatles and the release of Joni Mitchell’s lonesome classic, Blue. St. Vincent references Mitchell on the second single from Daddy’s Home, “The Melting of the Sun,” which is about women who have been struck down by the entertainment industry. “People tried to quiet them when they were saying something that was righteous or true or hard to hear,” Clark said in a March interview for Rolling Stone. “[That song] in particular is a love letter to strong, brilliant female artists. Each of them survived in an environment that was in a lot of ways hostile to them.”

St. Vincent’s last record, Masseduction, came out in 2017, during the first year of the Trump administration. The political turmoil of recent years reflects the mood of the early ‘70s, when the times made way for the politico-funk of Marvin Gaye’s What’s Going On (‘71), Sly & the Family Stone’s There’s a Riot Goin’ On (‘71), and Stevie Wonder’s pivotal records Innervisions (‘73) and Songs in the Key of Life (‘76). Despite its seemingly kinky, tongue-in-cheek undertones, the title Daddy’s Home reflects a more serious event in Clark’s real life: the 2019 release of her father from a Texas prison after serving a 10-year sentence for what Clark described to Rolling Stone as “white-collar nonsense.” The song “Pay Your Way in Pain”—with its lyrics about money trouble, social rejection, and changed locks—could be referring to her dad’s suffering behind bars to pay off a debt to society.

The early singles from Daddy's Home also reflect the early '70s sonically. Both carry echoes of the sultry soul of Gaye’s Let’s Get It On (‘73) and Al Green’s Let’s Stay Together (‘72). Clark’s reference to 1973 specifically—as well as the lyric “Hello, on the dark side of the moon” from “The Melting of the Sun”—call to mind Pink Floyd’s seminal 1973 album Dark Side of the Moon. The trippy melancholia that reverberates throughout DSOTM also shows up in the loops, layers, reverbs, harmonies, and jaded lyrics emerging on Daddy’s Home.

The reference points that feel the most relevant here, though, are David Bowie’s releases of the time, from 1971’s Hunky Dory to 1976’s Station to Station. Upon the release of St. Vincent’s “Pay Your Way in Pain,” many fans noted the striking similarities between the song and Bowie’s song “Fame,” from his 1975 album Young Americans. St. Vincent’s current artistic era carries hints of a Bowie-esque androgyny that extends beyond her vintage power suits and into her amplified, rock n’ roll, devil-may-care attitude. She has always had a strong command of a stage, but on SNL, she took charge in a way that leaned less on the perfected, art-pop-robot choreography of her prior performances and more on a new fluidity and nonchalance.

“Masseduction and [the 2017] tour was so incredibly strict, whether it was the outfits I was wearing that literally constricted me, to the show being angular and rigid,” Clark told The New Cue. “When I wrapped that, I was like, ‘Oh, I just want things that are fluid and wiggly and I want this music to look like a [John] Cassavetes film...’ I wanted [Daddy’s Home] to.... tell these stories of flawed people being flawed and doing the best they can. Which is kind of what my life is.”

On the SNL stage, Clark appeared unrefined and unconstricted. She sported a fur coat draped over her shoulders and a run in her stocking; she slouched, postured, and “man-spread.” If it’s any hint of what’s to come, Daddy’s Home will be a callback to 1970s glamour and grit—but it’ll most likely be mixed with the avant-garde surprises that make St. Vincent one of the few true innovators in the contemporary pop scene.