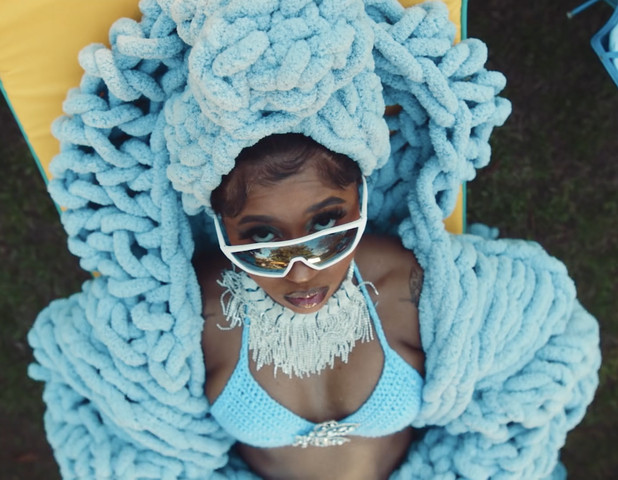 Up-and-coming rapper and singer Yung Baby Tate takes the art of the self-pep talk to higher heights in the music video for her latest hit single, “I Am.” The Georgia-born artist broke out onto the music scene six years ago with her melodic debut album ROYGBIV, and has since managed to make a name for herself in the rap game without straying too far from her R&B roots. “I Am,” track number two on Tate’s 2020 EP entitled After The Rain, is the women’s empowerment anthem we all need, feeling akin to a present day version of Destiny's Child’s "Independent Women, Pt. 1." Produced by Slade Da Monsta and featuring a verse from Tate’s musical-peer Flo Milli, the fierce track will remind anyone of just how reality shifting the words “I Am” can be. Let's get into the song’s brilliant visuals.

In one scene, she’s hosting a sleepover with a few close friends, epitomizing black girl joy and conveying the importance of female friendships.

Director Andre Muir helps Tate craft several universes in which she becomes the fiercest versions of herself. The video opens with the rapper planting herself in front of a floor length mirror. The track existentially inquires, “Who that is, bitch?”, to which Tate’s reflection powerfully proclaims that she is healthy and wealthy. That she is not only rich, but she’s also “that bitch.” That she is protected, respected, and refuses to take anyone’s shit. Tate stands there repeating everything her highly self-assured reflection says, soaking up the positive affirmations. Perhaps most notably, Tate’s reflection boasts, “I do what I want to do and I’m who I want to be, ‘cause I am me!”, which really underscores how Tate herself is the source from which all this confidence is derived.

The video then explores multiple realities where Tate lives out all of her self-proclamations. In one scene, she’s hosting a sleepover with a few close friends, epitomizing black girl joy and conveying the importance of female friendships. In another, Tate exhibits the extent of her wealth, dancing with friends before the backdrop of an enormous mansion, pricey cars, shopping bags, and male admirers. We later see Tate, Flo Milli and friends enjoying a fabulous spa day where they maximize self-care and subvert dominant notions pertaining to Black women being undeserving of luxury. All the while, Tate continues reciting these affirmations aloud and speaking everything she desires into existence. “Look in that mirror,” she encourages listeners to do the same. “Tell yourself everything that you want to hear.” In the end Tate stands before several mirrors, as all of the different versions of herself stare back at her.

The affirmation anthem and its corresponding visual have created a huge buzz among fans across all social media platforms—especially Twitter and Tik Tok. The song was released via Issa Rae’s burgeoning music label Raedio—Rae herself has been a known champion of the self pep-talk in the creation of her character “Mirror Bitch” for the popular television comedy series Insecure. In an interview with MEFEATER Magazine, while reflecting on her hit song, Tate reveals that she’d written the track’s hook without hearing the beat first. When asked to share the meaning of confidence, Tate declared, “Confidence is understanding who you are and not allowing anybody else to change that. For me, confidence might not be like, 'Oh, I think I’m the most beautiful person in the world.' But you know what you are, and nobody can tell you that you’re not. It looks different on everyone.”

Tate’s confidence has certainly become very apparent over the past few years, evidenced in both her music and in her firm presence in a male-dominated industry. She is one of just a handful of women rappers who've been nominated for the coveted 10th spot in rap-mainstay XXL Magazine's 2021 Freshman Class Roster. There's no doubt that a great future in music is on the horizon for Yung Baby Tate.

Top Image: Screenshot From "I Am" Music Video

Lil Nas X Ignites Satanic Panic With His Haunted, Celestial Music Video For "Montero (Call Me By Your Name)"