Lil Nas X Ignites Satanic Panic with his Haunted, Celestial Music Video for “Montero (Call Me By Your Name)” 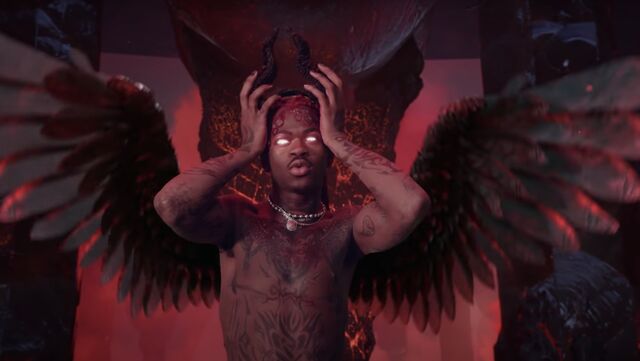 On March 26, Lil Nas X released the music video for “Montero (Call Me By Your Name),” and the internet has not known peace since.

“Montero (Call Me By Your Name)” accepts and subverts the religious themes that resign queer people to hell. With this video, Lil Nas X accepts the fate prescribed to him, goes to hell and gives a beautifully executed lapdance to the devil while he’s there. Like many queer people, Lil Nas X experienced self-hatred in his teen years due to Christian messaging about the sins of queerness.

i spent my entire teenage years hating myself because of the shit y’all preached would happen to me because i was gay. so i hope u are mad, stay mad, feel the same anger you teach us to have towards ourselves.

The release comes as hate crimes are reportedly on the rise, with 17% of hate crimes in the US being perpetrated against LGBTQ+ individuals. At a time when marginalized people are further subjugated, Lil Nas X provides an avant-garde hiatus to the dangerous realities of living as a Black, queer person in the US.

Opening in a purple-hazed portrayal of the Garden of Eden, Lil Nas X plays the role of both Eve and the Serpent. He is both the innocent and the corruptor in this scene, a reference to the inner turmoil that queer youth experience. The “sin” of homosexuality is within him, but so is the purity and pressures of Christian heteronormativity. The conflict of retaining religious morality and being seduced by the realities of human sexuality is playfully batted around the screen as Lil Nas X succumbs to his Serpent counterpart.

Lil Nas X being pitted against himself is a constant theme in this video. As the song continues we’re transported to Heaven, where Lil Nas X is held prisoner and tried by blue-haired, bored versions of himself as he sings, “I want to fuck the ones I envy.”

After admitting his sexual desire Lil Nas X is flung into Hell, but he accepts this punishment with poise. Without want or need to recover after his fall from grace, Lil Nas X is welcomed into the open doors of Hell. Strutting through the Palace of the Damned in thigh-high boots, he is determined to reach his destination, the throne of Satan. Once there, without pretense, he slithers onto the lap of Satan and stares the audience down as he seduces the devil.

This is Lil Nas X accepting his damned fate, as granted to him by Western religion, and gives that fate a lap dance. The final act of rebellion in the video is to kill the Devil and take on the horns of hell for himself.

Believe it or not, this did not go over well with the conservative Christian crowd. The most well-documented Twitter blowout that Lil Nas X was a part of this week was with Kaitlyn Bennet, otherwise known as “Ohio State gun girl.”

It's week like these that I'm thankful to be blocked by Lil Nas X pic.twitter.com/Fqn4tRzk98

What Kaitlyn Bennet, the contributors of Fox and Friends, and Candace Owens have failed to recognize is that Lil Nas X is a new breed of artist. He’s a member of Generation Z. He grew up, gay and Black, on the harsh realities of 2000s internet shitposts. Critics are not going to break him down by saying he’s turning their kids into Satanists.

Bennet Claimed to be blocked by Lil Nas X, to which he responded, “I can still see your tweets shitty pants,” referencing an incident at Ohio State where Bennett allegedly defecated in her pants at a party. Bennett then responded with “do you still see your dad?” This question hits at the two primary drivers behind “Montero (Call Me By Your Name)”: Lil Nas X’s queerness and Blackness. Bennett is either implying that Lil Nas X doesn’t have a father figure because he is Black—a frequent racist talking point—or that his father has removed himself from his son’s life because of Lil Nas X’s queerness. This is the shame and ridicule that Lil Nas X visualizes internalizing in his music video.

The two-time Grammy Award-winning artist is only beginning his musical exploration of sexuality and freedom, and he’s ready to ratio you on Twitter.

"We Persist, We Flourish": Artist Candice Hoyes Opens Up About Her Newest Single