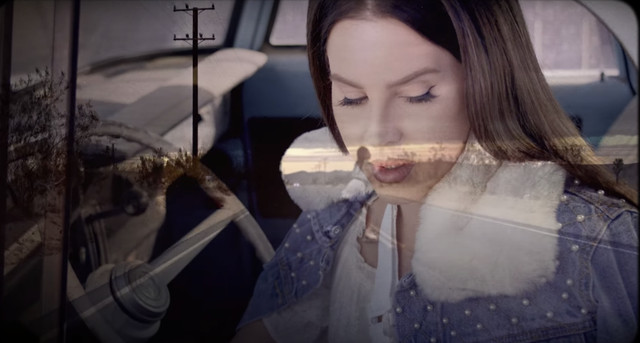 The music video for Lana Del Rey’s “White Dress” is a collage of sun-bleached visuals: wind turbines, a barking golden retriever, a desert road at dusk, and a barbecue joint with roller-skating waitstaff that appears to be planted in an airstream park.

This kind of Americana imagery has been a constant throughline in Lana Del Rey’s discography, and it’s as present as ever on her long-awaited sixth album Chemtrails Over the Country Club, which was released on March 19. The album features folk-y sounds freshened up with production by Jack Antonoff, along with lyrics that wax poetic about nostalgia, freedom, and the mythos of the American Dream. Del Rey has a history of sparking criticism for using motifs that appropriate cultures, glamorize domestic violence, and reinforce traditional—and sometimes damaging—gender norms. But on Chemtrails, Del Rey takes a step back from toxic relationships and looks inward. The result is her calmest, least controversial, and most cohesive album to date.

Despite growing up in the picturesque suburbs of Lake Placid, N.Y., and attending the $65K-a-year Kent School, Del Rey moved to the Manhattan Mobile Home trailer park in Bergen, New Jersey in her early twenties, and she has been making yachtloads of cash singing about the supposed romance of working-class life ever since. A running theme on Chemtrails is Del Rey’s disillusionment with fame. Her earlier albums narrated the achievement of a certain American Dream, but according to her latest lyrics, she now regrets dreaming that dream in the first place. “Don’t even want what’s mine/Much less the fame,” she sings in “Dark But Just a Game.” In "Dance Till We Die," she mentions being “burdened by the weight of fame." In “White Dress,” she describes wearing a white dress as a 19-year-old waitress, singing, “It kinda makes me feel like I was better off/’Cause it made me feel... like a god.” In “Tulsa Jesus Freak,” she dreams of going back to Arkansas (even though Tulsa is, of course, a city in Oklahoma).

In a 2021 article for Harper’s Bazaar, Iman Sultan wrote that “the persona that catapulted [Del Rey] to success is built on the appropriation of music, aesthetics, and storylines conceived in low-income neighborhoods populated by people of color.” Following the 2013 release of her short film Tropico, the singer came under fire for appropriating Native and Latin cultures: she pole-dances with teardrop tattoos on her face, surrounded by Latinx extras, then brandishes a gun in the desert while wearing a Native American headdress for some reason. Following the backlash, Del Rey defended herself by telling a Maxim interviewer that she lived in East Los Angeles (which has a 96.7 percent Latin American population), and that she had "always spoken Spanish in all [her] songs." Bizarrely, neither of these claims was true.

It feels like an apt progression that the sound and visuals of Chemtrails are less hip-hop and more country, a genre in which working-class life—and more specifically, working-class life as a white person—is routinely alluded to. The album embraces the countrified energy that runs through some of Del Rey’s all-time greatest ballads, like “Video Games” and “Ride,” both sonically and thematically. Del Rey picks up familiar threads from her past work, including wanderlust, loneliness, and doomed romance, while staying nestled in the territory of Overwhelmingly White Small-Town America. She has softened her “gangsta Nancy Sinatra” and “Lolita got lost in the hood” personae into the more fitting narrative of “white lady who lives comfortably in the suburbs.”

On Chemtrails, Del Rey takes a step back from toxic relationships and looks inward. The result is her calmest, least controversial, and most cohesive album to date.

The title Chemtrails Over the Country Club juxtaposes opulence with unseen evils. It’s fitting, then, that the album is inspired in part by auteur David Lynch, whose work for film and television often features a kitschy surface obscuring a more sinister underbelly. A press release for the “White Dress” music video states Lynch’s influence explicitly, while standout track “Wild at Heart” carries the same name as a (criminally underrated) 1990 movie directed by Lynch (and starring Laura Dern and Nicolas Cage). Like Lynch’s celebrated TV series Twin Peaks, Chemtrails carries a nostalgic, rosy-but-shadowy view of small-town America. But in spite of ongoing criticism of Del Rey for the “glorification of domestic abuse,” the album tones down the Lynchian themes of intermingling sex and violence and the Laura Palmer–esque, live-fast-die-young, damsel-in-distress ideology of songs like “Born to Die,” “Ultraviolence,” “Cherry,” and “How to disappear.”

Another common criticism of Del Rey concerns her depictions of female fragility and passivity, which some see as outdated. In one of Chemtrails’ early singles, “Let Me Love You Like a Woman,” Del Rey suggests she needs a man’s permission to do what she wants: “Let me love you like a woman, let me hold you like a baby, let me shine like a diamond, let me be who I’m meant to be.” Even so, such a lyric is tame and relatively harmless in comparison to some of her previous, more brutal descriptions of gender dynamics. “No more candle in the wind,” Del Rey sings, in a breathless whisper, on both “Tulsa Jesus Freak” and the Mazzy Star–informed “Yosemite.” The lyric is a clear reference to Elton John’s 1973 ballad about Marilyn Monroe (and later performed at Princess Diana’s funeral), which alludes to a certain female fragility. Del Rey’s rejection of the metaphor on Chemtrails suggests she is beginning to distance herself from the damaged self she showcased in the past.

“For me, the issue of feminism is just not an interesting concept," Del Rey famously said in an interview for a 2014 Fader profile, adding, somewhat puzzlingly, that she was more interested in “intergalactic possibilities.” When pressed by interviewer Duncan Cooper, she added, “My idea of a true feminist is a woman who feels free enough to do whatever she wants.” In the resulting profile, Cooper wrote about feminism’s fragmented view of Del Rey. "Some [feminists] criticize the way she seems to idealize powerlessness and servitude," he wrote, "while others appreciate her fluid embodiment of different identities, as well as her candor about both her desire and her weakness."

Throughout the album, Del Rey is at her best: surrounded by supportive women, untethered by the weight of her past, and basking in the fundamental freedom of Americana.

Del Rey revisited the topic of feminism more recently in her notorious “Question for the Culture” Instagram note in May 2020. “I’m not not a feminist, but there has to be a place in feminism for women who look and act like me,” she wrote. “The kind of woman who says no but men hear yes, the kind of women who are slated mercilessly for being their authentic, delicate selves, the kind of women who get their own stories and voices taken away from them by stronger women or by men who hate women.” The post sparked outrage for its indelicate wording and the fact that the women Del Rey compared herself to were all women of color (with the exception of Ariana Grande). Del Rey’s message was muddled in its execution, but the idea that feminism should embrace a woman’s weakness as well as her strength is expressed more elegantly through the medium of her most recent music.

While Del Rey doesn’t exactly weave intersectional feminist discourse into Chemtrails, she explores a more mature and sensitive sound and ethos on the album and expresses her vulnerability in healthier ways than ever before. Some of Del Rey’s prior records have been devoted to specific—and often toxic—relationships, but Chemtrails features a mere few love songs sprinkled among songs about sisterhood, dancing, and being wild and free. “It's kinda hard to find love when you're used to rollin' like a rollin' stone,” she sings on “Dance Till We Die.” “If you love me, you’ll love me because I’m wild at heart,” she sings on “Wild at Heart,” standing in contrast to the sullen, submissive messaging that has dominated much of her previous work. The Chemtrails cover features Del Rey smiling among friends. The album concludes, rather sublimely, with a cover of Joni Mitchell’s “For Free,” featuring Weyes Blood and Zella Day. Throughout the album, Del Rey is at her best: surrounded by supportive women, untethered by the weight of her past, and basking in the fundamental freedom of Americana.