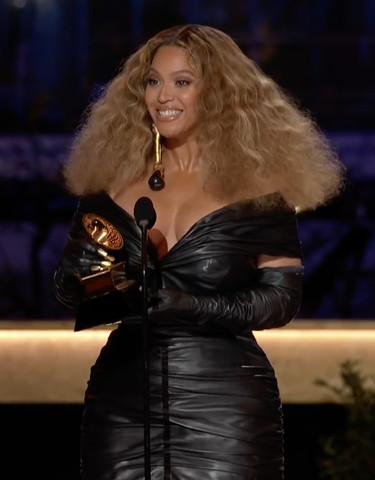 Held in celebration of this past year’s greatest achievements in music, the ceremony nominated Beyoncé for nine awards, making her the most nominated artist of the night. This comes as no surprise, considering Beyoncé had an exceptionally busy 2020. In what was arguably the best collaboration of the year, she and fellow Houston-born rap star Megan Thee Stallion released “Savage Remix,” earning them a joint award for Best Rap Performance. Beyoncé also premiered the video for “Brown Skin Girl” as part of her visual album, Black is King, in an ongoing production deal with Disney. The song, which featured her daughter Blue Ivy Carter, earned the mother/daughter pair an award for Best Music Video. Last but not least, with her win in the best R&B Performance category for her song “Black Parade,” Beyoncé became the most awarded woman in Grammy history with a grand total of 28.

In the days leading up to the ceremony, reports surfaced that Beyoncé—despite being one of the biggest, most anticipated acts in today’s entertainment landscape—notably wouldn’t be performing on the grand stage. In an interview with the Los Angeles Times, interim Chief Executive of the Recording Academy Harvey Mason remarked that, “It’s unfortunate, because she’s such a big part of the Recording Academy. We absolutely wish we had her onstage.” The singer has maintained a strenuous relationship with the Recording Academy after being snubbed for Album of the Year back in 2017. The album in question was Lemonade, a sonic and visual masterpiece which spoke to Black women’s experiences and directly addressed police brutality.

Beyond her decision not to perform, concerns were raised over whether the singer would appear for any of the evening’s festivities at all. She wouldn’t have been the only one to opt out for the night, with mega artists like The Weeknd boycotting the Recording Academy for its corrupt practices, and with fans increasingly questioning the legitimacy of an awards show that constantly marginalizes the musical accomplishments of artists of color.

However, fans were shocked and pleasantly surprised to see Beyonce and husband Jay-Z sitting near the stage. The Academy awkwardly capitalized on Knowles gracing the room with her presence, panning the camera in her direction, despite her clearly wanting to evade capture, and trapping her on stage to make a spectacle of the fact that she’d made Grammy history. Through all of the disingenuous appreciation and grandeur, Beyoncé made it clear that she was here to support her peers in music and collect her things.

In keeping with the themes of social justice and pro-Blackness that have heavily characterized her music over the past few years, “Black Parade” was released amidst last year’s Black Lives Matter uprisings in response to the police murders of George Floyd, Breonna Taylor, and Tony McDade (among others). “As an artist I believe it's my job, and all of our jobs, to reflect the times. And it’s been such a difficult time,” Beyoncé remarked in her acceptance speech. “So I wanted to uplift, encourage, and celebrate all of the beautiful Black kings and queens who continue to inspire me and inspire the whole world.” It seems only fitting that this protest song would be the one that she makes history with, as a testament to her growth as an artist and to empowered, Black artistry as a whole.

Top Photo a screenshot from the 63rd Annual Grammy Awards

Tags: Beyonce , Recording Academy , Grammy , Awards , History , Black Parade , Megan Thee Stallion , Savage Remix , Black Is King , Brown Skin Girl
Support Feminist Media!
During these troubling political times, independent feminist media is more vital than ever. If our bold, uncensored reporting on women’s issues is important to you, please consider making a donation of $5, $25, $50, or whatever you can afford, to protect and sustain BUST.com.
Thanks so much—we can’t spell BUST without U.